Tiger Woods deferred the first pick for pairings in the Presidents Cup, and then made sure he was in the opening match Thursday against the Australian who led qualifying for the International team at Royal Melbourne.

Woods is the first playing captain since Hale Irwin in the inaugural Presidents Cup in 1994, and first captain to be pick himself with a wild-card selection after winning in Japan for his 82nd career PGA Tour victory.

Woods said Steve Stricker, one of his three assistants, would serve as captain while he was playing. Stricker was the U.S. captain at the 2017 Presidents Cup. 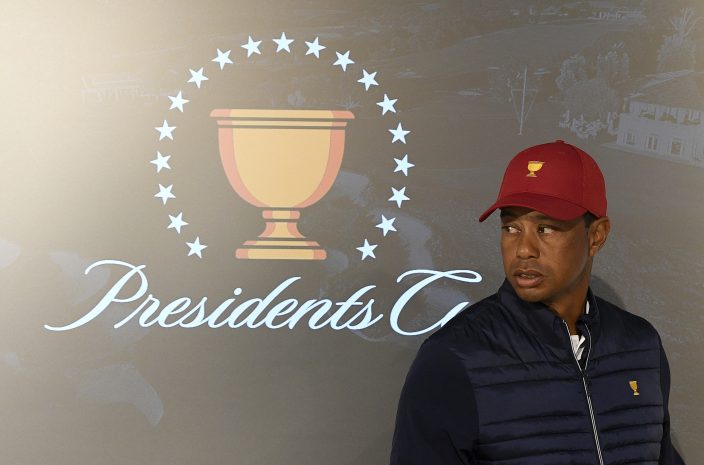 The Americans are defending champions and had the first pick who they wanted for the first of five fourballs matches. Instead, Woods let International captain Ernie Els start, and Els sent out Marc Leishman with Joaquin Niemann of Chile, one of a record-tying seven rookies on his team.

Patrick Reed, the subject of so much conversation this week from his rules violation in the Bahamas last week, is in the fourth spot with Webb Simpson. They play Hideki Matsuyama and C.T. Pan.

All five of the U.S. partnerships are new for a Presidents Cup or a Ryder Cup. 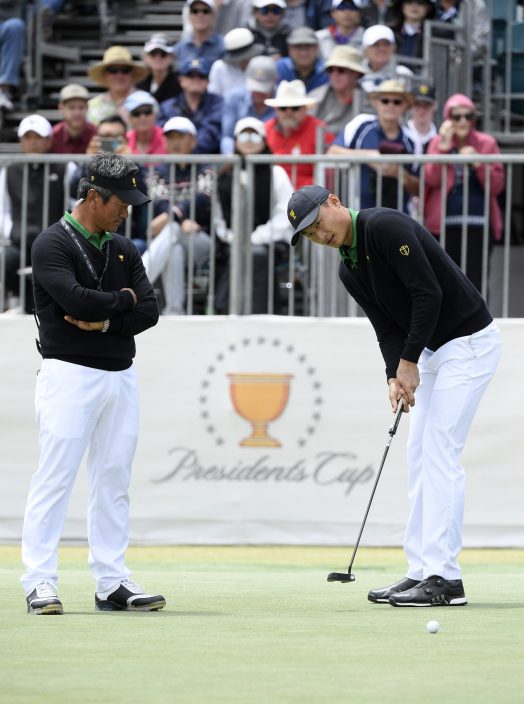 International Assistant captain K.J. Choi, left of South Korea and Haotong Li of China during a practice round ahead of the President's Cup Golf tournament in Melbourne, Wednesday, Dec. 11, 2019. (AP PhotoAndy Brownbill)

Dustin Johnson, who competes for the first time since Aug. 25 at the Tour Championship, has played with Matt Kuchar in various team events. This time he will have Presidents Cup newcomer Gary Woodland, giving the U.S. a big-hitting team on the short, fast track of Royal Melbourne. They will face Abraham Ancer and Louis Oosthuizen.

In the other matches, Xander Schauffele and Patrick Cantlay give the Americans an all-rookie team against Adam Hadwin and Sungjae Im, while Bryson DeChambeau and Tony Finau face Adam Scott and Byeong Hun An.

Woods opted to sit out Matt Kuchar and Rickie Fowler, the last addition to the U.S. team when Brooks Koepka had to withdraw with a knee injury. Els left out Li Haotong and Cameron Smith, one of three Aussies on the International team. 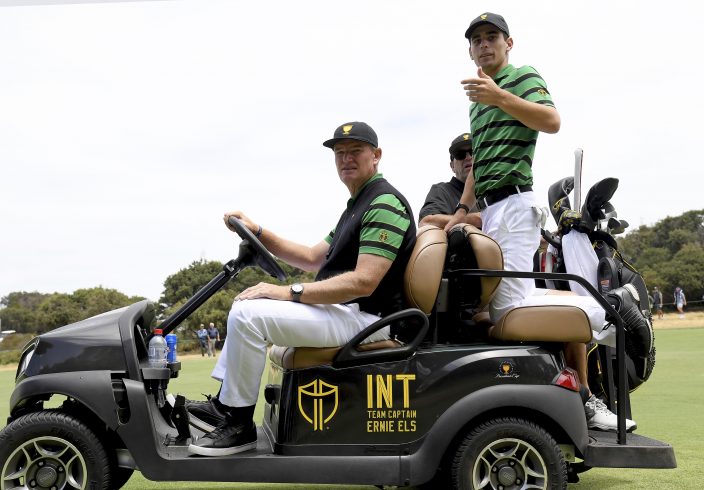 International team captain Ernie Els, left and Joaquin Niemann of Chile during a practice round ahead of the President's Cup Golf tournament in Melbourne, Wednesday, Dec. 11, 2019. (AP Photo Andy Brownbill)

Friday's second session features five foursomes matches, with four matches of each format on Saturday and 12 singles matches on Sunday.

Key for the International team is a strong start. The Americans have dominated this event, winning 10 out of 12 times and tying one event in South Africa. More telling of the one-sided nature of these matches is that the Americans have not trailed after any session since the second day in 2005.

“Whoever is out there, it's the most important match of the week for them,” Scott said. “We have to get off to a good start — as long as we can hang with them. Tomorrow is not super important, but our team doesn't need to be chasing its tail out here. We don't need to be mounting a huge comeback.”

Spotify tunes into pets with personalised playlists for ...

Lorry driver who pulled woman from burning car given br ...

Third embryo created in efforts to save northern white ...

Petersfield Bookshop inundated with orders after not se ...

China’s economic growth sank to a ...