Barring a nearly unfathomable about-face, Israel was headed Wednesday toward an unprecedented third election within a year — prolonging a political stalemate that has paralyzed the government and undermined many citizens' faith in the democratic process.

Both Prime Minister Benjamin Netanyahu and his chief challenger Benny Gantz have for weeks insisted they want to avoid another costly election campaign that is expected to produce similar results. But neither has been willing to compromise on their core demands for a power-sharing agreement. Netanyahu's recent indictment on corruption charges has added a murky legal imbroglio to the saga.

Following September elections, both men failed during their officially mandated time to form a governing coalition on their own. Then, in a final three-week window, they could not join forces to avoid another vote. 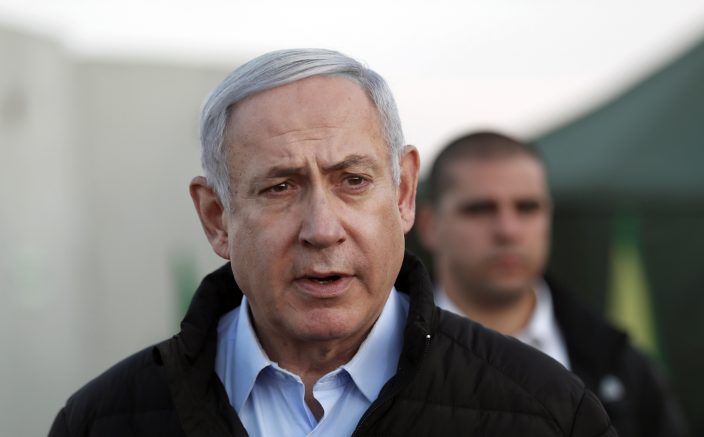 FILE - in this Nov. 24, 2019 file photo, Israeli Prime Minister Benjamin Netanyahu, looks on during a visit to Israeli army base in the Golan Heights located on the Israeli-Syrian border. Barring a nearly unfathomable about face, Israel is headed Wednesday, Dec. 11 toward an unprecedented third election within a year - prolonging a political stalemate that has paralyzed government and undermined its citizens' faith in the democratic process. (AP PhotoAtef Safadi, File)

Both sides said they were working until the last minute to find some way out of the deadlock. However, a breakthrough seemed highly unlikely.

With a midnight deadline looming Wednesday, both sides submitted legislation to dissolve parliament and schedule new elections on March 2. If the bill isn't passed by the deadline, new elections will automatically be triggered on March 10.

Given Israel's divided state, and the deep mistrust between the opposing camps, there is no guarantee that another vote will break the loop of elections and instability that has rocked the country for the past year. 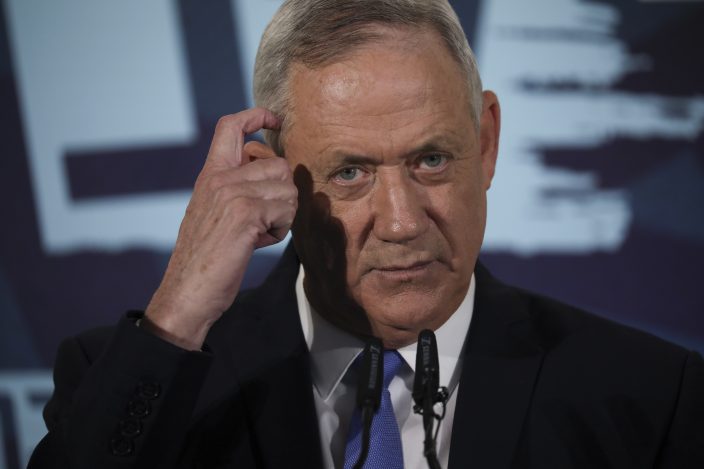 FILE - In this Nov. 20, 2019 file photo, Blue and White party leader Benny Gantz, addresses media in Tel Aviv, Israel. Barring a nearly unfathomable about face, Israel is headed Wednesday, Dec. 11 toward an unprecedented third election within a year - prolonging a political stalemate that has paralyzed government and undermined its citizens' faith in the democratic process. (AP PhotoOded Balilty, File)

Another campaign, and the national holiday of Election Day, will cost the Israeli economy billions.

But there will be an even steeper price caused by nearly 18 months of caretaker governments that cannot carry out major legislation, make appointments or pass budgets, said Yohanan Plesner, president of the non-partisan Israel Democracy Institute.

“The entire decision-making apparatus has been stalled and that has ample implications across the board,” he said. “Israelis are frustrated as a result of the fact that there is no decisive outcome. But there is also an understanding that we are in a very unique and unprecedented situation where a prime minister who is very popular within his own constituency is also being indicted with very severe crimes.”

The most straightforward way out of the stalemate would be for Gantz’s centrist Blue and White party to form a unity government with Netanyahu's Likud. Together, they control a solid majority in the 120-seat Knesset.

But Gantz's party refuses to sit with Netanyahu, who was indicted last month on charges of accepting bribes, fraud and breach of trust. Netanyahu, Israel's longest-ever serving leader, is desperately clinging to power to wage his legal battle from the favorable perch of prime minister. He has insisted on going first in any alternating leadership arrangement and has refused to drop his alliance with other nationalist and ultra-Orthodox Jewish parties.

Gantz has said he would make a deal with a different leader of Likud. But Netanyahu has so far managed to fend off a burgeoning insurrection inside his party, with just one major figure, Gideon Saar, daring to openly challenge him.

“If I am elected head of Likud, I will lead it to victory,” Saar announced Tuesday, citing polls that he was more likely to be able to build a stable coalition. “It is very clear, on the other hand, that if we keep the current course we will not get anywhere better than we have in the last two elections."

With all the other top Likud officials lining up behind him, Netanyahu is expected to beat Saar in any primary vote.

Netanyahu is not legally compelled to step down after being indicted, but Israeli law is fuzzy about whether he could be given authority to form a new government after the next election. Attorney General Avichai Mandelblit, who was harshly criticized by both sides throughout the lengthy process he took to press charges, will now be required to rule on that question as well before a likely court challenge.

Recent opinion polls have forecast a similar deadlock if new elections are held.

Hard-liner Avigdor Lieberman, a former Netanyahu ally, has emerged as a stubborn kingmaker, refusing to endorse either candidate while failing to coax them into a unity government.

The maverick politician, who takes a hard line against the Palestinians, has earned some newfound support in liberal circles by also taking a tough stand against ultra-Orthodox parties that hold great influence in Netanyahu's governments. But he's also taken lots of heat for the expended impasse.

“Voting for Lieberman is a sure path to a fourth election," wrote Matti Tuchfeld in the Israel Hayom daily. “Lieberman has turned into a one-man blocking majority. You can like him, agree with his opinions, you can love his zigzagging. No problem. But you have to know that a vote for him is a vote for continuing the political vacuum and a perpetual transition government.”

Hundreds of rebels surrender to Indian forces in peace ...

Israel's Netanyahu shores up base but obstacles remain