The eruption was so silent that Lillani Hopkins didn't hear it over the hum of the boat’s engines. She didn't turn around until her dad whacked her.

Then she saw it. Huge clouds of ash and steam shooting into the sky. She was so excited, she grabbed her phone out of her dad’s bag and hit record. But then the plume stopped going up and started rolling out over the cliffs — and her awe turned to fear.

Just under the surface of the crater, pressure had been building for months. Now the super-heated water, about 150 degrees Celsius, or 300 Fahrenheit, burst out in a powerful spray. The blast also contained ash, rocks and a few boulders the size of exercise balls, but it was likely the scalding water that was most deadly. 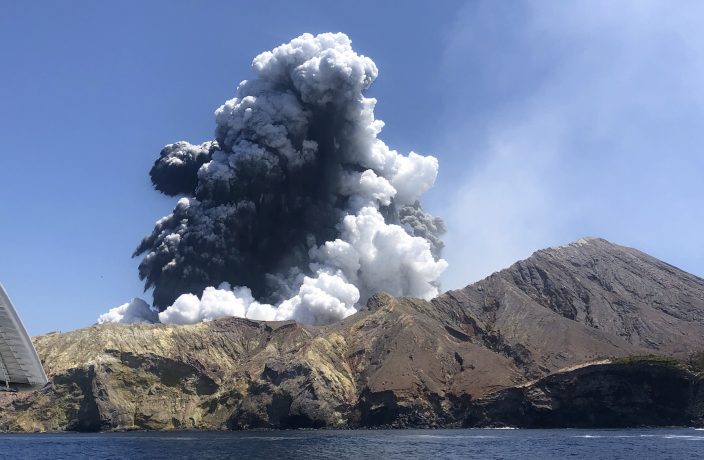 In this Monday, Dec. 9, 2019, photo provided by Lillani Hopkins, shows the eruption of the volcano on White Island off the coast of Whakatane, New Zealand. Lillani Hopkins was feeling seasick and keeping her eyes trained on the open water as her tour boat swung around for a last view of the White Island volcano on Monday afternoon, Dec 9, 2019. Suddenly people started gasping and then her dad whacked her, telling her to turn around. The eruption had been so silent she hadn't heard it over the noise of the boat's engines. (Lillani Hopkins via AP)

There were 47 tourists on New Zealand's White Island at the time of Monday's eruption: 24 from Australia, nine from the U.S., five New Zealanders and others from Germany, Britain, China and Malaysia. Many had taken a day trip from the Royal Caribbean cruise ship Ovation of the Seas. Authorities believe 14 people were killed. Those who survived the blast had terrible burns and some ran into the sea screaming — a screaming that would not stop.

Three weeks earlier, New Zealand’s seismic monitoring agency GeoNet had raised the alert level on the island from 1 to 2, on a scale where 5 is a major eruption. The agency had noted the water level in the crater lake had been rising since August and that over the previous few weeks there had been an increase in sulfur dioxide gas, which comes from magma deep in the volcano. Many people around the world have asked: How could the tours of the island continue in the face of such warning signs?

One answer may be that people in New Zealand are used to living on a giant seismic fault line that arcs around the Pacific Ocean. They ski on mountains that sometimes belch dark ash onto the snow, and take hikes past pools of boiling mud. They carry on working as minor earthquakes rattle cups from shelves. And they’ve toured White Island for decades, marveling as it steams and belches. 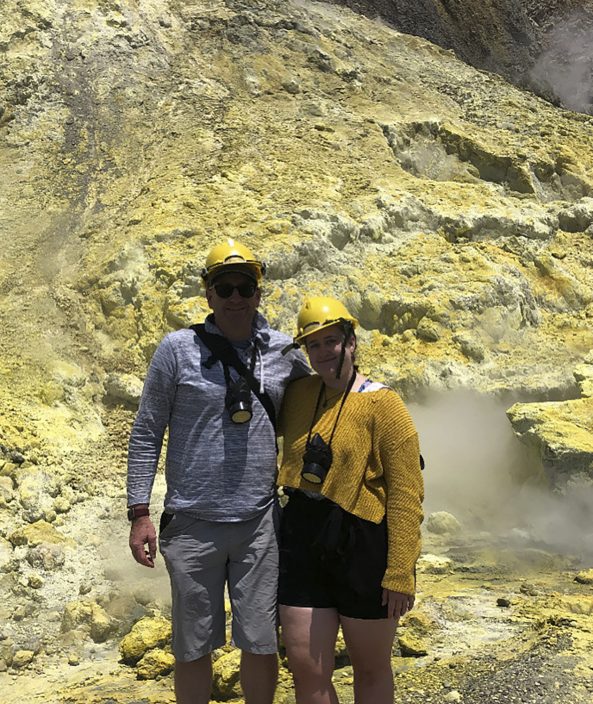 In this Monday, Dec. 9, 2019, photo provided by Lillani Hopkins, Lillani Hopkins pictured with her father Geoff prior to the eruption on White Island off the coast of Whakatane, New Zealand. Lillani Hopkins was feeling seasick and keeping her eyes trained on the open water as her tour boat swung around for a last view of the White Island volcano on Monday afternoon, Dec 9, 2019. Suddenly people started gasping and then her dad whacked her, telling her to turn around. The eruption had been so silent she hadn't heard it over the noise of the boat's engines. (Lillani Hopkins via AP)

The country’s tourism industry thrives on adventure spiced with a little danger. A 2 on the scale? White Island Tours, the island’s sole tour operator, decided to carry on. Company chairman Paul Quinn issued a statement Wednesday saying that while many questions remain, its priority for now is helping those affected.

Lillani, a 22-year-old student who has studied volcanoes, had taken her dad, Geoff, a pastor, to the island for a 50th birthday present on Monday. Their group’s two guides told them to wear hard hats. They gave them gas masks, which the guides said they could wear if they had trouble with their breathing.

The guides told them the sulfur dioxide and other gases on the island turn acidic when mixed with their saliva, and gave them candies to suck. Lillani has asthma and found she needed to wear the mask near the crater. Her dad noticed his throat getting sore.

As they walked around the island, Lillani was full of enthusiasm, and questions. She asked her guide: What do we do if it erupts? Strap on your mask and take shelter, he told her. Run to the shipping container that’s over there for emergencies, it’s full of supplies.

Aside from their two guides, Lillani and her dad were the only New Zealanders in their tour group. The others were from Asia, America, Europe. Some didn’t speak much English. Lillani loved every moment on the island, which is also known by the Maori name Whakaari.

After 90 minutes, the group got back on the boat, and was just a couple of football fields away from the shore when the volcano erupted. The crew told them to get below deck. Then they asked for people with medical training, and Lillani and her dad, who had both trained in first aid, joined two doctors on deck. A dinghy ferried the injured aboard, 23 in all.

Lillani had never seen anything like it. Welts and burns that covered every inch of exposed skin. People’s faces coated in gray paste, their eyes covered so they couldn’t see, their tongues thickened so they couldn’t talk. Some of them still screaming.

Passengers passed Lillani bottles of water. She rinsed out mouths, cleaned eyes and poured as much water on the burns as she could. The boat appeared to be filled with discarded gray rubber gloves. But they weren’t gloves, they were husks of skin that had peeled away from people’s bodies. Many were burned even under their clothes, and Lillani needed to cut them away.

As she poured water on some people’s burns, it only seemed to make them worse. So other passengers began handing her their clothes to make cold compresses, some of them stripping down to their bras and underpants.

Lillani talked to the injured, asked them questions about their vacations, trying to distract them and keep them conscious. She began singing her church songs. She stopped for a moment, embarrassed that she wasn’t much of singer. Somebody grabbed her leg: Please keep going.

The boat was flying, trying to make the hourlong trip back to shore as quickly as possible. Halfway back, the coast guard met them and two paramedics jumped aboard. They gave some of the injured medication, but others were so severely burned the paramedics couldn’t find their veins.

Many of the injured were asking about their loved ones. An elderly couple from Australia had become separated, the wife unable to move. So Lillani found the husband and led him by the hand back to her. He sat down and held her in his arms.

When they finally got back to shore, Lillani says all 23 of those she helped were still breathing. But she hasn’t had any contact with them since and doesn’t know if they all survived.

Thirty-nine people were taken from the island that day on Lillani’s boat and in helicopters. Five were already dead or died soon after. A sixth person who was being treated for burns at an Auckland hospital died on Tuesday night. Thirty others remain hospitalized, with 25 in critical condition. New Zealand’s burns units are working around the clock trying to keep those people alive, performing operations on them and skin grafts.

Lillani has just about finished her studies in geography and sociology at Waikato University and is looking forward to a career in teaching. She still loves volcanoes, she says, and being able to experience active ones is a privilege she hopes others will continue to be able to enjoy.

Locusts by the millions are nibbli ...

A national organization devoted to ...