Ernie Els wanted to inspire his International team at the Presidents Cup, and he found the one video that might do the trick.

Then again, there wasn't a lot to choose from.

Els is the lone person on this team, including his four assistants, who was at Royal Melbourne in 1998 for the only International victory. They took the lead after the opening session and never were challenged the rest of the way. At the time, it was the biggest loss an American team had ever endured. 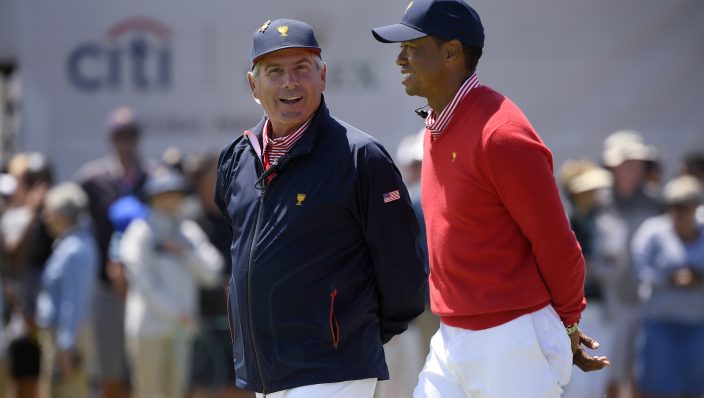 It sure looked that way.

Tiger Woods did his part, at least as a player. The first playing captain in 25 years, he opened with two birdies for a 2-up lead and finished with two more birdies as he and Justin Thomas won the opening fourballs match at Royal Melbourne. 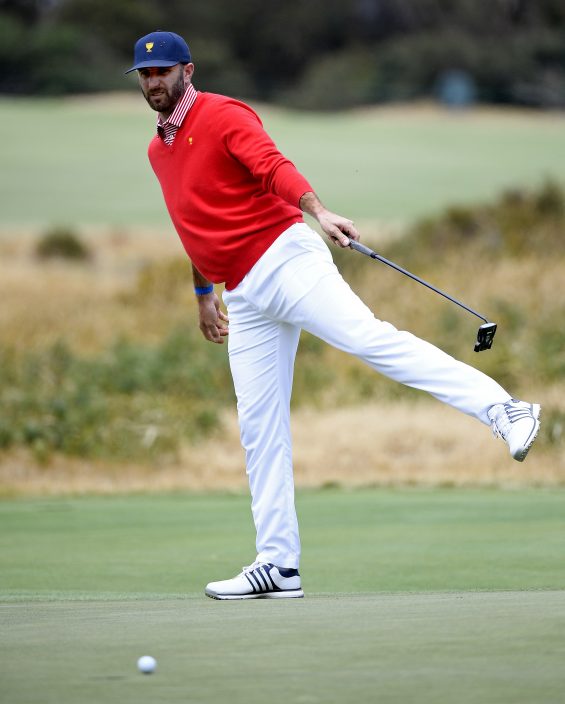 U.S. team player Dustin Johnson watches his putt on the 8th green during their fourball match at the Royal Melbourne Golf Club in the opening rounds of the President's Cup golf tournament in Melbourne, Thursday, Dec. 12, 2019. (AP PhotoAndy Brownbill)

And then he resumed his role as captain and watched the International team post one victory after another, hitting all the right shots in the two matches that went to the 18th hole.

When it was over, the International team had a 4-1 lead, its first time in front since 2005. 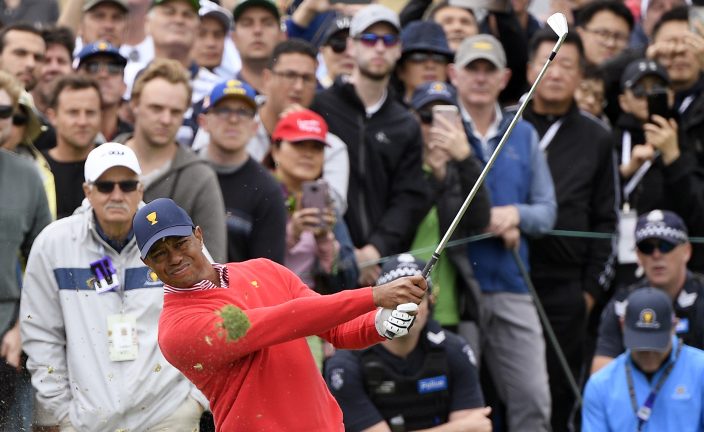 U.S. team player and captain Tiger Woods watches his sceond shot on the 7th hole as the turf flies up during their fourball match at the Royal Melbourne Golf Club in the opening rounds of the President's Cup golf tournament in Melbourne, Thursday, Dec. 12, 2019. (AP PhotoAndy Brownbill)

That was the extent of his optimism, as much as Els would allow himself. He already was looking ahead to the five matches of foursomes on Friday, an American strength while winning the last seven times. During that stretch, the Americans have outscored the International team 50.5 to 22.5 in foursomes.

At Royal Melbourne in 1998, the International had an 8-2 advantage in the alternate-shot format. 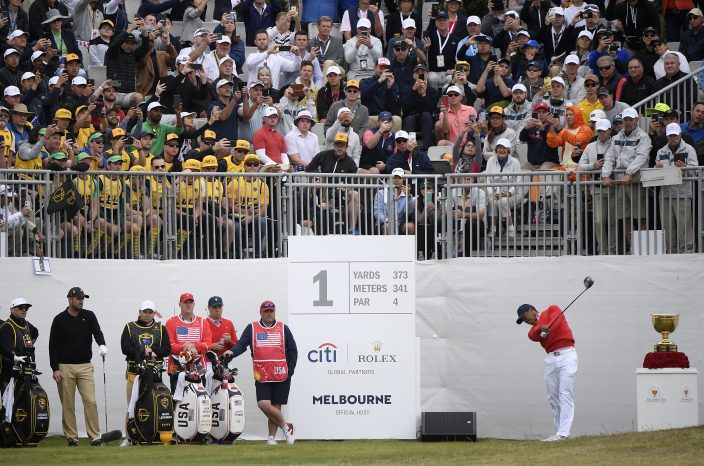 U.S. team player and captain Tiger Woods tees off during their fourball match of the opening rounds of the President's Cup Golf tournament in Melbourne, Thursday, Dec. 12, 2019. (AP PhotoAndy Brownbill)

On the first tee for the start Thursday was Craig Parry and Carlos Francos, two players from the 1998 team. All were invited to take part in these matches, a reminder of what can happen. Half of the team was able to make the long trip.

“It was great to see the guys in '98 giving us a bit of advice and how it felt for them starting the week back then, and what it feels like winning a Cup,” Louis Oosthuizen said. “We have a few boys of '98 in the team room, as well, and I think we are in a really good place. But we are set on what we want to do. We have a massive goal.”

And the International team still has a long way to go.

Els stuck to his plan, which is geared around analytics. Even a resounding start was not enough to tempt the International captain to keep partnerships that were so successful in the opening session. He broke them all up, just like he planned.

Abraham Ancer and Oosthuizen birdied the opening five holes for a 4-up lead that Dustin Johnson and Gary Woodland could not overcome in a 4-and-3 victory. Adam Scott and Byeong Hun An — the replacement for Jason Day — never trailed in beating Tony Finau and Bryson DeChambeau. Hideki Matsuyama delivered the clutch putt from 25 feet on the 17th hole as he and C.T. Pan beat Patrick Reed and Webb Simpson, 1 up.

Scott will have Oosthuizen for foursomes. Ancer will play with Marc Leishman. Matsuyama plays with An.

“We've gone this route, and we keep going.” Els said. “The guys played well today in their respective pairings, and tomorrow we've got whatever pairings we have. We'll feel comfortable with them.”

There is a quiet confidence, much like International captain Peter Thomson had in 1998.

Woods appeared to make one change. He is playing again with Thomas, and he might have been subject to criticism if he didn't. He was the best American at Royal Melbourne. Woods was asked if his performance dictated his Friday lineup, if he would have stuck to being the captain if the team had fared better.

“We had a couple of different options rolling into this entire Cup,” Woods said. “The guys have known the game plan, different possible options. And this is one of the scenarios.”

Woods kept together two other teams, even in defeat — Reed and Simpson, Patrick Cantlay and Xander Schauffele.

Some of his players were not even in high school the last time the Americans trailed, and Woods was not about to worry about one day.

“Just because we lost the session doesn't mean the Cup's over,” Woods said. “There's a long way to go. A lot of points available. The guys will regroup and we'll come out tomorrow ready to go.”

“Keep the jets down,” Els said. “There's a long way to go. Don't get too excited. This is a strong team, and they're going to come back strong.”