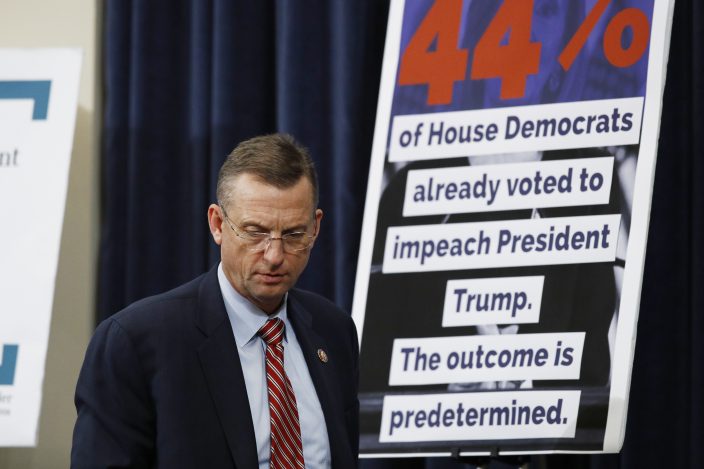 PAKISTAN-A TRAFFICKED BRIDE’S DEATH — The suspicious death of a Pakistani woman adds to growing evidence of mistreatment and abuses inflicted on hundreds of women and girls from the country who have been trafficked to China as brides. Samiya David was sold by her family to a Chinese groom and spent two months in China. When she returned, the once robust woman was malnourished, too weak to walk, her speech confused and disjointed. She died soon after. Her family says she told them never to ask her about what happened there. By Kathy Gannon. SENT: 1,390 words, photos. 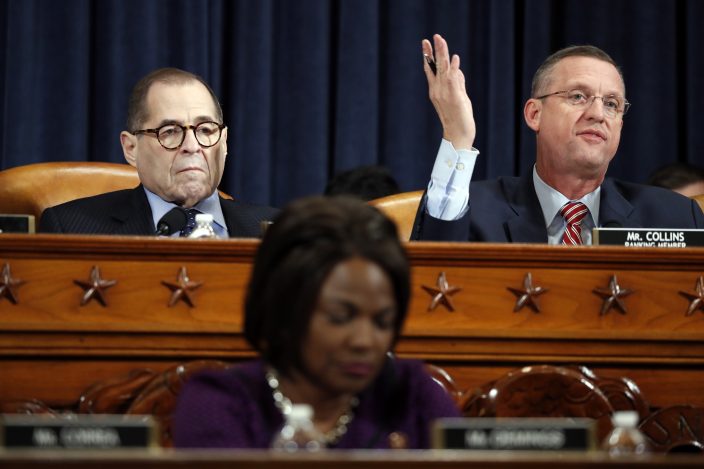 BRITAIN-BREXIT-ELECTION — U.K. voters are deciding who they want to resolve the stalemate over Brexit in a parliamentary election seen as one of the most important since the end of World War II. Voting is underway across the country in a contest that pits Prime Minister Boris Johnson, who says he will take Britain out of the European Union by Jan. 31, against opposition leader Jeremy Corbyn, who promises another referendum on Brexit. By Danica Kirka and Jill Lawless. SENT: 1,060 words, photos. With BRITAIN-BREXIT-ELECTION-WHAT'S NEXT; BRITAIN-BREXIT-ELECTION-PARTIES. For full coverage: https://apnews.com/Brexit. 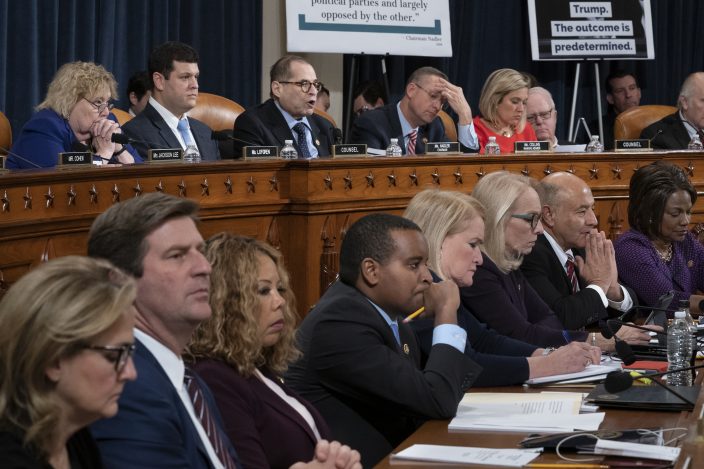 House Judiciary Committee Chairman Jerrold Nadler, D-N.Y., top center, and Rep. Doug Collins, R-Ga., the ranking member, right, makes his opening statement during a markup of the articles of impeachment against President Donald Trump, on Capitol Hill in Washington, Wednesday, Dec. 11, 2019. The Democratic members of the panel are on the bottom row. (AP PhotoJ. Scott Applewhite)

TRUMP-IMPEACHMENT — The House Judiciary Committee continues a marathon two-day session to consider the historic articles of impeachment against President Donald Trump. Democrats are describing a strong sense of duty to hold the president in check, while Republicans are decrying the process and what it means for the future of the country. By Mary Clare Jalonick and Lisa Mascaro. SENT: 770 words, photos, video. UPCOMING: 990 words after hearing resumes at 9 a.m. With TRUMP-IMPEACHMENT-WHAT TO WATCH. Also see MORE ON IMPEACHMENT below. For full coverage of the impeachment inquiry in AP Newsroom: https://newsroom.ap.org/page/impeachment

NEW ZEALAND-VOLCANO ERUPTS — A team of eight New Zealand military specialists will land on a small volcanic island just after first light Friday to attempt to retrieve the bodies of eight victims of an eruption that claimed eight other lives. New Zealand police say the recovery attempt will go ahead even though scientists believe another eruption is possible on White Island. By Nick Perry. SENT: 620 words, photos.

SHOOTING-JERSEY CITY — Fears that a deadly shooting at a Jewish market in Jersey City was an anti-Semitic attack mounts as authorities recount how a man and woman deliberately pulled up to the place in a stolen rental van with at least one rifle and got out firing. By David Porter and Jim Mustian. SENT: 1,210 words, photos, videos. With SHOOTING-JERSEY CITY-TIMELINE. 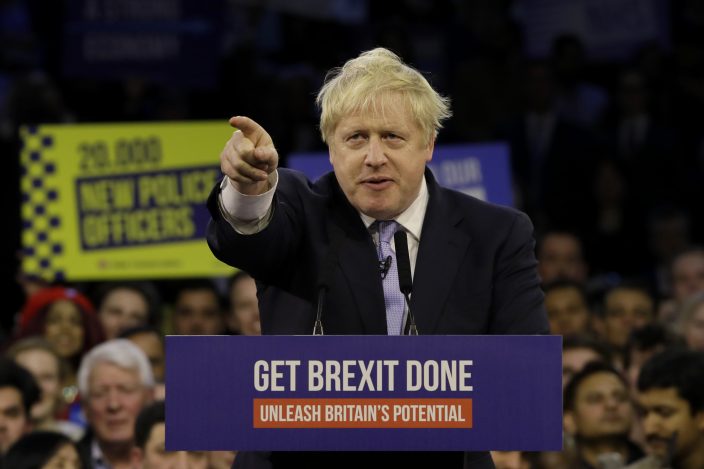 CENSUS HARD TO COUNT — An Associated Press analysis finds that Detroit tops the list of cities that will be hardest to count in the 2020 census. The Motor City has tens of thousands of vacant houses, sparse internet access and high poverty — all factors that will present obstacles for an accurate tally. Other Rust Belt towns that have lost population and Sun Belt cities with large numbers of immigrants and transplants will pose similar challenges. The national headcount determines how federal money is spent and how many seats states get in Congress. By Corey Williams, Mike Schneider and Angeliki Kastanis. SENT: 1,240 words, photos, video.

CHILDBIRTH-OUTDATED PRACTICES — Outdated medical practices related to childbirth that continue to be used despite evidence they cause harm have come under increasing scrutiny in Europe. The complaints include inadequate anesthesia, surgical incisions during vaginal births and failure to seek patient consent for certain procedures. Doctors and advocates say that depending on the act, these practices rise to the level of human rights violations. By Medical Writer Maria Cheng. SENT: 1,310 words, photo, video. 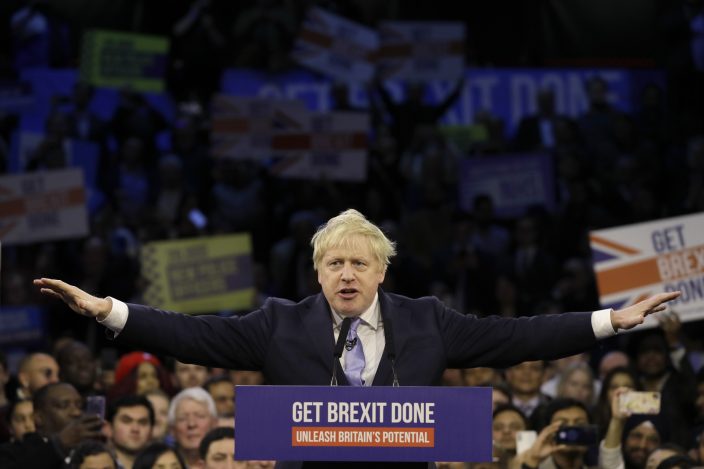 TRUMP-SCHIFF’S RIFF-FACT CHECK — Trump is a master at putting words in the mouths of other people. It's one of his favorite forms of mockery and self-aggrandizement. He does not like it when a Democrat — in this case, Rep. Adam Schiff — does the same, at his expense. SENT: 1,290 words, photos. 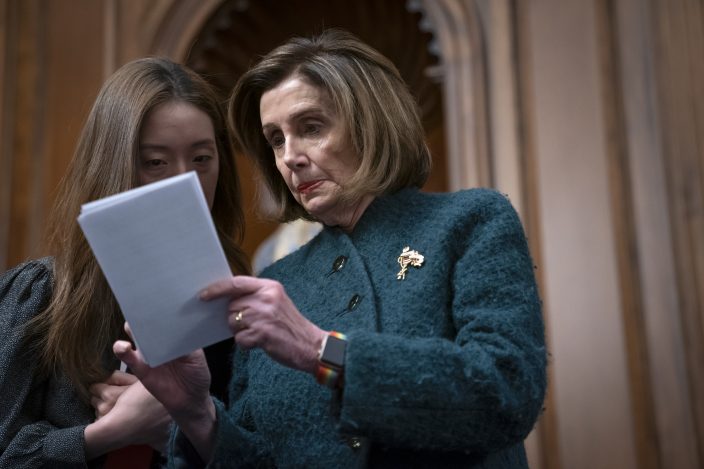 Speaker of the House Nancy Pelosi, D-Calif., reads a note handed to her from an aide as she attends a health care event at the Capitol in Washington, Wednesday, Dec. 11, 2019. (AP PhotoJ. Scott Applewhite) 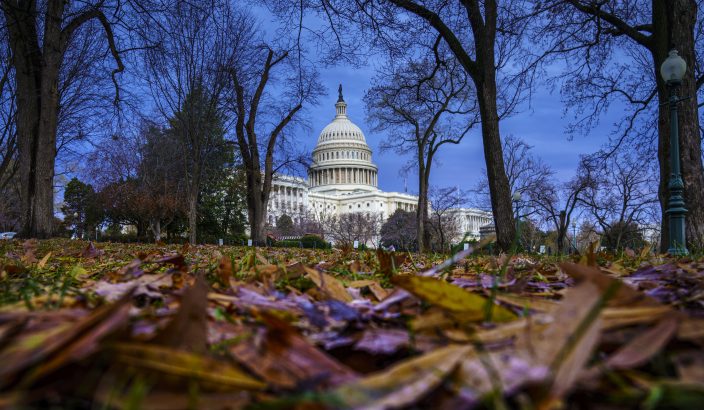 The Capitol is seen in Washington, early Wednesday, Dec. 11, 2019. Voting on two articles of impeachment against President Trump is expected in a matter of days by the Judiciary Committee and by Christmas in the full House. (AP PhotoJ. Scott Applewhite)

PELOSI-MEDICARE DRUGS — Candidate Donald Trump said he could save Medicare billions by negotiating prescription drug prices. The House will vote on a bill by Speaker Nancy Pelosi that would deliver that and much more, but Trump is not on board. SENT: 660 words, photo. UPCOMING: 990 words after House vote, time uncertain.

WILD-HORSES-CONGRESS — Two House committee chairmen are trying to put the brakes on money for a new Trump administration proposal to accelerate the capture of 130,000 wild horses across the West over the next 10 years. SENT: 590 words, photo.

ISRAEL-POLITICS — Israelis are grappling with the confounding reality of unprecedented third national elections in less than a year, after Parliament was dissolved and the date for the next vote was set — further extending months of political paralysis that has gripped the country. SENT: 660 words, photos.

GERMANY-NAZI-APOLOGY — One of Germany’s richest families, which owns Krispy Kreme Doughnuts, Pret A Manger and other international brands, is giving millions to support Holocaust survivors as it seeks to atone for its use of forced laborers during the Nazi era and its enthusiastic support of Adolf Hitler, the AP has learned. By David Rising. SENT: 900 words, photos.

TEXAS-GIRL-LIFE-SUPPORT — A judge will consider whether a Texas hospital can take a 10-month-old girl off life support despite her family's opposition. SENT: 470 words. UPCOMING: Hearing at 10 a.m.

VAPING FLAVORS — New York's ban on flavored e-cigarettes is still held up in court but the state may try to keep it alive and expand it to include menthol. SENT: 520 words.

PRESIDENTS CUP — Tiger Woods has a great day in his return to the Presidents Cup as a player. By Golf Writer Doug Ferguson. SENT: 980 words, photos.