Candidate Donald Trump said he could save Medicare billions by negotiating prescription drug prices. Thursday the House will vote on a bill by Speaker Nancy Pelosi that would deliver that and much more.

But Trump is not on board.

The California Democrat's legislation is expected to pass the House, but the White House has laid down a veto threat. And Senate Republicans declare they'll ignore Pelosi's bill because government shouldn't negotiate drug prices. 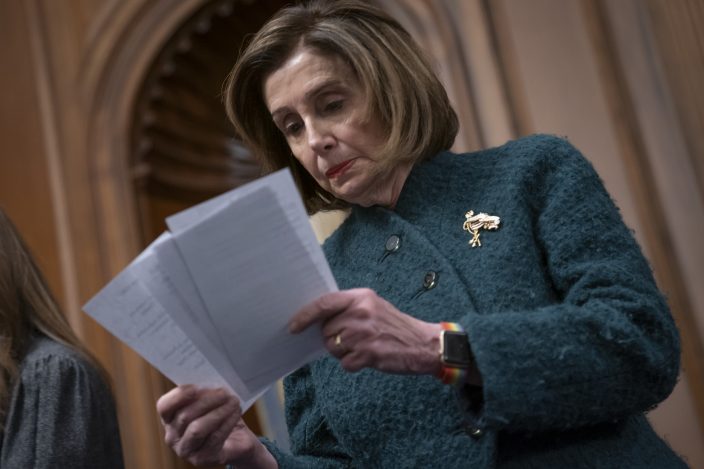 Speaker of the House Nancy Pelosi, D-Calif., reads a note handed to her from an aide as she attends a health care event at the Capitol in Washington, Wednesday, Dec. 11, 2019. (AP PhotoJ. Scott Applewhite)

That's not stopping Democrats from savoring the moment. They contend Trump's disapproval shows a lack of conviction behind some of his populist pitches.

And they're betting Pelosi's plan will prove popular with 2020 voters, helping elect Democrats who will eventually pass something like it. The bill would cap drug copays and deductibles at $2,000 a year for Medicare recipients. And it would use about $360 billion of its projected 10-year savings from lower drug costs to create new Medicare coverage for dental care, hearing, and vision — filling major gaps for seniors.

“I've watched the president over the last couple of years and I think he goes back and forth," said Rep. Frank Pallone, D-N.J., who as chairman of the Energy and Commerce Committee helped write the legislation. “We're hopeful he will come back.”

Republicans are rolling their eyes.

Texas Rep. Kevin Brady, the ranking Republican on the Ways and Means Committee, says the bill has “zero chance” of becoming law. “Its consideration this week adds weight to a very unproductive year in Congress,” Brady said.

The pharmaceutical industry is strongly opposed to the bill, but groups including the AARP are supporting it.

A major concern about the legislation is that it will result in fewer drugs coming to market. But there's debate about the extent. The nonpartisan Congressional Budget Office estimates about 3% to 10% fewer new drugs, while the White House Council of Economic Advisers says it could be much higher, up to one-third of new medications.

“Any drug that’s out there, we’re going to have access to,” said Scott. “The U.S. would still be the biggest market.”

Although high prescription drug prices consistently register in polls as the public's top health care concern, it's unclear in a capital divided over Trump's impeachment that any major legislation will pass before next year's elections.

There's a bipartisan Senate bill that would also cap seniors' out-of-pocket costs — at $3,100 a year— and require drugmakers to pay Medicare rebates if they hike prices above inflation. It has Trump's support but Senate Majority Leader Mitch McConnell, R-Ky., hasn't said if or when he'll bring it to the floor.

Inflation rebates are included in Pelosi's bill as well, so there is considerable overlap between the two major pieces of legislation before lawmakers. But Pelosi goes further with several unique features, including:

— Medicare would be authorized to negotiate prices for costly medications, using a formula based on lower prices paid in other economically advanced countries.

— Drugmakers who refuse to negotiate would be hit with steep sales taxes for the medication at issue. Republicans say proposed taxes as high as 95% are unconstitutional. The budget office projects that most pharmaceutical companies would opt to accept lower prices from Medicare.

Democrats have named the drug legislation after the late Rep. Elijah Cummings, D-Md., who early on sought to open a discussion with Trump on drug prices. Cummings as oversight committee chairman was a target of Trump outbursts on Twitter.

The Taal volcano near the Philippi ...

Draft Pelosi plan would overhaul how Medicare pays for drugs