Elizabeth Warren’s signature “wealth tax” would bring in at least $1 billion less in new government revenue than the Democratic presidential candidate estimates while ultimately shrinking the economy over the next 30 years, according to a new academic analysis.

The Massachusetts senator wants a 2% tax on fortunes worth $50 million-plus and a levy three times that on anyone who has a net worth of more than $1 billion. She has pledged to use those to dramatically remake government, offering universal child care and free tuition at public universities while wiping out most student debt for 42 million Americans and helping to finance a “Medicare for All" plan providing government-sponsored health care nationwide.

But the piggy bank that Warren wants to use to accomplish her sweeping policy promises won’t be nearly as flush with cash as she believes, the University of Pennsylvania's Penn Wharton Budget Model, which provides nonpartisan analysis of public policy proposals, found Thursday. Warren's campaign pushed back, saying the analysis was of a “different and worse" plan than what the senator is proposing. 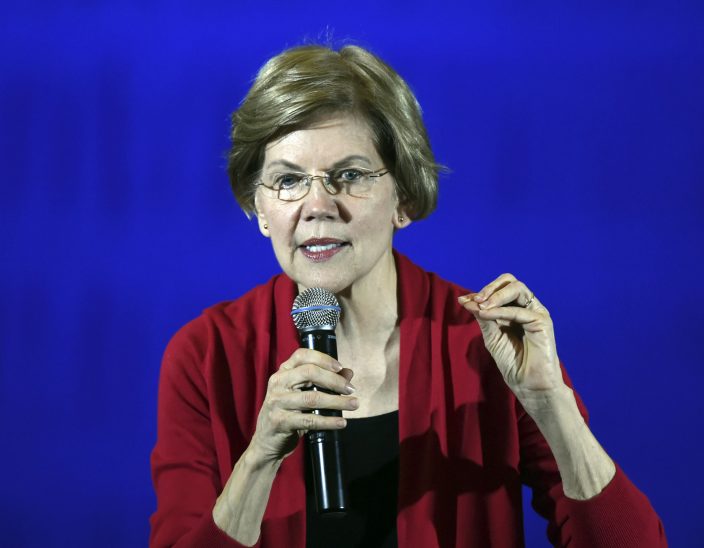 Sen. Elizabeth Warren, D-Mass., pushed back at fellow Democrats who advocate a more moderate path to the White House during a speech at Truckee Meadow Community College, Tuesday, Dec. 10, 2019, in Reno, Nev. She said her party will lose the 2020 presidential election if it settles for a "business as usual" agenda that "only nibbles around the edges." (Andy BarronThe Reno Gazette-Journal via AP)

The Penn model says the proposed wealth tax will raise between $2.3 trillion and $2.7 trillion over 10 years, or as much as $1.4 trillion less than Warren’s campaign estimates. It also concludes that the new taxes would cause the economy to contract between 0.9% and 2.1% by 2050 — depending on how the new revenue is spent.

The model says the new tax would reduce “private capital formation” enough to drive the U.S. economy’s average wage down between 0.9% and 2.3%, even affecting households not rich enough to qualify for the tax.

The findings are important because Warren’s proposal has been among the most popular — and most scrutinized —of her campaign. It's given the senator an economic populist edge that helped vault her among the Democratic primary’s front-runners. The race's other top progressive candidate, Sen. Bernie Sanders of Vermont, has proposed an even higher tax on top fortunes — but it's such a part of Warren rallies that her crowds often break into chants of “2 cents!” in a rallying cry for her wealth tax.

The model's findings could provide new lines of attack for some of Warren’s more moderate White House hopeful rivals. That includes South Bend, Indiana, Mayor Pete Buttigieg and former Vice President Joe Biden, who has accused Warren of basing her policy agenda on economics that don’t add up and argued that she and Sanders have demonized wealth.

Warren is in New Hampshire on Thursday to deliver an economic speech that her campaign says will address “how corruption has fueled the economic challenges facing working families.” She has for months shrugged off criticism from some in the business community who worry about her wealth tax hurting financial markets and other economic indicators, even selling mugs labeled “Billionaire Tears" on her campaign website.

“This analysis does not study Elizabeth’s actual plans — it does not account for the strong anti-evasion measures in her wealth tax and does not even attempt to analyze the specific investments Elizabeth is committed to making with the wealth tax revenue," Warren campaign spokeswoman Saloni Sharma said Thursday. “This is an analysis of a different and worse plan than Elizabeth’s, using unsupportable assumptions about how the economy works, and its conclusions are meaningless."

Warren's wealth taxes have prompted past skepticism from other economists. Those haven't hurt the enthusiasm for it at Warren's rallies, though.

The University of Pennsylvania also has, according to a 2017 Forbes analysis, produced 17 billionaires, the most of any university in the nation. That includes President Donald Trump and Tesla CEO Elon Musk.

Warren's new bankruptcy plan may spark a clash with Biden

Warren, back in Oklahoma, sees tribal leaders in private

Warren says she won’t immediately push for Medicare for All

Still unknown? Many have yet to form opinions on Warren