Prime Minister Boris Johnson has won the majority he needs to push through Brexit, but he faces another big challenge from Scotland, where the independence-minded Scottish National Party and its leader Nicola Sturgeon have surged to a commanding position. Here is a look at the factors that will make this a vexing issue for Johnson.

WHO IS NICOLA STURGEON AND WHAT IS HER ROLE IN SCOTTISH POLITICS?

The dynamic Sturgeon, 49, is leader of the Scottish National Party, which dominates the political scene, and as such she is Scotland’s first minister. She took over the party's top post in 2014 after it lost a hard-fought referendum on independence from the United Kingdom. Sturgeon has emerged as one of the most talented figures on Britain’s fractious political scene. 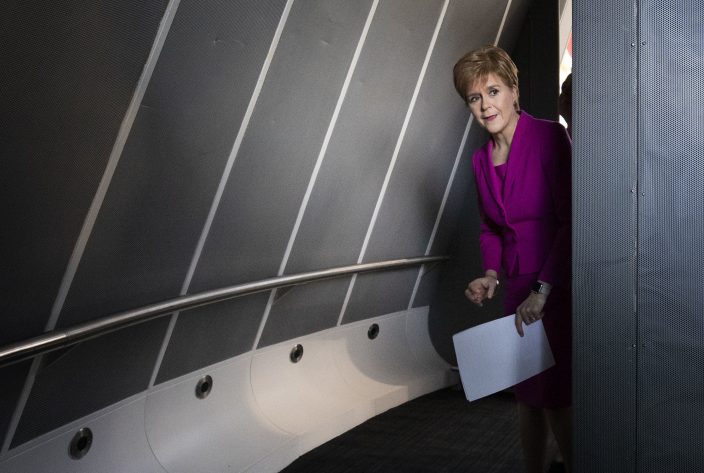 Scottish First Minister Nicola Sturgeon arrives to make a speech in Edinburgh, Scotland, Friday Dec. 13, 2019. Prime Minister Boris Johnson has led his Conservative Party to a landslide victory in Britain’s election that was dominated by Brexit. (Jane BarlowPA via AP)

The daughter of an electrician and a dental nurse, she became a lawyer after training at the University of Glasgow and has earned a reputation for being well-prepared, witty and at ease with voters, and blunt when she needs to be.

Independence for Scotland has long been her primary political goal. Opponents say they wish she would sometimes talk about other objectives, but her party’s surge in Thursday's election suggests her popularity remains high. On her day of triumph, she chose to directly challenge Johnson and the British establishment by saying she would push hard, starting next week, for another referendum.

WHAT IS THE LOOMING CONFRONTATION ABOUT? 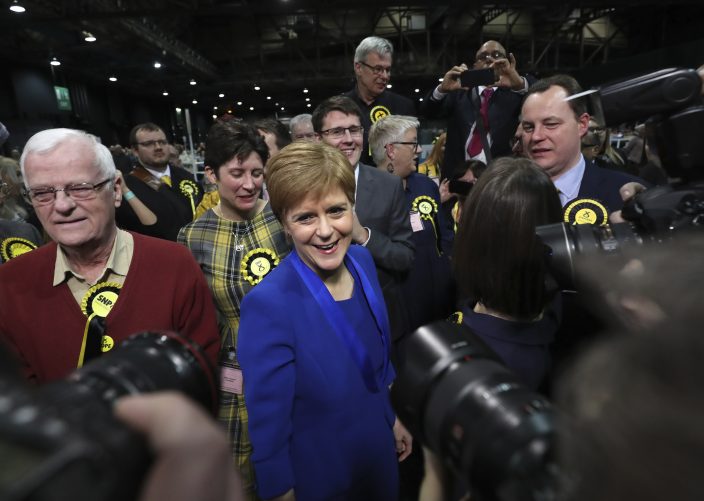 Scottish First Minister Nicola Sturgeon smiles as she arrives at the SEC Centre in Glasgow for the declaration in her constituency in the 2019 general election, Friday Dec. 13, 2019. An exit poll in Britain's election projects that Prime Minister Boris Johnson's Conservative Party likely will win a majority of seats in Parliament. That outcome would allow Johnson to fulfil his plan to take the U.K. out of the European Union next month. (AP PhotoScott Heppell)

Sturgeon and her party are dead set on holding a referendum on Scottish independence, despite firm opposition from Johnson, who says his government would not authorize a vote on the matter.

A Scottish breakaway would thrust a dagger into the heart of the United Kingdom, creating a crisis that Johnson is determined to avoid as he tries to manage the difficult Brexit process that is his main focus.

The British establishment thought it had put the matter to rest when a “once-in-a-generation” referendum in 2014 turned thumbs down on Scottish independence by a 10-point margin. But it has surfaced again, in part because of issues raised by the 2016 Brexit referendum and in part by the SNP’s strong showing on Thursday.

WHY IS STURGEON PUSHING SO HARD RIGHT NOW?

Sturgeon says things have changed since the first independence vote, primarily because Britain voted in 2016 to leave the European Union over the objections of Scottish voters, who expressed a clear desire to remain part of the prosperous trading bloc.

She says Scotland is being dragged out of the EU against its will — and won’t stand for it.

There is no question her standing was boosted by the party's performance in the general election. It gained 13 seats and now holds 48 of the 59 Scotland-based seats in the British Parliament. Johnson's Conservative Party, victorious elsewhere but vanquished in Scotland, holds just six.

Sturgeon threw down the gauntlet Friday, saying she is demanding, not requesting, a referendum.

“This is not about asking Boris Johnson or any other Westminster politician for permission. It is instead an assertion of the democratic right of the people of Scotland to determine their future,” she said, promising to begin next week the formal process of setting up a recognized referendum.

She did not shy away from confronting Johnson. Saying she wanted to speak directly to the prime minister, she looked at the TV camera and said: “You as the leader of a defeated party in Scotland have no right to stand in the way” of a second vote on independence.

Despite Sturgeon's confrontational stance, it is not clear that Scottish voters’ desire to break away from the United Kingdom has increased since the 2014 vote. The vote then was 55% to 45% against independence — and the SNP's share of the popular vote in Scotland in Thursday's election was also at 45%.

HOW DID THE 2014 REFERENDUM TAKE PLACE?

The British Parliament gave its formal approval to the 2014 vote and it was binding, meaning that Scotland would have been able to become an independent country if a majority of voters had backed the measure. Parliament acted after Scottish and UK ministers signed an agreement. The Scottish Parliament also gave its approval for the vote.

Some independence backers have called for Scotland to hold a referendum without British approval if Johnson’s government sticks to its position and refuses to OK another vote, but Sturgeon has always declined to back this approach. It’s not known if her position on that will change as the confrontation with Johnson unfolds.

Italy's Salvini dares lawmakers to vote to put him ...

Paris commuters who were careworn ...