The head of Lebanon's militant Hezbollah group said Friday the best emergency government to deal with the country's worsening economic crisis is one that includes all political groups.

Hassan Nasrallah's comments indicated there was no resolution yet on who should head an emergency government, two months after Prime Minister Saad Hariri resigned Oct 29.

Protests erupted Oct. 17 over proposed new taxes and spiraled into calls for the entire political elite to step down. The protesters have also said they won't accept Hariri as returning prime minister. 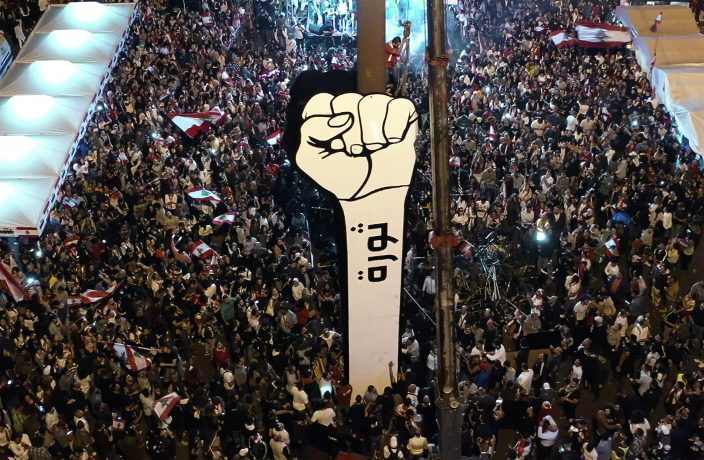 In this photo from a drone, anti-government protesters re-install a new large cardboard fist labelled "Revolution" in Martyr's Square after a previous one was burned down overnight by unknown vandals, at the Martyr square, in downtown Beirut, Lebanon, Friday, Nov. 22, 2019. Lebanon's protesters and top politicians held competing Independence Day celebrations Friday, reflecting the deepening rift that has beset the country grappling with its worst political and economic crises in decades. (AP PhotoHussein Malla)

Consultations between President Michel Aoun and parliamentary blocs to name a new premier were expected Monday. They were postponed once before over disagreements on naming a new premier.

Nasrallah's comments were also a rejection of a proposition put forward by political ally Gebran Bassil, who called for a government made up of experts and said he won't take part in one headed by Hariri. Bassil said Thursday a government picked by Hariri, according to his conditions, would be destined to fail.

Hariri had said he wants a government without political groups, made up of technocrats alone. 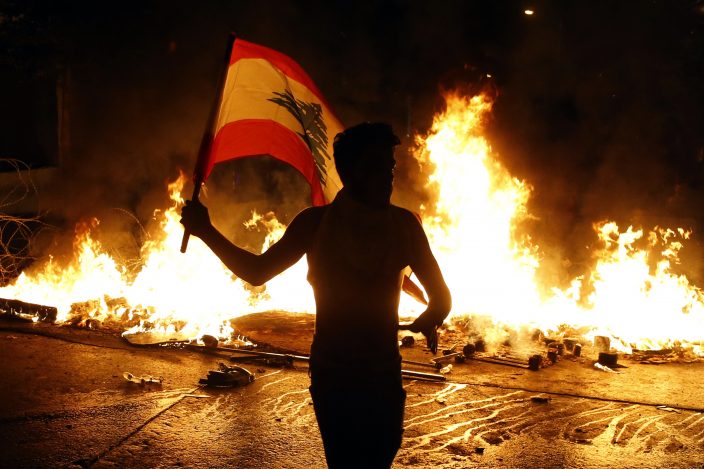 An anti-government protester waves a Lebanese flag in front of a barricade on fire on a road leading to the parliament building, during ongoing protests against the government, in Beirut, Lebanon, Wednesday, Nov. 13, 2019. Lebanese protesters said they will remain in the streets despite the president's appeal for them to go home. (AP PhotoBilal Hussein)

“The patriotic duty calls for everyone to take responsibility, to take part and for all to offer concessions,” Nasrallah said in an 70-minute speech in which he characterized the situation in Lebanon as dire. “How can a government from one group deal with a crisis of this nature?”

He said any “salvation government would have to take unpopular measures,” and can't afford to engage in disagreements with other political parties.

Nasrallah said Hezbollah had supported a coalition government headed by Hariri, but said the resigned prime minister laid down conditions his group found “inappropriate and some of them were exclusionary.” He didn't elaborate but urged him to give up some of his conditions. 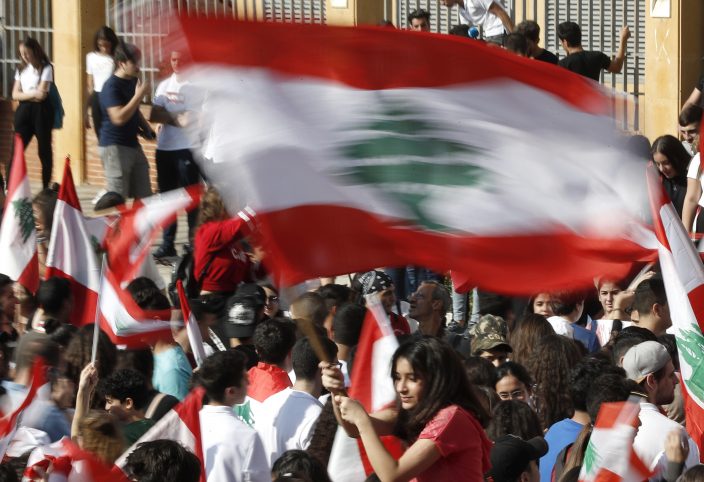 A student protester waves her national flag during protest against the government in front of the education ministry in Beirut, Lebanon, Friday, Nov. 8, 2019. Lebanese protesters are rallying outside state institutions and ministries to keep up the pressure on officials to form a new government to deal with the country's economic crisis. (AP PhotoHussein Malla)

Nasrallah said Hezbollah is ready to support a consensus candidate for the premier post, but only as part of a coalition government that represents everyone.

Hezbollah and its political allies dominate the current caretaker government.

Lebanon has been grappling with nationwide protests and faces one of its worst economic crisis in decades, only deepened by the political stalemate.

Under Lebanon's sectarian-based political system, the prime minister is chosen from the Sunni community.

Hariri, backed by the West but who entered into a national unity government dominated by Hezbollah, called for a government of technocrats after he resigned Oct. 29.

An international group of Lebanon’s allies said the country cannot expect to receive aid unless a new government is formed to institute major reforms.

The Los Angeles Clippers were miss ...