A 13-year-old boy has been arrested in the fatal stabbing of a Barnard College student in a park near the school’s New York City campus, two law enforcement officials with knowledge of the investigation said Friday.

The boy was charged with murder in the slaying of 18-year-old freshman Tessa Majors and is expected to be tried as a juvenile delinquent in family court, said the people, who were not authorized to speak publicly about the case and did so on condition of anonymity.

As many as three attackers were involved, police have said, and the president of Barnard College said Majors was stabbed during an armed robbery. Authorities on Thursday questioned two people who were later released, police said. 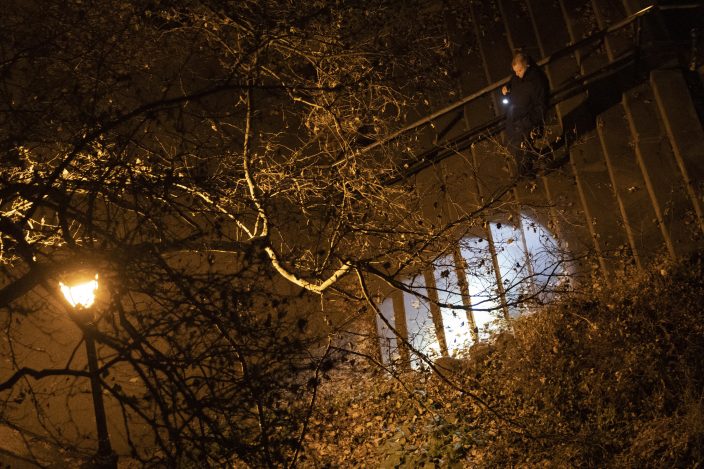 A New York City police department detective use a flashlight to look for evidence in Morningside Park, Thursday, Dec. 12, 2019, in the Upper West Side of Manhattan. Tessa Majors, a 18-year-old Barnard College freshman from Virginia, was fatally stabbed in the park near the school's campus in New York City. (AP PhotoMary Altaffer)

New York police spokesman Andrew Lava declined comment on the arrest of the boy but Police Commissioner Dermot Shea tweeted later that detectives “are making significant progress, and we will have major updates to announce very soon.”

Majors, from Charlottesville, Virginia, played in a rock band in New York and had told an editor from a newspaper internship in high school that she planned to take journalism classes in college.

Flowers and candles were left at a makeshift campus memorial and her family said in a statement Friday that they “are devastated by the senseless loss of our beautiful and talented Tess."

Majors was walking in Manhattan’s Morningside Park just before 7 p.m. Wednesday when she was accosted and stabbed during a struggle, Chief of Detectives Rodney Harrison said.

She staggered up a stairway to a nearby street, where she was spotted by a campus security guard who called 911, Harrison said. Majors died at a hospital.

Investigators recovered a knife Thursday but were not certain whether it was connected to Majors’ death. Police have since increased patrols around the park and campus, which is part of the Ivy League’s Columbia University.

The 13-year-old suspect in Majors' death is charged with murder in the course of another crime, in this case the alleged robbery, the people with knowledge of the investigation said.

Under state law, he can only be tried as an adult if he is charged with intentional murder.

Juveniles convicted in New York state's family courts can be sent to detention facilities until they are 21 in many cases, and are often released after that.

Majors was killed just as the semester at all-women's Barnard College was winding down, with final exams set to begin Friday followed by a month break.

She sang and played bass guitar in the rock band Patient 0. In October, debuting in New York and writing on Instagram: “Safe to say the first NYC show went well ;)”

Her Instagram account also offered glimpses into Majors' personality and her move from Virginia to the big city. In one post in late August, she wrote about leaving home: “Peace out to the 'ville.” In the next, she was hamming it up at Barnard: “College more like coollege."

Majors graduated high school in May from the private St. Anne's-Belfield School in Charlottesville, where Head of School David Lourie said she was "a shining light in our community, a good friend, respected classmate, trusted teammate, and creative and passionate musician.”

Her father, Inman Majors, is the author of six novels and an English professor at James Madison University in Harrisonburg, Virginia.