A roundup of some of the most popular but completely untrue stories and visuals of the week. None of these is legit, even though they were shared widely on social media. The Associated Press checked them out. Here are the real facts:

CLAIM: A video circulating online shows a person firing an AR-15 rifle, and some posts identify her as Swedish environmental activist Greta Thunberg.

THE FACTS: The shooter in the video is not Thunberg. It's another young Swede named Emmy Slinge, who uploaded the original video to her Twitter account. The video, which some posts described as showing Thunberg discharging a rifle, began to circulate after the teenage environmental activist took part in a global climate summit in Madrid earlier this month. “Greta with a gun? Will the hypocritical lefties still support her, or is this now a call to arms?” asked one Facebook post containing the video. But the person firing the rifle is actually Slinge, who originally tweeted the video Dec. 7, with no reference to Thunberg. Some of her other tweets also contain images showing guns and shooting practice. Slinge confirmed to AP that she was the person firing the rifle in the video. She tweeted that her friends have been joking for months about her resemblance to the Swedish climate activist. On Saturday, after she tweeted the video of her firing the AR-15, the situation spun out of control on social media, with “unexpected consequences,” she said. These days, she said, have been “the strangest” of her life. “All this because I look a little like Greta? What strange times we live in.” 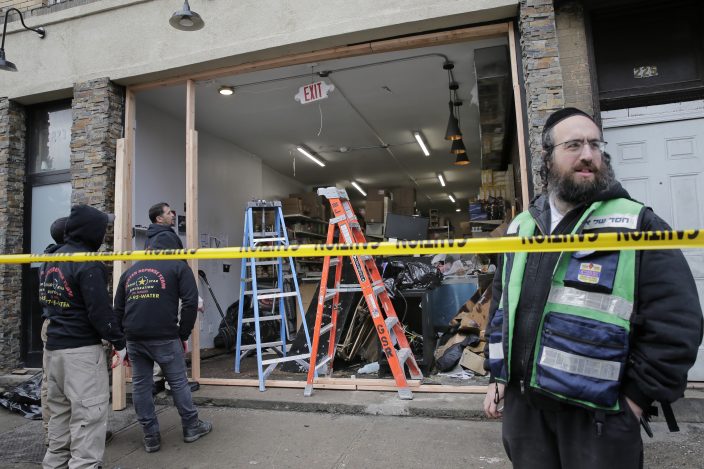 FILE - In this Wednesday, Dec. 11, 2019, file photo, people work to secure the scene of a shooting at a kosher supermarket in Jersey City, N.J. On Friday, Dec. 13, 2019, The Associated Press reported on photos circulating online incorrectly claiming to show the assailants involved in Tuesday’s Jersey City gunbattle. The photos actually show Darius Bolden and Yasmin Tejada, who were connected to a separate murder case that dates back to August. (AP PhotoSeth Wenig)

CLAIM: The photo of 4-year-old Jack Williment-Barr lying on the Leeds General Infirmary floor on top of a coat with an oxygen mask nearby was staged.

THE FACTS: The photo was not staged, despite claims circulating online suggesting that it was. Leeds Teaching Hospitals NHS Trust confirmed the details of the photo, with a statement explaining that the hospital in Leeds, England, did not have enough beds for the boy and that he had to wait four hours before being admitted to the Children’s Assessment and Treatment Unit. “We are extremely sorry that there were only chairs available in the treatment room, and no bed,” Dr. Yvette Oade, Chief Medical Officer at Leeds Teaching Hospitals NHS Trust, said in the statement. “This falls below our usual high standards, and for this we would like to sincerely apologise to Jack and his family.” The photo gained traction Monday after a video surfaced showing Prime Minister Boris Johnson refusing to look at the photo. By Tuesday, social media users began spreading a Facebook post from one user who said her friend was a senior nursing sister at the hospital where Jack was being treated. “The boy shown on the floor by the media was in fact put there by his mother who then took photos on her mobile phone and uploaded it to media outlets before he climbed back into his trolley,” the post said. “He was on a hospital trolley in the paediatric A&E having been seen within 20 minutes.” Social media users then took screenshots from the Facebook post and continued to spread them on Facebook and Twitter even after the original post was taken down. Oade said in a statement that the hospital unit was experiencing exceptionally high levels of demand at the time, requiring the boy to wait in a treatment room until a bed became available. The Yorkshire Evening Post first ran the original story detailing Jack’s hospital experience after his mother reached out. In additional photos with the story, the 4-year-old can be seen wearing an oxygen mask and standing next to a medical supply cart. Daniel Sheridan, who first reported the story, addressed the false claims on Twitter. “No story would ever be published by @LeedsNews without full verification,” Sheridan said on Twitter, referencing the Post’s Twitter handle. 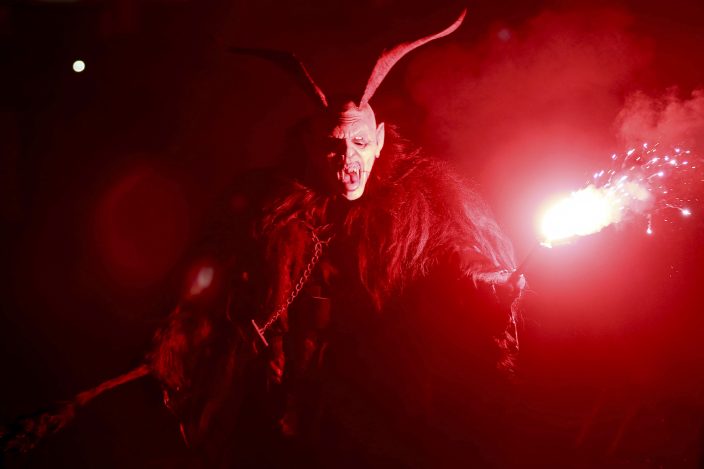 FILE - In this Saturday, Dec. 1, 2018, file photo, a man dressed as the pagan character Krampus screeches at spectators during a traditional Krampus run in Hollabrunn, Austria. On Friday, Dec. 13, 2019, The Associated Press reported on a video circulating online incorrectly described as showing migrants trying to disrupt a parade of St. Nicholas in Austria and being rebuffed by men dressed as Krampus. In the statement, the organizers say that the people seen in the video are not migrants but locals wearing padded clothing who volunteered to provoke the Krampus characters. (AP PhotoRonald Zak)

THE FACTS: The photos circulating on social media are from a different murder case that dates back to August. They don’t show the assailants involved in Tuesday’s Jersey City gunbattle. The pair of photos emerged Wednesday, falsely describing them as showing the two attackers involved in a shooting that killed six in Jersey City a day earlier. The people in the photo were actually Darius Bolden, and Yasmin Tejada, who were linked to an August shooting. The Gateway Pundit, a conservative blog, posted photos of Bolden and Tejada in a story about Tuesday’s shooting; the photos also appeared in a Gateway Pundit tweet linking to their story. Several other Twitter and Facebook accounts also posted the incorrect photos. Bolden and Tejada were arrested earlier this year for the fatal shooting of Jason Dunbar in August, also in Jersey City. The same photos were posted on the Facebook page of the Hudson County Prosecutor’s Office in October. According to local reports, Bolden was arrested and charged for the murder of Dunbar, while Tejada was charged with hindering the homicide investigation. In the separate attack on Tuesday, the assailants, David N. Anderson, 47, and Francine Graham, 50, opened fire on civilians and police officers in Jersey City, New Jersey authorities confirmed in a press conference on Wednesday. The attack began at a cemetery and ended at a kosher market, leaving six people dead -- a police officer, the two attackers and three bystanders. New Jersey Attorney General Gurbir Grewal later said the attack was driven by hatred of Jews and law enforcement and is being investigated as an act of domestic terrorism.

CLAIM: Video shows migrants trying to disrupt a parade of St. Nicholas in Austria only to have men dressed as Krampus, a goat-like Central European folk figure with horns, defend the festival.

THE FACTS: Event organizers posted on Facebook that the people in the video seen running from the devilish characters were locals dressed in padded clothing who volunteered to be part of the festivities in Vipiteno-Sterzing, a town in northern Italy. The town’s mayor also said no migrants were attacked at the event. In the video, shot Dec. 5, people are running from locals dressed as Krampus, a folkloric character who punishes misbehaving children during the Christmas season. The video goes on to show people dressed as Krampus striking people running down the street with bundles of birch branches. At one point in the video, two people dressed as Krampus can be seen striking and kicking a man who has fallen to the ground. Social media users began sharing the video after the event to suggest that it showed migrants disrupting Christmas festivities, and people dressed as Krampus retaliating. The organizers of the event posted a statement on Facebook after the false claims began circulating, saying the people seen in the video are not migrants but locals wearing padded clothing who volunteered to provoke the Krampus characters. “The racist accusations have no bearing in truth,” the statement reads. “The youth being whipped in the video are friends and acquaintances of the devils of Vipiteno.” The group’s page includes photos of people dressed as Krampus, wearing horns, red clothing and black paint on their faces. The mayor of the town, Fritz-Karl Messner, spoke out to local news outlets confirming that no migrants were insulted or attacked at the event. Messner told Rai News 24, an Italian news outlet, that for outsiders the whipping may seem strange, but it is all part of the Krampus tradition. 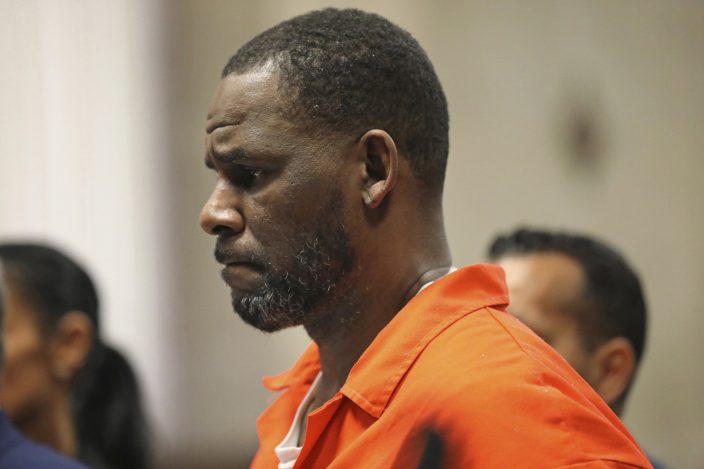 FILE - In this Sept. 17, 2019 file photo, R. Kelly appears during a hearing at the Leighton Criminal Courthouse in Chicago. On Friday, Dec. 13, 2019, The Associated Press reported on stories circulating online incorrectly asserting that Kelly was sentenced to 104 years in prison. The 52-year-old singer, who is in federal custody, hasn’t been sentenced. (Antonio PerezChicago Tribune via AP, Pool)

THE FACTS: The 52-year-old R&B singer, who is in federal custody, hasn’t been sentenced. Kelly is facing a series of sexual misconduct charges in state and federal cases in Illinois, New York and Minnesota. A post has been circulating for at least a month on Facebook and Twitter falsely claiming that Kelly was sentenced to 104 years in prison. One Facebook post alone had over 15,000 shares. According to AP reporting, Kelly was arrested in Chicago in February on 10 counts of sexually abusing three girls and a woman. In May, Cook County prosecutors charged Kelly, adding 11 sex-related counts, which include sexual assault of a minor. Kelly has pleaded not guilty to those charges. In July, he was again arrested while walking his dog in Chicago. He was hit with two separate federal indictments, one filed in Illinois and another in New York. The two indictments charged Kelly with an array of sex-related crimes, including producing child pornography, kidnapping, racketeering and sexual exploitation of a child. He pleaded not guilty to those charges. Last Thursday, federal prosecutors brought new charges against Kelly related to his marriage to singer Aaliyah. The two wed in a secret ceremony in 1994, when Aaliyah was 15 and Kelly was 27. Due to her age at the time, the marriage was annulled months later. In the charges announced Thursday, federal prosecutors accused Kelly of paying a bribe to obtain a false ID for an unnamed female the day before their wedding. Aaliyah died in a plane crash in 2001. The singer is scheduled to face trial in federal court in Chicago in April, and in Brooklyn in May. A Cook County judge ordered the singer to stand in a local trial for one of four sexual abuse cases in September. If convicted on all the charges he faces, Kelly could spend his life in prison.

This is part of The Associated Press' ongoing effort to fact-check misinformation that is shared widely online, including work with Facebook to identify and reduce the circulation of false stories on the platform.