Melania Trump on Friday appeared to condone her husband's criticism of 16-year-old Greta Thunberg, saying through a spokeswoman that her 13-year-old son, Barron, is in a different category than the teenage climate activist “who travels the globe giving speeches.”

“He is a 13-year-old who wants and deserves privacy,” spokeswoman Stephanie Grisham said in an emailed statement the day after President Donald Trump lashed out at Thunberg because Time magazine had named her “Person of the Year.”

The first lady's apparent acceptance of her husband's actions stood in contrast to the work she's doing through her “Be Best” initiative to combat online bullying and teach children to be kind. 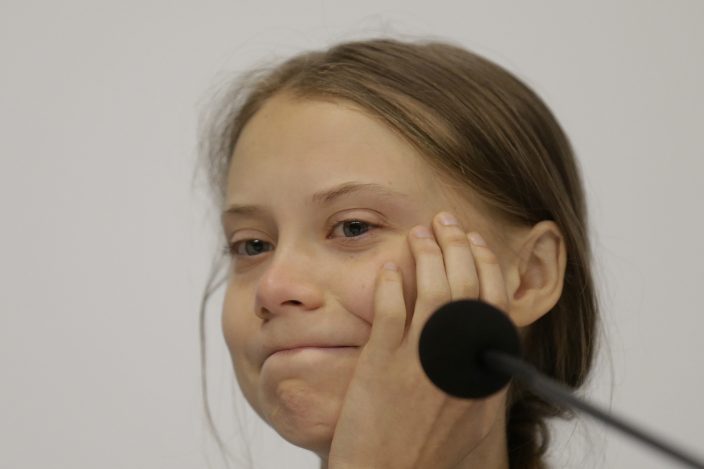 The president tweeted Thursday that “Greta must work on her Anger Management problem, then go to a good old fashioned movie with a friend!” He said it was “ridiculous” that Time had chosen her for the honor.

Trump mocked the teenage activist, who has Asperger's syndrome, a week after the first lady tweeted angrily at Stanford law professor Pamela Karlan for mentioning Barron during her testimony as a Democratic witness at a House Judiciary Committee impeachment hearing.

“A minor child deserves privacy and should be kept out of politics. Pamela Karlan, you should be ashamed of your very angry and obviously biased public pandering, and using a child to do it,” Mrs. Trump tweeted.

At one point during her testimony, Karlan said that while Trump can “name his son Barron, he can't make him a baron.” Karlan was trying to make a point that Trump is a president and not a king. At the end of the hearing, Karlan apologized for the comment.

Grisham said the first lady will continue to use “Be Best"' to help children.

“It is no secret that the president and first lady often communicate differently — as most married couples do,” Grisham said.

Spotify tunes into pets with personalised playlists for ...

Third embryo created in efforts to save northern white ...

Lorry driver who pulled woman from burning car given br ...

What impeachment? All calm as Melania Trump visits Capitol

Melania Trump to visit national parks in Wyoming on Thursday

Melania Trump to announce expansion of 'Be Best' initiative

Melania Trump to celebrate 1st year of 'Be Best' initiative