Anthony Davis scored 33 points, LeBron James had 28 while coming within a rebound of a triple-double and the Los Angeles Lakers held off the Miami Heat 113-110 on Friday night.

James had 12 assists and nine rebounds and Davis grabbed 10 rebounds for the Lakers. They improved to 23-3, extended the second-longest road winning streak in franchise history to 13 games and rallied from a double-digit deficit to win for the eighth time already this season.

They also dealt Miami its first home loss of the season, after an 11-0 start. 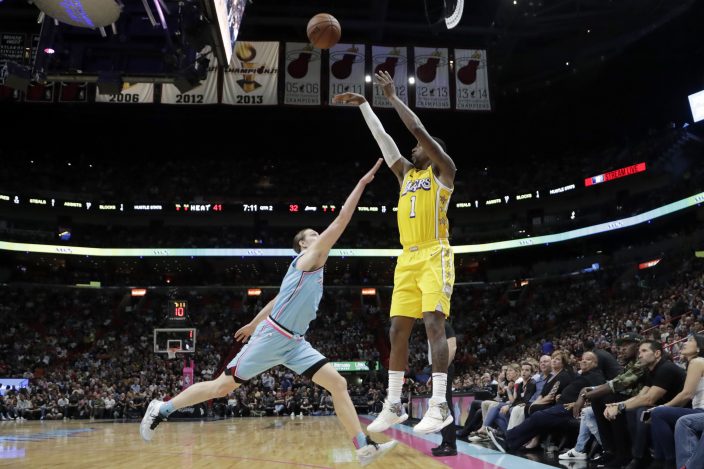 The Lakers outrebounded Miami 50-34, and the last of those was the biggest. Kentavious Caldwell-Pope missed a free throw with 8 seconds left to keep the Heat within two, but Miami couldn’t get the rebound. Caldwell-Pope went back to the line with 4.2 seconds left, made one of two again and the Lakers’ lead was pushed to three.

Butler took the last shot for Miami, a 3-pointer with about a second left. It hit the rim and bounced off, the Heat argued that he was fouled to no avail, and the Lakers survived in James’ lone trip this season to the city where he won championships in 2012 and 2013. They had to work for this one: The Lakers were down by as many as 14 in the first half.

James connected on a deep 3-pointer with 8:21 left in the third to tie the game at 65-65, spinning halfway around afterward and punching himself in the chest with both fists as the Heat called time — after what had been a 10-point lead a mere 3:05 earlier was gone in a flash.

Davis hit a 3 on the next possession to put the Lakers on top, JaVale McGee threw down an alley-oop lob from James while getting fouled a few seconds later to push the lead to 71-65, and Los Angeles was suddenly in control. The Lakers’ lead got as big as 11 later in the third — a 21-point turnaround from earlier in the quarter — before Miami clawed back within three going into the fourth. But the Lakers held the lead the rest of the way. 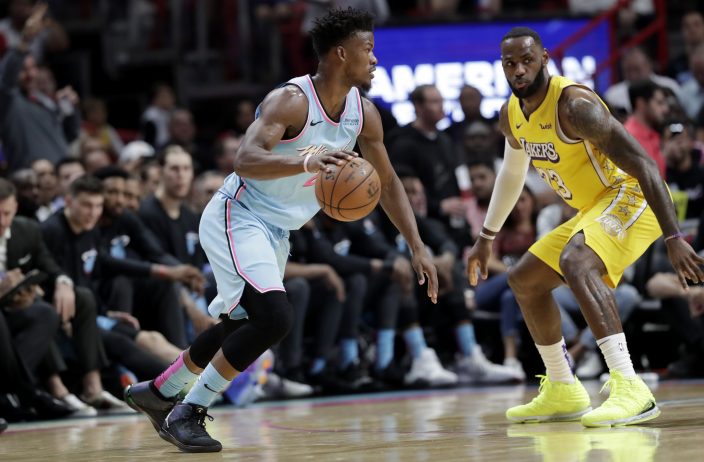 Heat: Celebrities at the matchup included Jennifer Lopez and Alex Rodriguez — both with personalized Heat “Vice” jerseys — along with Heat legend Chris Bosh, Gucci Mane and DJ Khaled. ... Not only had Miami been 11-0 at home, but the Heat also were 13-1 when leading at halftime and 14-1 in games where they had led by more than 10 points.

It was the 50th time, including playoffs, that Heat coach Erik Spoelstra and Lakers coach Frank Vogel went head-to-head — the majority of those coming in the four-year span where James was in Miami and Indiana was an annual postseason problem. “It’s always a chess match,” Vogel said. Spoelstra leads the head-to-head, 26-24.

James is headed to Columbus, Ohio, on Saturday for a high school game like no other. It pits his alma mater, St. Vincent-St. Mary’s of Akron, against Sierra Canyon — the team featuring, among others, his son Bronny and Dwyane Wade’s son Zaire. James said he won’t be conflicted. “I’ll be cheering for my son,” James said.

Lakers: At Atlanta on Sunday.

Heat: At Dallas on Saturday.