The Vegas Golden Knights went on the offensive in OT, and the aggressive approach quickly paid off.

Max Pacioretty scored on a backhander 51 seconds into overtime and the Knights beat the Dallas Stars 3-2 on Friday night.

Vegas coach Gerard Gallant put Pacioretty, the team's scoring leader, and Mark Stone on the ice to start the overtime. 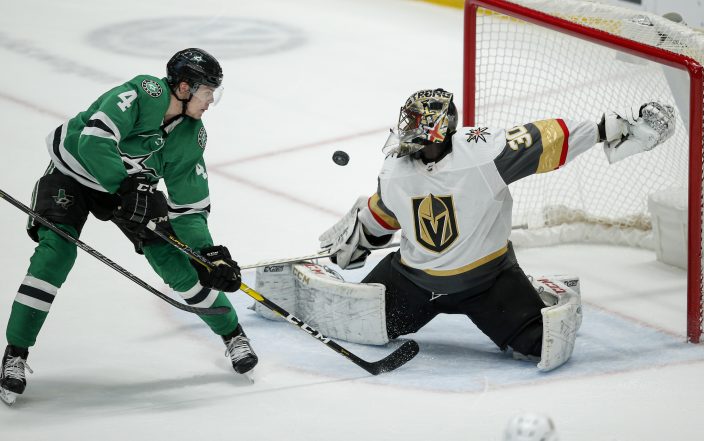 “In the D-zone I worry about it,” Gallant said. “But in the offensive zone, no. They are two good hockey players and I want to get them out there. We tried something better and it worked.”

Dallas’ Jamie Benn had tied it with 5:11 remaining in the third period. He worked a give-and-go, passing from behind the net to Tyler Seguin, then skating into the slot to deflect Seguin’s return pass past goalie Malcolm Subban.

Taylor Fedun put the Stars ahead 1-0 in the first period. The Golden Knights took a 2-1 lead in the second on goals by William Karlsson and newcomer Chandler Stephenson. 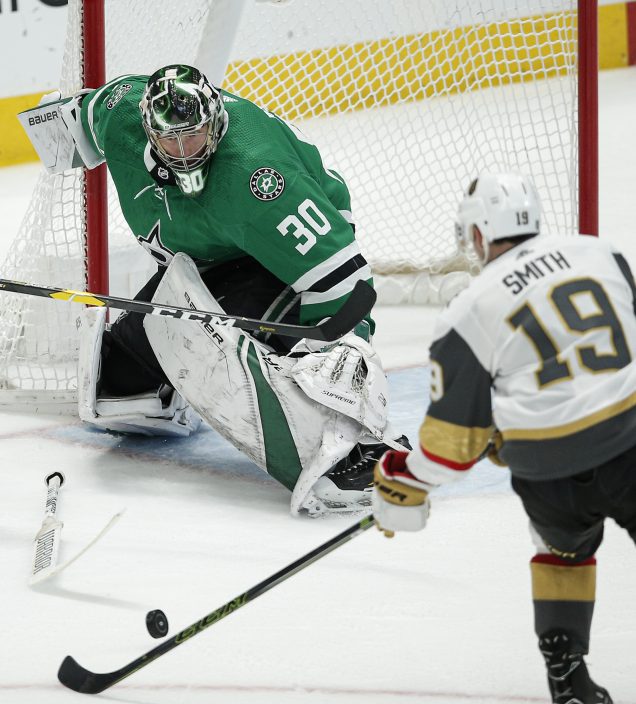 “You could see the difference when we were playing as a unit of five,” Pacioretty said, “making sure we make life hard on (Dallas’) forwards on the blue lines. We deserved, I felt, to come out with a win.”

Subban made 28 saves for his first win in three career games against Dallas.

Ben Bishop stopped 28 shots for Dallas, which had won three in a row and 10 of 11 home games.

Fedun, a defenseman activated because John Klingberg was a late scratch because of a family illness, skated backward across the top of the slot and sent a wrist shot over Subban at 15:14 of the first. Fedun had been a healthy scratch in all six games since Nov. 26.

Fedun was informed about an hour before the puck dropped that he would be playing.

“It doesn't matter what's happening behind the scenes in there,” Fedun said. “You got to perform and that's what matters. However you go about doing that, you got to find a way to get it done.”

Fedun’s second goal this season was the only one of 16 shots on Subban in the first period.

“Malcolm was huge in the first,” Gallant said. “He had a lot of good scoring chances against so he was the difference in the first for sure.”

A bigger difference was Vegas’ superior play in the second period and beyond.

“A very good first and a very bad second is what you saw,” Stars interim coach Rick Bowness said. “I thought it was even in the third. We had a great chance in overtime but didn’t capitalize. We got caught on a change and they did it.”

Dallas is 1-0-1 since Bowness took over after head coach Jim Montgomery was fired.

Karlsson led the Golden Knight’s resurgence in the second period. Bishop stopped Karlsson’s shot from the left faceoff circle 3:35 into the period, but 45 seconds later Karlsson beat the goalie with a snap shot into the left side of the net. That tied the game at 1.

Neither team had a penalty until the Stars’ Blake Comeau went off for hooking at 12:04 of the second. Dallas killed the Golden Knights’ power play, with Bishop making three saves.

The Golden Knights came back just 37 seconds later for a 2-1 lead when Stephenson eluded Fedun for a wrist shot from the left circle. In six games since being traded from Washington, he has two goals and an assist while playing nearly three minutes more per game for Vegas.

“I didn’t know much about him before he came,” Pacioretty said. “I knew he was a fast player and he probably didn’t get as much of a chance as he deserved in Washington. As you saw tonight, he’s got a phenomenal shot.”

NOTES: Vegas C Cody Eakin (upper body injury), who previously played for the Stars, missed his seventh straight game. … Jonathan Marchessault’s assist on Karlsson’s goal was his 100th career point. … Mark Stone and Shea Theodoer each had two assists for Vegas. ... Neither team scored on its two power plays. … Dallas has killed all 12 penalties in the last five games. … Vegas had no penalties Thursday at St. Louis but had allowed at least one power-play goal in the three games before that. … The Stars recognized former players and new Hockey Hall of Famers Sergei Zubov and Guy Carbonneau in a pregame ceremony. With Ed Belfour, Brett Hull, Mike Modano and Joe Nieuwendyk, six players from Dallas’ only Stanley Cup winner in 1999 are now in the hall.

Golden Knights: Play Vancouver on Sunday in the first of two home games.

Stars: Make a quick trip for one game at Nashville on Saturday.