Marc Leishman said it was probably the best he's ever felt on a golf course. Abraham Ancer said he never gave up hope.

The Internationals pair staged the most improbable of comebacks at the Presidents Cup on Saturday, stealing a half-point when they finished all square in their foursomes match against Americans Justin Thomas and Rickie Fowler despite being 5-down after 10 holes at Royal Melbourne.

That left the Internationals with a 10-8 points lead going into Sunday's 12 singles matches. 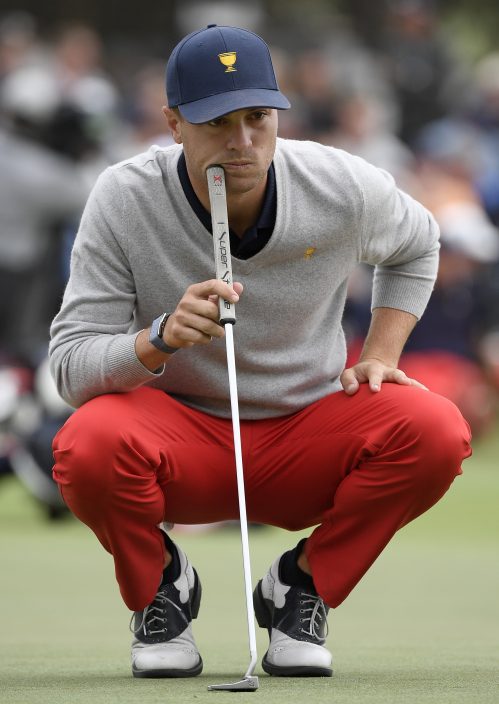 U.S. team player Justin Thomas leans on his putter while on the 18th green in their foursome match during the President's Cup golf tournament at Royal Melbourne Golf Club in Melbourne, Saturday, Dec. 14, 2019. (AP PhotoAndy Brownbill)

The Internationals had a woeful start, making bogeys on four of the first seven holes to hand the Americans the big lead. That remained until Ancer's approach shot to within five feet set up a Leishman birdie on the 11th.

On the 12th, Leishman returned the favor, hitting his approach to 10 feet to set up Ancer's birdie.

It was 3-up for the Americans, where it remained until the 16th, when the Americans gave Leishman and Ancer a bit of help. Fowler missed a six-footer for par at 16 before Thomas' miss from nine feet meant the American lead was just 1-up heading to the last. 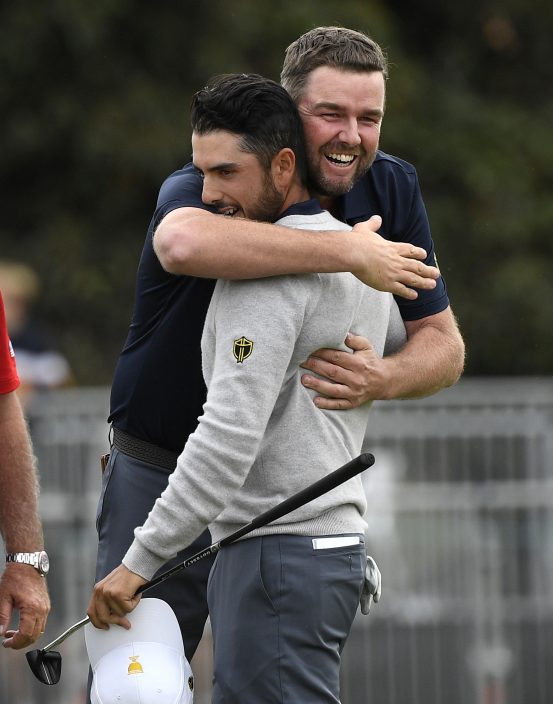 Thomas' tee shot into the trees gave the Internationals the advantage on 18 and Leishman made no doubt for the half-point when he put his approach to seven feet to set up another birdie by Ancer to halve the match.

The Americans made three bogeys to finish the match.

“It was unbelievable, you talk about coming back from the dead," International captain Ernie Els said. “Five-down and 4-down, you know, through eight and nine holes, come back and get that result, I mean, that's a turnaround. That gets momentum."

Leishman said having a partner made the half point extra special.

“We've all won up here; we've won tournaments, but we don't get chances to play with a teammate very often," Leishman said. “That's probably as good as I've felt on a golf course, and I only halved the match."

“Once we start making putts there and seeing the ball go in — I think even 11, 12, obviously were huge, seeing some putts go in, hitting some good shots," Ancer added. “Hey, OK we're back in this. For me, I never really lost hope.

“We knew we needed some help and we needed to execute to perfection, and thankfully we did. It was just an unbelievable experience."

Adam Scott, appearing at a media conference with Leishman and Ancer after the match, said “there's a lot of heart here sitting next to me ... we finished on a high with these guys."

One year on, Brazilian city haunted by deadly dam colla ...

Washington Nationals “face of the ...