Australia continue to bat New Zealand out of the opening test match as it extended its lead to 325 runs at tea on the third day under the lights at Perth Stadium.

After New Zealand was skittled out for 166 at lunch in response to Australia’s 416, the home side refused to enforce the follow-on, and batted again to post 75-1 at the break for the loss of opener David Warner (19).

Opener Joe Burns, 32 not out, and in-form Marnus Labuschagne, 18 not out, will resume looking to extend the lead and put the game beyond the tourists. Labuschagne, who top scored with 143 in the first innings — his third consecutive ton — was dropped on 5 when Colin de Gradhomme spilt a difficult running catch off left-arm swing bowler Neil Wagner. 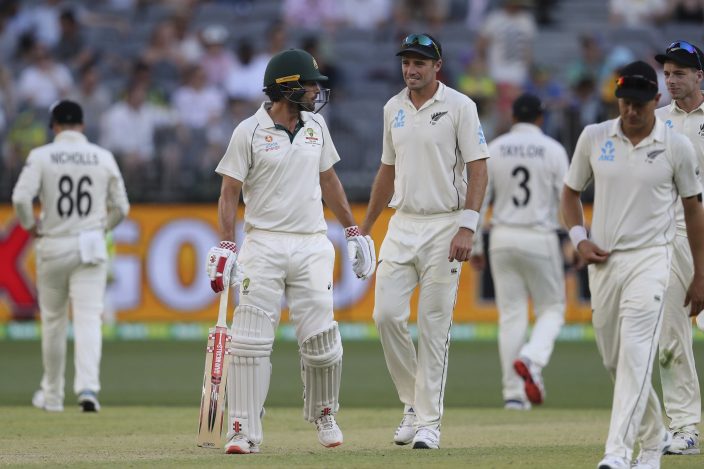 Warner lived a charmed life for over an hour facing 63 ball before miscuing a pull of Tim Southee and was caught at mid on. He survived a review for a catch behind on 15 and on 17 narrowly escaped a run out.

During the innings Warner, playing his 82nd test, became the 12th Australian batsman to amass 7,000 runs in test cricket. He brought up the milestone with a cover driven boundary off Southee.

Despite the 250-run first innings lead, Australia was wary of bowling the second time as temperature topped 40 Celsius (107 F) for the third day in a row. This was in addition to being a bowler short with swing bowler Josh Hazlewood ruled out of the match with a hamstring strain. 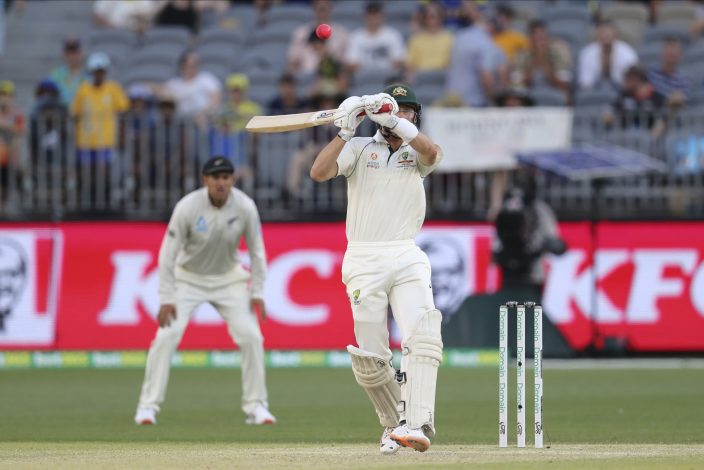 Earlier, fast bowler Mitchell Starc took 5-52 — his third five-wicket innings in seven day-night tests and his 13th overall in 55 tests — to hurry New Zealand’s batting demise on a wicket that is beginning to produce variable bounce.

After slicing through the New Zealand top order with four wickets under lights on the second evening, Starc claimed his fifth wicket controversially when de Grandhomme was adjudged caught by on-field umpire Aleem Dar and upheld by review.

De Grandhomme pulled a couple of boundaries off Starc, and two balls later, tried to fend a short pitch delivery that hit the face of the helmet before Steve Smith at second slip caught it. De Grandhomme reviewed Dar’s decision only to be upheld despite a series of inconclusive replays. 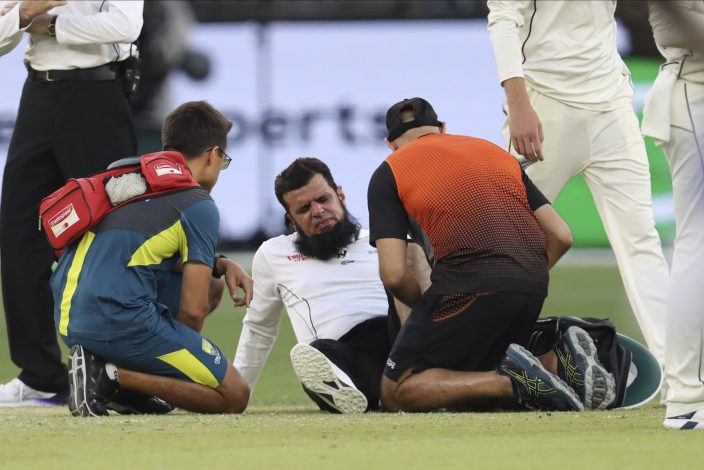 Umpire Aleem Dar is attended to by medical staff after New Zealand's Mitchell Santner ran into him during play in their cricket test against Australia in Perth, Australia, Saturday, Dec. 14, 2019. (AP PhotoTrevor Collens)

Ross Taylor top scored for New Zealand with an unblemished 80 runs and stood between New Zealand and the hosts with a 134-ball innings over 2 ½ hours hitting nine boundaries before offspinner Nathan Lyon (2-48) forced an edge and Smith at slip took his third catch.

The only other notable contribution came from skipper Kane Williamson (34) before he was brilliantly caught by Smith at second slip to end a fighting 76-run third wicket stand. In the second evening.

NZ lose top order; 141-3 at lunch on day 3 against Australia

New Zealand in trouble against Australia on 3rd day at MCG