The promise of reparations to atone for historical ties to slavery has opened new territory in a reckoning at U.S. colleges, which until now have responded with monuments, building name changes and public apologies.

Georgetown University and two theological seminaries have announced funding commitments to benefit descendants of the enslaved people who were sold or toiled to benefit the institutions.

While no other schools have gone so far, the advantages that institutions received from the slavery economy are receiving new attention as Democratic presidential candidates talk about tax credits and other subsidies that nudge the idea of reparations toward the mainstream. 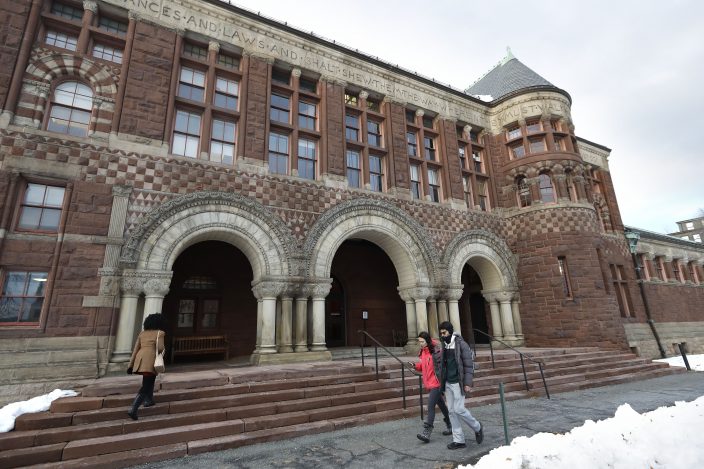 In this Thursday, Dec. 5, 2019 photo passers-by walk near an entrance to a building at Harvard Law School, in Cambridge, Mass. A cluster of commitments to atone for historical ties to slavery marks new territory in a reckoning at U.S. colleges that have responded up until now with monuments, building names changes and public apologies. (AP PhotoSteven Senne)

The country has been discussing reparations in one way or another since slavery officially ended in 1865. This year marks the 400th anniversary of the arrival of the first slave, launching the violence afflicted on black people to prop up the Southern economy.

University of Buffalo senior Jeffrey Clinton said he thinks campuses should acknowledge historical ties to slavery but that the federal government should take the lead on an issue that reaches well beyond higher education.

“It doesn’t have to be trillions of dollars ... but at least address the inequities and attack the racial wealth gap between African Americans and white Americans and really everybody else, because this is an American-made institution. We didn’t immigrate here,” said Clinton, a descendant of slaves who lives in Bay Shore, New York. 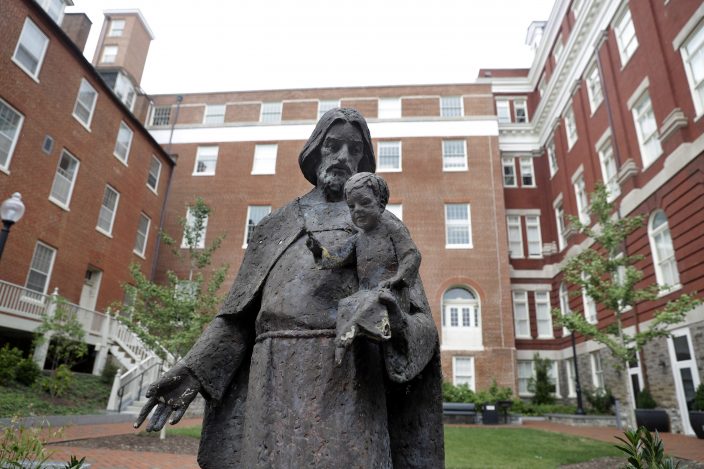 FILE- In this Sept. 1, 2016 file photo, a Jesuit statue is seen in front of Freedom Hall, formerly named Mulledy Hall, on the Georgetown University campus in Washington. Georgetown University and two theological seminaries have announced plans for reparations to benefit descendants of the enslaved people who played a role in the institutions' success. At least 56 universities have joined a University of Virginia-led consortium, Universities Studying Slavery, to explore their ties to slavery and share research and strategies. (AP PhotoJacquelyn Martin, File)

A majority of Georgetown undergraduates voted in April for a nonbinding referendum to pay a $27.20-per-semester “Reconciliation Contribution” toward projects in underprivileged communities that are home to some descendants of 272 slaves who were sold in 1838 to help pay off the school’s debts.

Georgetown President John DeGioia responded in October with plans instead for a university-led initiative, with the goal of raising about $400,000 from donors, rather than students, to support projects like health clinics and schools in those same communities.

At least 56 universities have joined a University of Virginia-led consortium, Universities Studying Slavery, to explore their ties to slavery and share research and strategies.

In recent years, some schools, like Yale University, have removed the names of slavery supporters from buildings. New monuments have gone up elsewhere, including Brown University’s Slavery Memorial sculpture — a partially buried ball and chain — and the Memorial to Enslaved Laborers under construction at the University of Virginia.

“It’s a very diffused kind of set of things happening around the nation,” said Guy Emerson Mount, an associate professor of African American history at Auburn University. “It’s really important to pay attention to what each of these are doing” because they could offer learning opportunities and inform national discussions on reparations.

Virginia Theological Seminary in September announced a $1.7 million endowment fund in recognition of slaves who worked there. It said annual allocations would go toward supporting African American clergy in the Episcopal church and programs that promote justice and inclusion.

The Princeton Theological Seminary in New Jersey followed with a $27.6 million endowment after a historical audit revealed that some founders used slave labor.

“We did not want to shy away from the uncomfortable part of our history and the difficult conversations that revealing the truth would produce,” seminary President M. Craig Barnes said in October.

In an October letter to Harvard University’s president, Antigua and Barbuda’s prime minister noted the developments at Georgetown and the seminaries and asked the Ivy League school to consider how it could make amends for the oppression of Antiguan slaves by a plantation owner whose gift endowed a law professorship in 1815. Harvard’s president wrote back that the school is determined to further explore its historical ties to slavery.

Harvard in 2016 removed a slave owner's family crest from the law school seal and dedicated a plaque to four slaves who lived and worked on campus.

At the University of Buffalo, some have urged the public school to consider the responsibility it bears having been founded by the 13th U.S. president, Millard Fillmore, who signed the Fugitive Slave Act to help slave owners reclaim runaways. Students have not formally raised the idea of reparations, according to a school spokesman, but they led a discussion on the topic as part of Black Solidarity Week last month.

William Darity, a Duke University public policy professor and an expert on reparations, said the voices of college students have helped bring attention to reparations in a way that hasn’t been seen since Reconstruction.

But he has warily watched what he sees as a piecemeal approach to an issue he believes merits a congressional response.

“I don’t want anybody to be under the impression that these constitute comprehensive reparations,” Darity said.

Supporting a reparations program for all black descendants of American slaves “would be the more courageous act,” he said.

Few Americans support reparations, according to a recent Associated Press-NORC Center for Public Affairs Research poll. It showed that only 29% say the government should pay cash reparations to descendants of enslaved black people.

University of Buffalo associate professor Keith Griffler, who specializes in African and African American studies, said he sees the cusp of a movement on college campuses.

“And it’s probably not surprising that some of the wealthier private institutions have been the first to take those kinds of steps, because public universities still have their funding issues.

“The conversations, just acknowledging these kinds of things,” Griffler said, “I think would go a long way toward making students feel that at least their voices are being heard.”

The Mideast peace plan announced b ...

At Harvey Weinstein’s trial, a big role for other accus ...

In his former life as a Hollywood ...