Leaving the European Union is not the only split British Prime Minister Boris Johnson has to worry about.

Johnson’s commanding election victory this week may let him fulfil his campaign promise to “get Brexit done,” but it could also imperil the future of the United Kingdom of England, Scotland, Wales and Northern Ireland. Scotland and Northern Ireland didn’t vote for Brexit, didn’t embrace this week’s Conservative electoral landslide -- and now may be drifting permanently away from their neighbors.

In a victory speech Friday, Johnson said the election result proved that leaving the EU is “the irrefutable, irresistible, unarguable decision of the British people.” 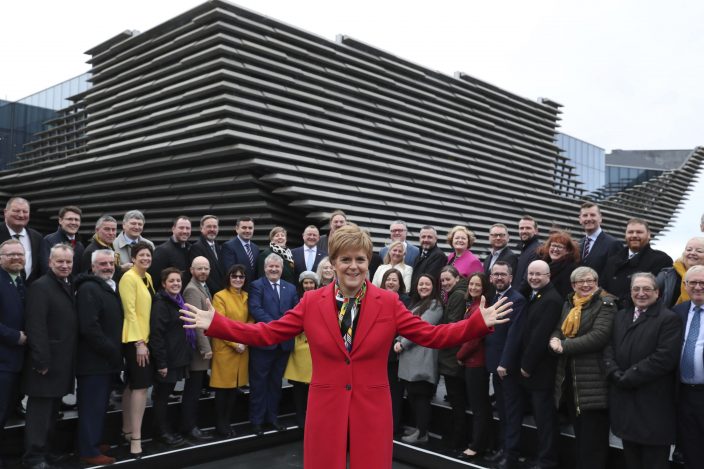 Scottish First Minister Nicola Sturgeon poses with newly elected MPs of Scottish National Party (SNP) during a photo opportunity as they gather outside the V&A Museum in Dundee, Scotland, Saturday Dec. 14, 2019. Sturgeon delivered a landslide election victory for the SNP, with a campaign focused on demands for a second referendum on Scottish independence, but Prime MinisterBoris Johnson has flatly rebuffed the idea of another vote. (Andrew MilliganPA via AP)

Arguably, though, it isn’t. It’s the will of the English, who make up 56 million of the U.K.’s 66 million people. During Britain’s 2016 referendum on EU membership, England and much smaller Wales voted to leave bloc; Scotland and Ireland didn’t. In Thursday’s election, England elected 345 Conservative lawmakers — all but 20 of the 365 House of Commons seats Johnson’s party won across the U.K.

In Scotland, 48 of the 59 seats were won by the Scottish National Party, which opposes Brexit and wants Scotland to become independent of the U.K.

SNP leader Nicola Sturgeon said her party’s “emphatic” victory showed that “the kind of future desired by the majority in Scotland is different to that chosen by the rest of the U.K.” 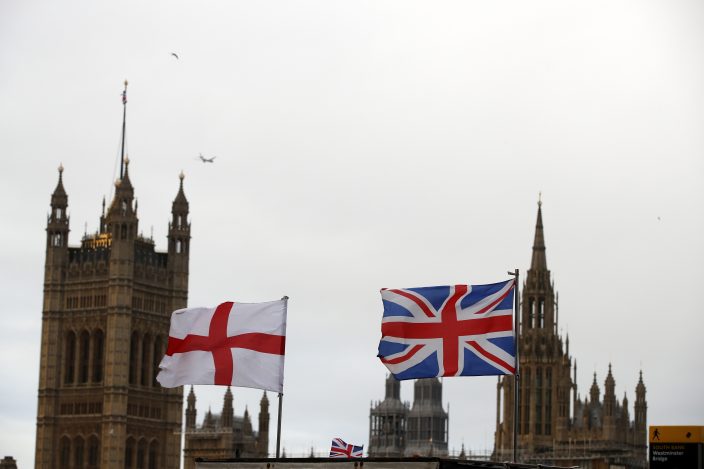 A British and an English flag wave in front of Houses of Parliament in London, Saturday, Dec. 14, 2019. With his hefty government majority, Prime Minister Boris Johnson is set to start the process next week of pushing Brexit legislation through Parliament to ensure Britain leaves the EU by the Jan. 31 deadline. (AP PhotoThanassis Stavrakis)

The SNP has campaigned for decades to make Scotland independent and almost succeeded in 2014, when Scotland held a referendum on seceding from the U.K. The “remain" side won 55% to 45%.

At the time, the referendum was billed as a once-in-a-generation decision. But the SNP argues that Brexit has changed everything because Scotland now faces being dragged out of the EU against its will.

Sturgeon said Friday that Johnson “has no mandate whatsoever to take Scotland out of the EU” and Scotland must be able to decide its future in a new independence referendum. 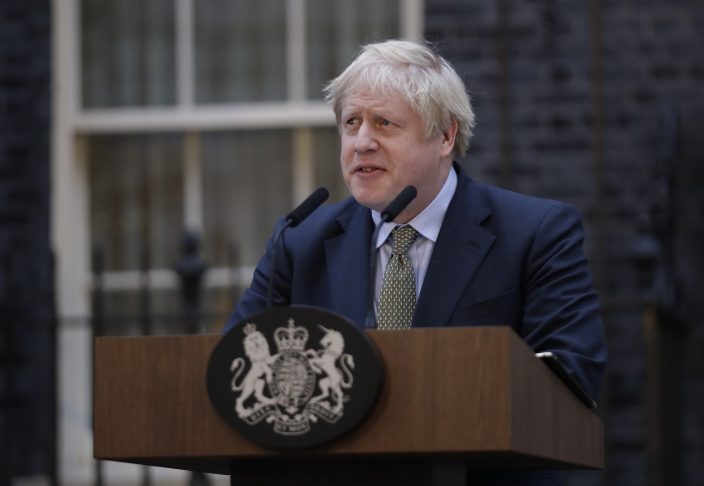 Britain's Prime Minister Boris Johnson speaks outside 10 Downing Street in London on Friday, Dec. 13, 2019. Boris Johnson's gamble on early elections paid off as voters gave the UK prime minister a commanding majority to take the country out of the European Union by the end of January, a decisive result after more than three years of stalemate over Brexit. (AP PhotoMatt Dunham)

Johnson insists he will not approve a referendum during the current term of Parliament, which is due to last until 2024. Johnson's office said the prime minister told the Scottish leader on Friday that “the result of the 2014 referendum was decisive and should be respected.”

The Scotsman newspaper summed up the showdown Saturday with front page face-to-face images of Sturgeon and Johnson: “Two landslides. One collision course.”

“What we’ve got now is pretty close to a perfect storm,” said historian Tom Devine, professor emeritus at the University of Edinburgh. He said the U.K. is facing an “unprecedented constitutional crisis” as Johnson’s intransigence fuels growing momentum for Scottish independence.

Politically and legally, it’s a stalemate. Without the approval of the U.K. government, a referendum would not be legally binding. London could simply ignore the result, as the Spanish government did when Catalonia held an unauthorized independence vote in 2017.

Mark Diffley, an Edinburgh-based political analyst, said Sturgeon “has said that she doesn't want a Catalonia-style referendum. She wants to do this properly.”

There’s no clear legal route to a second referendum if Johnson refuses, though Sturgeon can apply political and moral pressure. Diffley said the size of the SNP’s win allows Sturgeon to argue that a new referendum is “the will of the people.”

Sturgeon said that next week she will lay out a “detailed democratic case for a transfer of power to enable a referendum to be put beyond legal challenge.”

Devine said the administrations in Edinburgh and London “are in a completely uncompromising condition” and that will only make the crisis worse.

“The longer Johnson refuses to concede a referendum, the greater will the pro-independence momentum in Scotland accelerate,” he said. ”By refusing to concede it, Johnson has ironically become a recruiting sergeant for increased militant nationalism.”

Northern Ireland has its own set of political parties and structures largely split along British unionist/Irish nationalist lines. There, too, people feel cast adrift by Brexit, and the political plates are shifting.

For the first time this week, Northern Ireland elected more lawmakers who favor union with Ireland than want to remain part of the U.K.

The island of Ireland, which holds the U.K.’s only land border with the EU, has proved the most difficult issue in Brexit negotiations. Any customs checks or other obstacles along the currently invisible frontier between Northern Ireland and EU member Ireland would undermine both the local economy and Northern Ireland’s peace process.

The divorce deal struck between Johnson and the EU seeks to avoid a hard border by keeping Northern Ireland closely aligned to EU rules, which means new checks on goods moving between Northern Ireland and the rest of the U.K.

“I think there is a good chance there will be a united Ireland within 10 years.”

In Scotland, Devine also thinks the days of the Union may be numbered.

Renee Graham in Edinburgh contributed to this story.

Rain delayed the toss in the serie ...

The dread was familiar. The fear t ...