Twenty-one years ago this Thursday, a Republican-led House approved two impeachment articles against Democrat Clinton. While that battle was bitterly partisan, it was blurrier than the near party-line votes expected this week when the House, now run by Democrats, is poised to impeach Republican Trump.

Two of the four Clinton impeachment articles were killed — something party leaders today would jump through hoops to avoid for fear of highlighting divisions. All four Clinton articles drew GOP opposition, peaking at 81 on one vote. That's an unthinkable number of defections today. 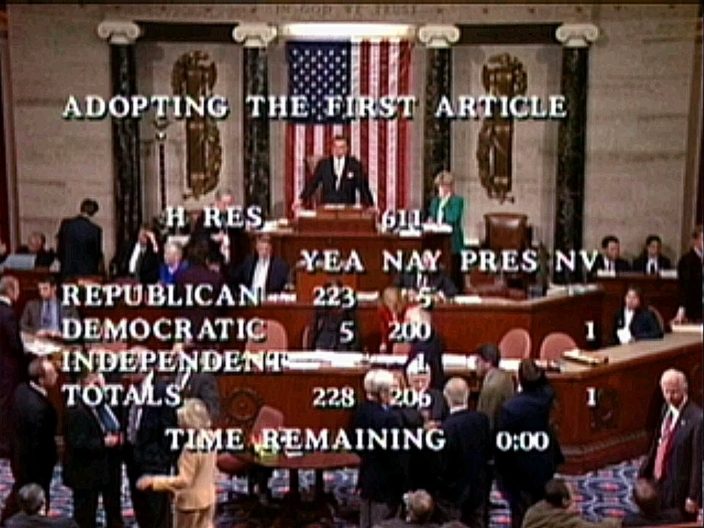 FILE - In this Dec. 19, 1998, file image from video, Speaker Pro Tempore Rep. Ray LaHood, R-Ill., prepares to announce the House vote of 228-206 to approve the first article of impeachment, accusing President Bill Clinton of committing perjury before a federal grand jury in Washington. Twenty-one years ago this Thursday, a Republican-led House voted to impeach Clinton. While that battle was bitterly partisan, it was blurrier than the clean, near party-line votes expected this week when the chamber _ now run by Democrats _ is poised to impeach President Donald Trump. (AP PhotoAPTN)

“Obviously it was partisan, but it wasn’t as intensely partisan as today is," said Rep. Peter King, R-N.Y., one of four Republicans who opposed all the Clinton impeachment articles and the last remaining member of that group in Congress. “So you could basically argue conscience, you could say you looked at it and didn’t think this was the way to go."

In the upcoming votes on impeaching Trump, Democrats expect support from all but a few — two to perhaps five — of their members. Republican leaders envision no GOP desertions.

Few defections are expected by either party when the GOP-run Senate holds a trial, probably in January, on whether to oust Trump from office. No one expects Democrats to muster the two-thirds Senate majority needed for removal over charges that he leveraged U.S. military aid and a White House meeting coveted by Ukrainian leaders to pressure them to announce investigations of his Democratic political foes. 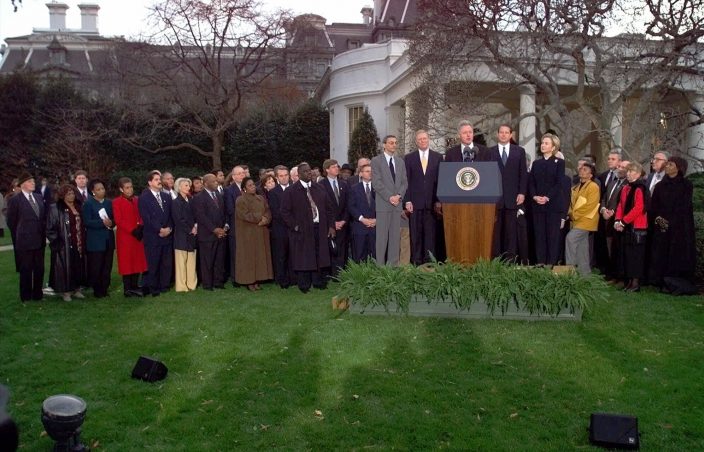 FILE - In this Dec. 19, 1998, file photo, then-President Bill Clinton is joined by Democratic lawmakers and aides outside the Oval Office of the White House in Washington, after the House of Representatives voted to impeach the president. Twenty-one years ago this Thursday, a Republican-led House voted to impeach then-President Bill Clinton. While that battle was bitterly partisan, it was blurrier than the clean, near party-line votes expected this week when the chamber _ now run by Democrats _ is poised to impeach President Donald Trump. (AP PhotoDoug Mills, File)

Most Democrats were dismissive of the GOP's impeachment charges that Clinton lied to a grand jury and others about his affair with White House intern Monica Lewinsky.

“The Constitution is really to protect the nation against the abuse of presidential power. Any husband could lie under oath about an affair. It doesn't take presidential powers to do that,” Rep. Zoe Lofgren, D-Calif., who opposed the Clinton impeachment and is still in Congress, said in an interview Friday.

Clinton was a lame duck but widely popular president who was presiding over a booming economy, and polling showed that impeachment had little support. That gave Democrats little reason to back the effort to remove him and made many Republicans think twice about backing impeachment.

That helps explain why 81 Republicans opposed one defeated Clinton impeachment article. The other three articles drew 28, 12 and 5 GOP “no” votes. No more than five Democrats backed any of the articles impeaching Clinton.

Former Rep. Tom DeLay, R-Texas, was chief House GOP vote counter in 1998 and was known as “The Hammer” for his effectiveness in lining up support. In an interview Friday, he said he urged wavering Republicans to read evidence gathered by Ken Starr, the independent counsel who headed the investigation into Clinton that led to the impeachment.

DeLay said party leaders “cannot break arms” on an impeachment vote because it is too important. That echoes current Speaker Nancy Pelosi, D-Calif., who has said she's not lobbying Democrats on the upcoming Trump votes.

Trump faces reelection next year and has a strong track record of weaponizing Twitter to demolish the political careers of Republicans who oppose him. Retired GOP Sens. Jeff Flake of Arizona and Bob Corker of Tennessee left Congress following running battles with Trump, and South Carolina Rep. Mark Sanford lost a party primary last year after running afoul of him.

“If you cross Trump, you’re a short-timer when it comes to politics,” said John Feehery, a GOP consultant and former House leadership aide.

In contrast, several House Republicans who opposed at least one Clinton impeachment article saw their political careers prosper. They include John Thune of South Dakota, now the No. 2 Senate GOP leader; John Kasich, who became a two-term Ohio governor and challenged Trump for the 2016 presidential nomination; and current Sens. Rob Portman of Ohio and Richard Burr of North Carolina.

Sanford rose to South Carolina governor, but abandoned the job after admitting to an extramarital affair. He returned to the House but was defeated after clashing with Trump.

Gingrich became speaker and embraced aggressive confrontations with Democrats. That culminated in the House impeachment of Clinton, which the GOP-led Senate later rejecting.

But even the Gingrich era's battles were tamer than today's fights, with Clinton's impeachment a case in point.

Back then, each party had scores of moderate lawmakers who would cross party lines on issues such as abortion, taxes and spending. Those numbers have dwindled dramatically, especially among House Republicans. Only three come from districts that Democrat Hillary Clinton carried in the 2016 presidential election. Thirty-one Democrats represent Trump-won districts, and they are their party's most nervous members about impeachment.

The calendar of both impeachment votes is another factor.

The House's Clinton impeachment votes came a month after congressional elections, giving incumbents two years — a lifetime in politics — until they next faced voters.

This year's Trump impeachment votes will come as the 2020 primary season is about to begin, putting recalcitrant Republicans at risk of facing Trump-backed primary challengers.