The protest came as Washington pointed fingers at Iranian proxy groups for a recent spate of rocket attacks against its military bases in Iraq.

The protesters burned American and Israeli flags, as well as cardboard cutouts of U.S. President Donald Trump in Firdous Square, a central plaza that is close to where anti-government demonstrators have been camped out since Oct. 1. 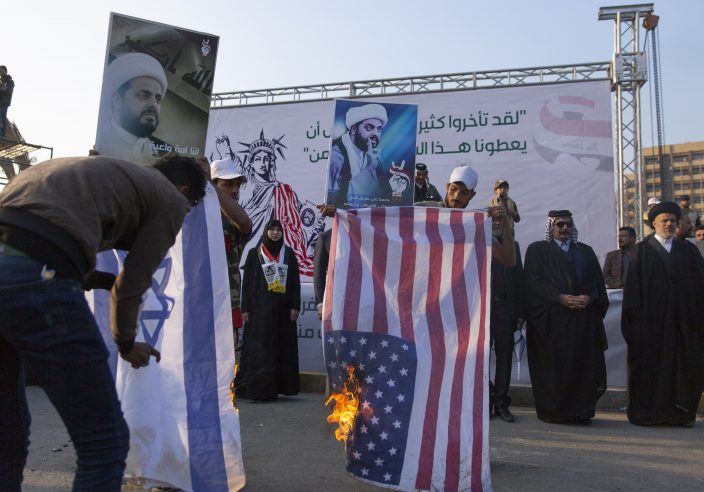 Protesters burn Israeli and US flags while others carry posters with pictures of Qais al-Khazali, during a rally for the Shiite group Asaib Ahl al-Haq, in Baghdad, Iraq, Saturday, Dec. 14, 2019. (AP PhotoNasser Nasser)

The protest came a day after Washington blamed “Iran's proxies” for carrying out several attacks against Iraqi military bases co-located with U.S. soldiers and warned it would take action against future attacks against American interests in Iraq.

An emblem of the U.S. Department of Treasury was placed on the ground so protesters could walk over it, a symbolic rejection of a recent decision by the U.S. to sanction leaders of Asaib al-Haq, a powerful Iran-backed militia group in Iraq accused of being behind deadly sniping attacks on anti-government protesters earlier in October.

On Dec. 6, the U.S. Treasury sanctioned leader Qais al-Khazali, his brother Laith al-Khazali, a commander in the group, and Husain Falih Aziz al-Lami, who allegedly commanded the unit of snipers. 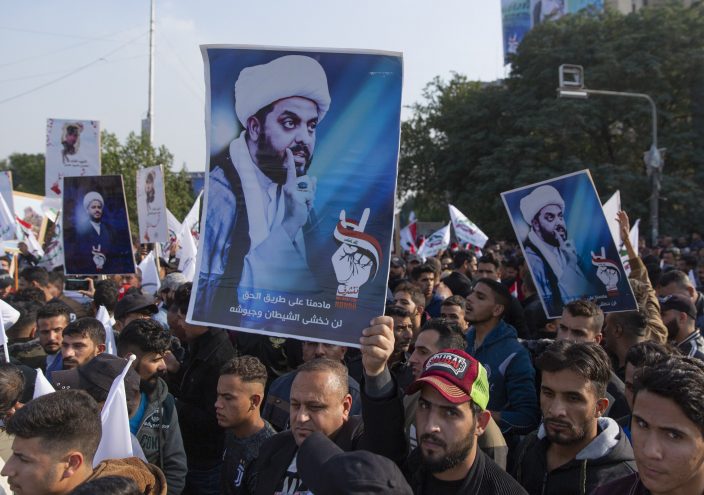 Protesters chant anti US slogans and carry posters with pictures of Qais al-Khazali and Arabic that reads "as long as we are on the track of the righteous, we will not be intimidated by the devil and it's armies," during a rally for the Shiite group Asaib Ahl al-Haq, in Baghdad, Iraq, Saturday, Dec. 14, 2019. (AP PhotoNasser Nasser)

“Today’s demonstration is clear in its aim and message: It is to reject foreign intervention in Iraq's internal decisions," said Naim al-Aboudi, a lawmaker. “In addition to that, it is to reject the decision of the United States of America regarding popular leaders and on top of them is sheikh Qais al-Khazali. Therefore, all these people are here to rise up and condemn these decisions.”

Secretary of State Mike Pompeo blamed Iranian proxy groups in Iraq for instigating a spate of rocket attacks targeting military bases with U.S. personnel. In a Dec. 13 statement, he warned that Washington would take “decisive" action in future attacks on American interests in the country. 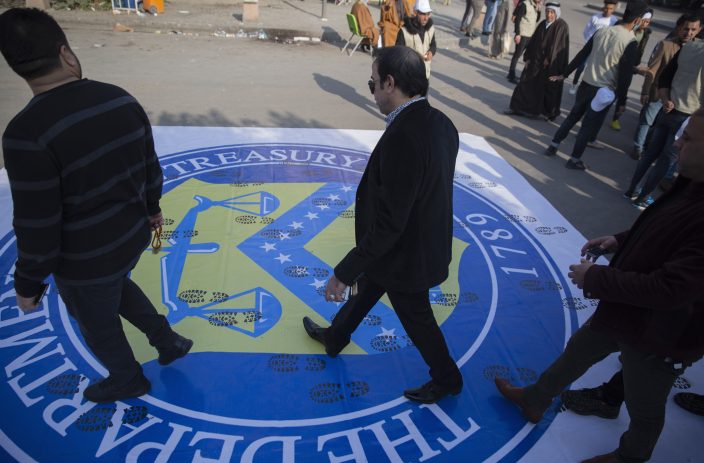 Iraqi protesters walk over a big poster with the logo of the US Department Of The Treasury, that was spread on the street by the organizers to show disrespect, during a rally for the Shiite group Asaib Ahl al-Haq, in Baghdad, Iraq, Saturday, Dec. 14, 2019. (AP PhotoNasser Nasser)

“We must also use this opportunity to remind Iran’s leaders that any attacks by them, or their proxies of any identity, that harm Americans, our allies, or our interests will be answered with a decisive U.S. response," Pompeo said in the statement. “Iran must respect the sovereignty of its neighbors and immediately cease its provision of lethal aid and support to third parties in Iraq and throughout the region.”

On Dec. 9, four Katyusha rockets hit a military base near Baghdad International Airport, wounding at least six Iraqi soldiers, Iraqi security officials said. The area targeted by the rockets is frequented by military advisers from the U.S.-led coalition. On Dec. 3, five rockets landed inside the Ain al-Asad airbase, a sprawling complex in the western Anbar desert that hosts U.S. forces, without causing any casualties and little damage. 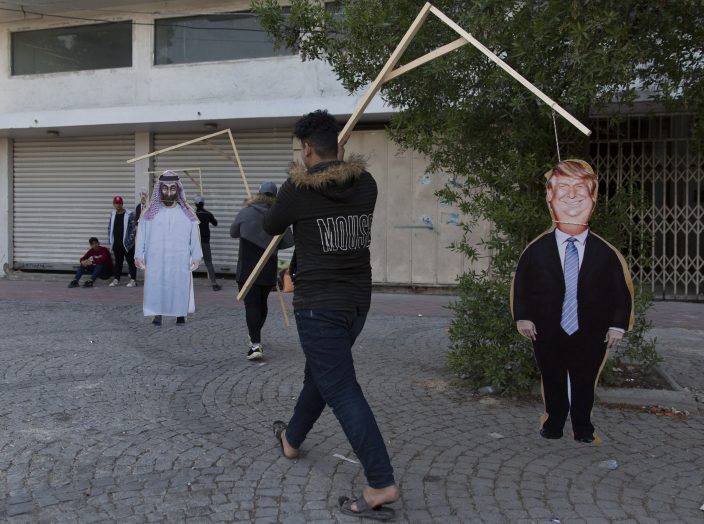 Activists carry cardboard cutouts that depicts US President Donald Trump that is hung to a gallows, during a rally for the Shiite group Asaib Ahl al-Haq, in Baghdad, Iraq, Saturday, Dec. 14, 2019. (AP PhotoNasser Nasser)

Kobe Bryant authored some of his m ...