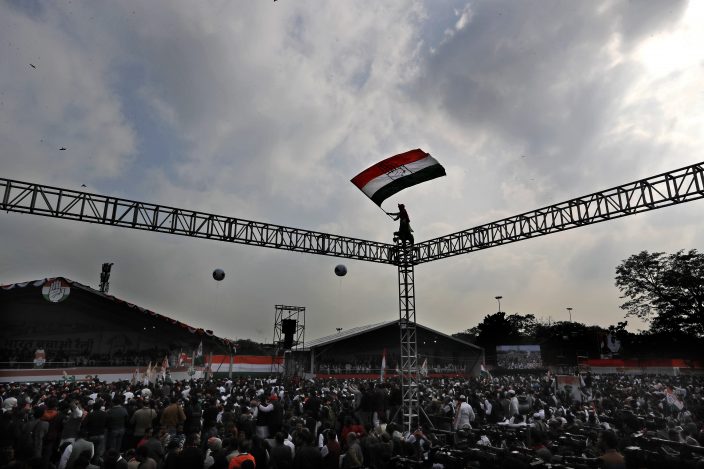 CHINA CABLES-DESTROYING DOCUMENTS — People in touch with state employees in China say the government in the far west region of Xinjiang is destroying documents and taking other steps to tighten control on information. The moves follow leaks of classified papers on detention camps for Uighurs and other predominantly Muslim minorities. SENT: 890 words, photos. 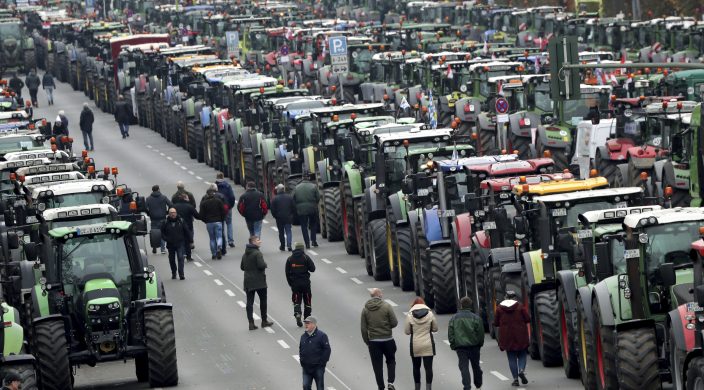 Farmers have parked their tractors on a road between the university and the Brandenburg Gate in Berlin, Germany, Tuesday, Nov. 26, 2019. Some thousands farmers are expected in the German capital for a protest rally against the German and European agriculture policy. (AP PhotoMichael Sohn)

TRUMP-IMPEACHMENT —This coming week’s virtually certain House impeachment of President Donald Trump will underscore how Democrats and Republicans have morphed into fiercely divided camps since lawmakers impeached President Bill Clinton. Each party has far fewer House moderates and Trump's ability to threaten the political careers of Republicans who defy him only exacerbates the divisions. By Alan Fram. SENT: 920 words, photos. 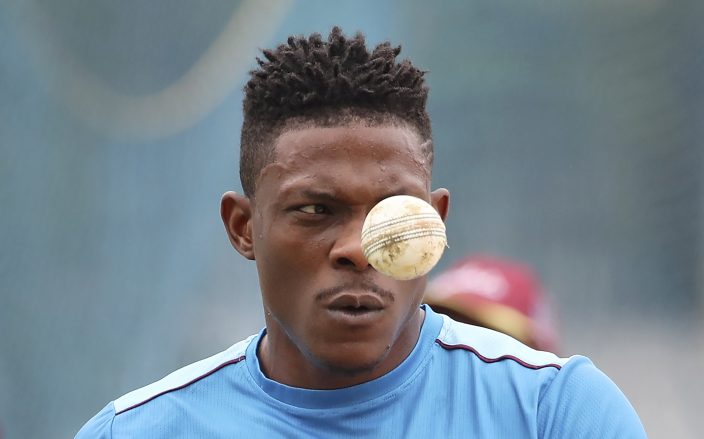 West Indies' Sheldon Cottrell tosses the ball as he prepares to bowl in the nets during a training session ahead of their first one day international cricket match against India, in Chennai, India, Saturday, Dec. 14, 2019. (AP PhotoAijaz Rahi)

TRUMP-IMPEACHMENT-WILD WEEK —President Trump and House Speaker Nancy Pelosi don’t see eye to eye on much these days, but in the throes of impeachment, they’re in lockstep on the desire to close out the year by checking off items on their to-do lists. Lawmakers and White House officials are eager to project the image that they've been focused on anything but impeachment. Even President Donald Trump, no stranger to unpredictability and drama, could only marvel at the week of Washington whiplash. By Zeke Miller. SENT: 850 words, photos.

For full coverage of the impeachment inquiry in AP Newsroom: https://newsroom.ap.org/page/impeachment

YE-ATTACKING WORSHIPPERS —Around the world, deadly attacks on houses of worship took place with relentless frequency in 2019. Hundreds of worshippers were killed in bombings and shootings at churches, mosques, synagogues and temples. By David Crary. SENT: 875 words, photos.

EU--BRITAIN-FRAYING UNION — Leaving the European Union is not the only split British Prime Minister Boris Johnson has to worry about. Johnson’s commanding election victory this week may let him fulfill his campaign promise to “get Brexit done,” but it could also imperil the future of the United Kingdom of England, Scotland, Wales and Northern Ireland. SENT: 950 words, photos. WITH: BRITAIN-BREXIT-ELECTION — British Prime Minister Boris Johnson pledged to repay the trust of voters in the working-class hearland of northern England. SENT: 630 words, photos.

COLLEGES-SLAVERY REPARATIONS — The promise of reparations to atone for historical ties to slavery is new territory in a reckoning at U.S. colleges. Until now, schools have responded with monuments, building name changes and public apologies. Georgetown University and two theological seminaries have announced funding commitments to benefit descendants of the enslaved people who were sold or toiled to benefit the institutions. The actions show ways that colleges are looking to make amends as they confront modern issues of equality and historical entanglements. At least 56 universities have joined a University of Virginia-led consortium to explore their ties to slavery and share research and strategies. By Carolyn Thompson. SENT: 920 words, photos. Eds: This story has moved as the Sunday Spotlight.

SCI-FOOT STANDARD-CHANGING— Change is afoot for the official measuring stick used to size up big places in America. The reason? There are actually two different definitions of the 12-inch measurement known as a foot. Some land surveyors use what’s known as the U.S. survey foot. Others use the definition that’s more accepted by the broader world: the international foot. By Seth Borenstein. SENT: 690 words, photos.

THREE CONFESSIONS — Police in Georgia say a man apparently felt so bad about breaking the law that he called them three times to confess. SENT: 175 words.

TV REPORTER-SEXUAL BATTERY — A Georgia man who was videotaped slapping a female reporter's rear on live TV has been arrested on a misdemeanor charge of sexual battery. SENT: 350 words.

BOW AND ARROW ATTACK-SENTENCE — A judge sentences a Minnesota man to 15 years and nine months in prison for using a bow and arrows to attack sheriff's deputies, injuring one. SENT: 115 words.

ODD-OLD FRUITCAKE — A Michigan family has been passing down a 141-year-old homemade fruitcake as a family heirloom. The cake was originally preserved to honor Fidelia Ford, who baked the cake in 1878. SENT: 300 words, photos.

ELECTION 2020-HEALTH CARE-IOWA —Railing against the insurance industry can score points with progressives for the Democratic presidential candidates. But in Iowa, where nearly 17,000 people are either directly employed by health insurers or work in related jobs, it also can be an easy way to lose vote. By Alexandra Jaffe. SENT: 1,040 words, photos.

FACT CHECK-WEEK —As impeachment closes in on him, President Donald Trump offered a highly selective account of the testimony of a damning witness and misrepresented the facts of a phone call at the heart of the constitutional showdown. He branded Democrats crazy for wanting to impeach him after all the things he's done for the country, some of which he didn't actually do. He falsely credited his daughter with creating 14 million jobs when it's not clear she's created any. A sampling of the past week's political rhetoric. By Hope Yen, Christopher Rugaber and Ellen Knickmeyer. SENT: 2,410 words, photos. Find AP Fact Checks at https://apne.ws/2kbx8bd

SUDAN — A court in Sudan has convicted former President Omar al-Bashir of money laundering and corruption, sentencing him to two years in a minimum-security lockup. SENT: 600 words, photo.

LIBYA — Libyan officials say heavy fighting has raged around the capital Tripoli over the past 24 hours. The fighting is between the army of rebel commander Khalifa Hifter and an array of militias loosely allied with the U.N.-supported government based in the city. SENT: 800 words, photo.

JAPAN-CLERGY ABUSE — Harumi Suzuki and Katsumi Takenaka are among a handful of people who have gone public as survivors of Catholic clergy sexual abuse in Japan. They held signs when Pope Francis visited recently, standing where his motorcade passed, but in different spots and days. But they are starting to feel less alone. SENT: 1,400 words, photos.

SHOOTING JERSEY CITY-GUNS — Officials from states with strong gun restrictions have called for stricter firearm control in places with weaker laws to thwart traffickers, but the fatal attack on a Jewish market in New Jersey shows how fruitless those efforts can be. Three civilians and a police officer were gunned down by two killers with anti-Semitic and anti-law enforcement beliefs, the state's attorney general said. By Mike Catalini. SENT: 585 word, photos.

ABORTION-MISSISSIPPI — Mississippi's outgoing governor vowed to ask the U.S. Supreme Court to uphold Mississippi's ban on abortion at 15 weeks. "We will sustain our efforts to fight for America’s unborn children," Republican Phil Bryant wrote on Twitter. “Mississippi will continue this mission to the United States Supreme Court.” SENT: 630 words.

ALLIGATOR BAN-LAWSUIT — Louisiana is suing the state of California over its decision to ban the import and sale of alligator products, saying the ban will hurt an important Louisiana industry and ultimately could hurt the state's wetlands. SENT: 350 words, photos.

CLIMATE TALKS — Chilean officials presiding over this year's U.N. climate talks said Saturday they plan to propose a compromise to bridge yawning differences among countries that have been deadlocked on key issues for the past two weeks. SENT: 730 words, photos.

CHINA-US-TRADE — China expressed cautious optimism about a first-step trade agreement that dials down a trade war it blames the U.S. for starting. SENT: 470 words, photo.

FBC--T25-ARMY-NAVY — The Army-Navy game is played for the 120th time, with the Black Knights trying to redeem a rough season by beating the No. 21 Midshipmen for a fourth consecutive victory in the series. President Donald Trump, awaiting an impeachment vote, is expected to attend for the second straight year. By Dan Gelston. UPCOMING: 750 words, photos. Game starts 3 p.m. With TRUMP — For the second year in a row, President Donald Trump is set to attend the annual Army-Navy football game (sent, will be updated).

GLF--PRESIDENTS CUP —The International leads 10-8 as it goes for its first Presidents Cup victory since 1998. Tiger Woods, the U.S. playing captain, is in the first of 12 singles matches. By Golf Writer Doug Ferguson. UPCOMING: 600 words, photos by 11:30 p.m.