President Donald Trump used his appearance at the annual Army-Navy football game to pitch to the players an administration policy change that clears the way for athletes at the nation's military academies to play professional sports after they graduate and delay their active-duty service.

To cheers in each locker room before the 120th playing of the game, he said he was giving those athletes with pro potential the chance ``to make a fortune and after you're all finished with your professional career, you'll go and you'll serve and everybody's thrilled.''

Turning to Army's coach, Jeff Monken, the president joked, ``It probably gives the coach no reason to ever lose another game.'' 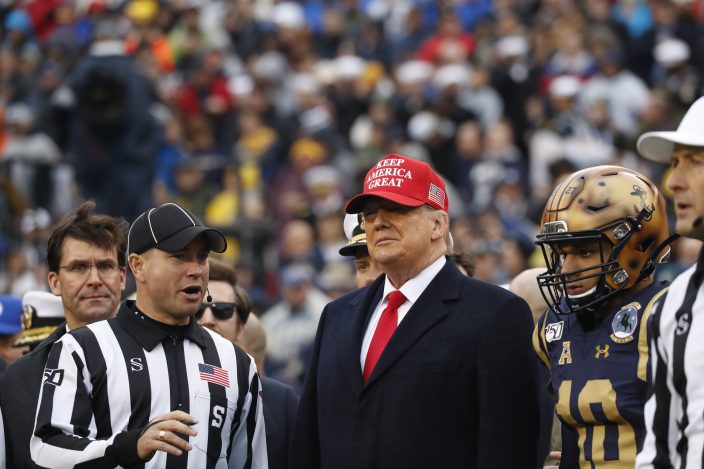 A memo signed in November by Defense Secretary Mark Esper spelled out the new guidelines. It said the athletes must get approval from the Pentagon chief and it requires them to eventually fulfill their military obligation or repay the costs of their education. The Obama administration put a policy in place allowing some athletes to go to the pros and defer their military service.

In the Navy locker room, he congratulated the favored Midshipmen on ``a hell of a season,'' but added, ``You know, it's only a great season, you know it has to happen today, otherwise you wouldn't call it a great season. So you better go out there and play hard.''

With impeachment looming in Washington, Trump made the day trip to Philadelphia for the second year in a row for the storied game. Trump, who also went in 2016 as president-elect, is the 10th commander in chief to attend the contest. 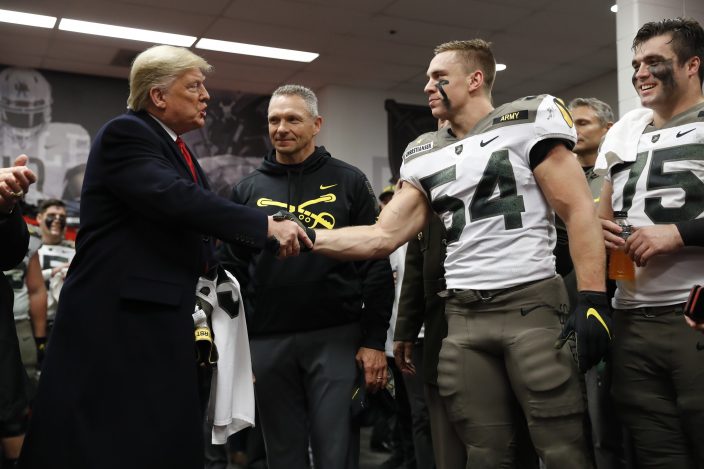 In 2016, Army snapped Navy’s 14-game winning streak and has won three years in a row. But the Midshipmen entered Saturday’s game as a significant favorite. At 9-2, they ranked 23rd in the nation while Army’s Black Knights had a 5-7 record.

Trump was accompanied by Esper and the chairman of the Joint Chiefs of Staff, Gen. Mark Milley. The president was on the field for the coin toss and planned to switch sides at halftime.

The crowd cheered as Trump walked off the field after the national anthem. He put on a Keep America Great hat. 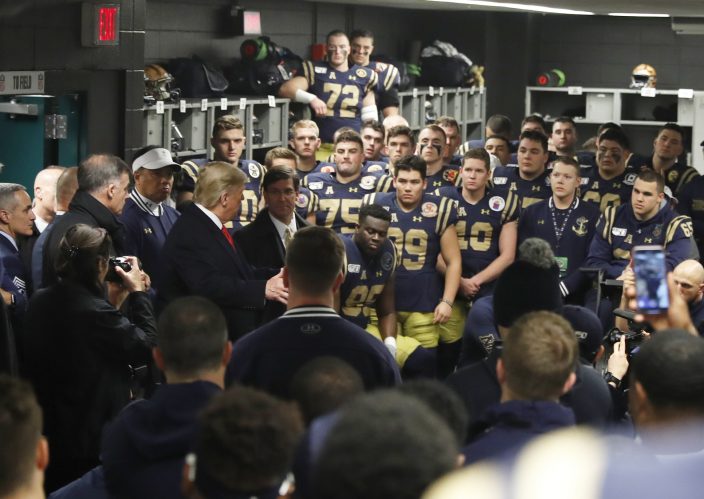 Trump has closely linked himself to the military, promoting increases in defense spending and overseas triumphs such as the October killing of Islamic State leader Abu Bakr al-Baghdadi in Syria.

The game comes amid a renewed push by the White House to deliver moments that depict Trump governing — such as his visit to NATO in London last week and his successful lobbying for a new U.S.-Canada-Mexico trade deal — that it believes stands in stark contrast to the Democrats’ impeachment effort.

In the coming week, Trump is expected to become the third president impeached after the House votes on charges of abuse of power and obstruction of Congress. 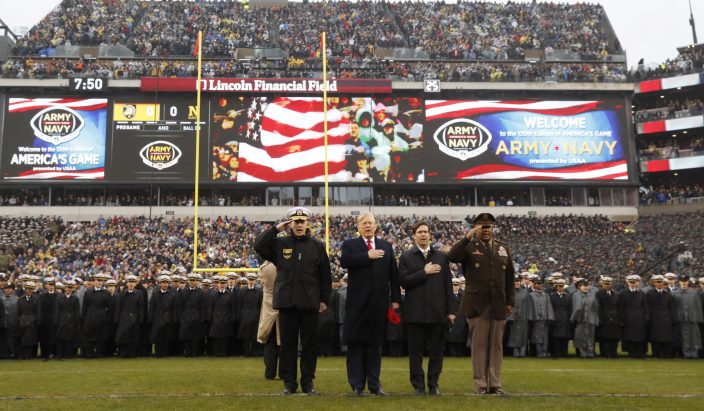 President Donald Trump stands for the Pledge of Allegiance before the start of the Army-Navy college football game in Philadelphia, Saturday, Dec. 14, 2019. (AP PhotoJacquelyn Martin)

Trump also has drawn the ire of many in the Pentagon. He has clashed with military leadership on a number of fronts, including on pushes to withdraw some U.S. forces from the Middle East and the Korean Peninsula as well as his at times lackluster support for military alliances such as NATO. His first defense secretary, James Mattis, resigned last year over Trump’s decision to pull troops out from Syria.

Last month, Navy Secretary Richard Spencer was fired amid tensions between the Pentagon and the White House after Trump intervened to reverse sentences against three service members accused of committing war crimes.

Trump ignored Pentagon leaders who had told him such a move could damage the integrity of the military judicial system, the ability of military commanders to ensure good order and discipline, and the confidence of U.S. allies and partners who host U.S. troops. 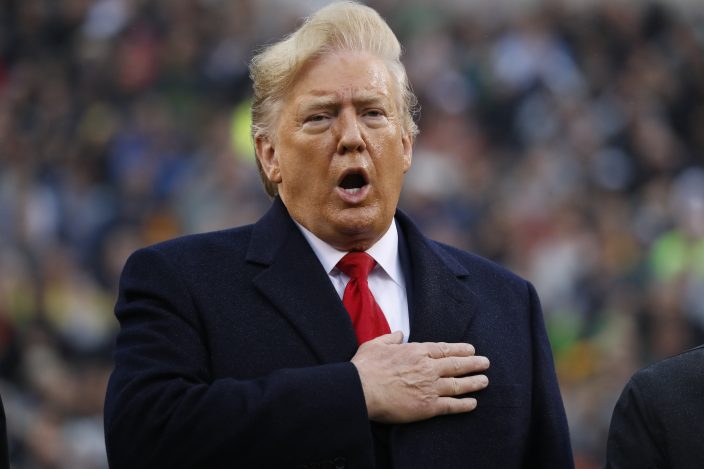 President Donald Trump holds his hand over his heart for the Pledge of Allegiance before the start of the Army-Navy college football game in Philadelphia, Saturday, Dec. 14, 2019. (AP PhotoJacquelyn Martin)

Among the other presidents to attend the Army-Navy game are Barack Obama, George W. Bush, Gerald Ford and John F. Kennedy.

Iran uses violence, politics to try to push US out of I ...

Iran has long sought the withdrawa ...

Trump heads to Switzerland with Senate trial to reconvene

Trump to promote trade deals in Sunday speech to US farmers