Tiger Woods set the Presidents Cup record for most victories and set the tone for his U.S. team Sunday at Royal Melbourne.

Woods seized control around the turn against Abraham Ancer and won, 3 and 2, in the first of 12 singles matches. The Americans need to win singles for the first time in 10 years to overcome a two-point deficit against the International team.

Woods went 3-0 for the week as the first playing captain since Hale Irwin at the inaugural Presidents Cup in 1994. His singles victory was his 27th in nine appearances, breaking the record Phil Mickelson had set in 12 events. 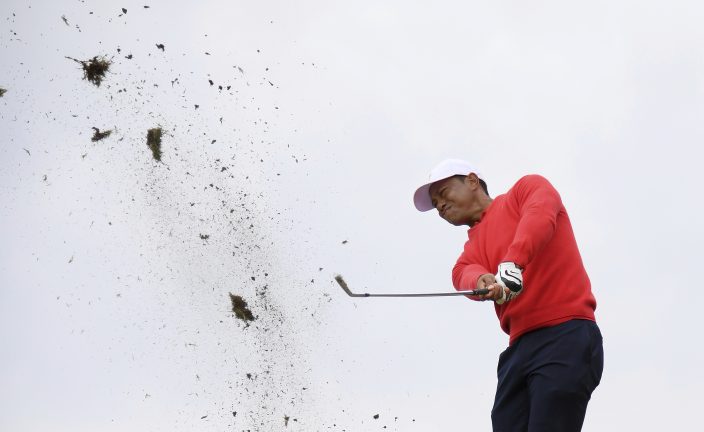 The idea was to get American red on the board quickly, and Woods did his part. The rest of the team was following the script, building early leads in five other matches.

The Internationals were trying to win for the second time. Their only other victory was at Royal Melbourne in 1998.

Ancer, one of seven rookies on the International team, three times answered when Woods the lead. Woods, however, took over with a par on No. 9 and a birdie on the 10th. Ancer was still only 1 down through 13 holes when he three-putted from long range for bogey on the 14th.

Woods closed him out with a 20-foot birdie on the 16th hole, turning to remove his cap and shake hands with Ancer before the ball dropped into the cup.

US team in foreign territory _ trailing _ at Presidents Cup

Patrick Reed still the talk of the Presidents Cup

Schauffele making a name for himself with his golf