Norman Powell fouled out with 25 points and Kyle Lowry had 17 to help the Raptors win their ninth straight home game against the Nets and beat Brooklyn for the 16th time in 17 meetings.

Serge Ibaka had 12 points and 12 rebounds as Toronto extended an NBA record by winning its 34th straight at home against a division foe. The Raptors are unbeaten at home against Atlantic Division opponents since a Nov. 10, 2015, loss to the New York Knicks. 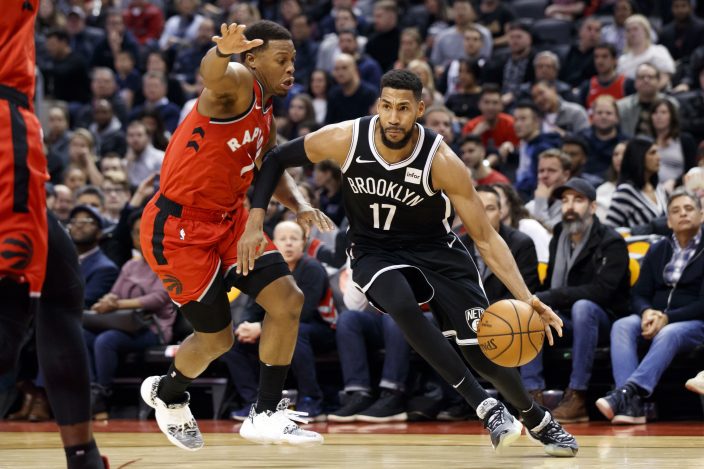 The Raptors made nine of 12 attempts from 3-point range in the first quarter, including their first seven straight. The hot shooting didn’t last, and Toronto went 5 for 28 from distance the rest of the way.

Toronto came in having made 27.2% of its 3-point attempts in its previous five games, four of them losses. The Raptors made a season-low seven 3-pointers Monday night in a 93-92 win at Chicago.

Wednesday’s home loss to former teammate Kawhi Leonard and the Clippers was Toronto’s third straight at home after a franchise-record nine consecutive home wins to begin the season. The Raptors hadn’t lost three straight at home since Nov. 29 to Dec. 5, 2015. 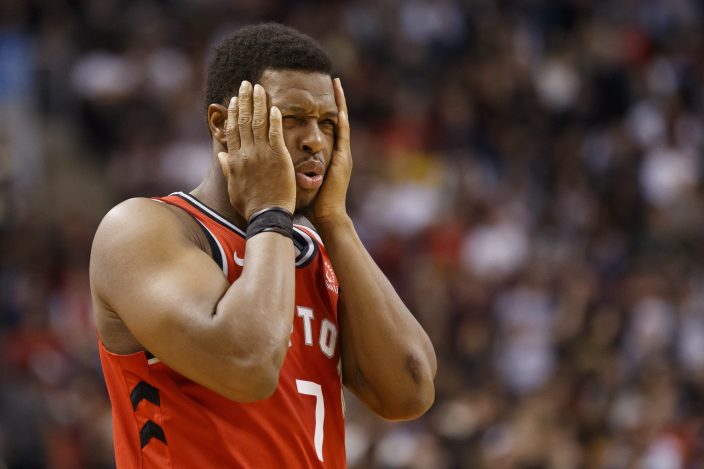 Toronto Raptors guard Kyle Lowry (7) reacts during the first half of an NBA basketball game against the Brooklyn Nets in Toronto, Saturday, Dec. 14, 2019. (Cole BurstonThe Canadian Press via AP)

Siakam topped 25 points for the first time in six games. Toronto lost four of the five games in which Siakam failed to score at least 25.

Spencer Dinwiddie scored 26 points, Garrett Temple added 16 and Taurean Prince had 14 points and 10 rebounds for the Nets, who are 0-4 on the road against opponents with winning records.

Brooklyn, which led by 10 points early, couldn’t hold a double-digit lead for the second straight game. The Nets saw a 20-point lead slip away in Wednesday’s 113-108 home loss to Charlotte. 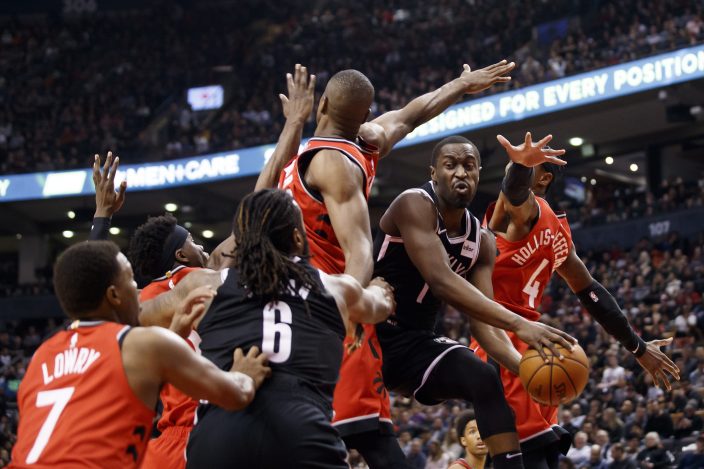 Brooklyn Nets guard Theo Pinson (1) looks to pass as he drives to the hoop against the Toronto Raptors during the first half of an NBA basketball game in Toronto, Saturday, Dec. 14, 2019. (Cole BurstonThe Canadian Press via AP)

Temple couldn’t convert a three-point play after making a layup to begin the fourth, and Powell scored five points as Toronto replied with a 9-0 run, taking a 99-85 lead with 8:32 left to play.

Siakam was the first Raptors player to miss a 3, coming up empty on a shot with 4:46 to go in the opening quarter. Nine of Toronto’s 12 field goals in the first were 3-pointers, one shy of the team record for a single quarter. Siakam had 14 points in the first as the Raptors overcame an early 12-2 deficit to lead 38-31 after one.

Toronto made just two of 12 attempts from deep in the second, but Siakam scored 11 points as the Raptors led 65-60 at the half.

Toronto continued to struggle from distance in the third, making two of eight attempts, but Powell scored nine points and Gasol had seven points and six rebounds. The Raptors led 90-83 through three quarters.

Nets: Jarrett Allen had 10 rebounds, extending his career-best streak of 10-plus rebound games to 10. It’s the longest streak by a Nets player since Reggie Evans did it in 18 straight in 2012-13. … Brooklyn made 20 turnovers, leading to 29 points for Toronto. … The Nets are 3-7 against opponents with winning records.

'África's Richest Woman' out of Davos we ...