Bryan Rust scored twice in regulation and got the lone goal in the shootout, and the Pittsburgh Penguins defeated the Los Angeles Kings 5-4 on Saturday night.

Rust faked a shot on the forehand and flipped a blocker-side backhander past Kings goaltender Jonathan Quick for the deciding goal. The Kings had a chance to continue the shootout, but the puck rolled off Adrian Kempe’s stick, giving the Penguins their fifth win in six games.

Rust, who scored the overtime winner Thursday against Columbus, had a 5-on-3 power-play goal in the second period. Teddy Blueger and Jack Johnson scored third-period goals, while Jake Guentzel and Kris Letang both had three assists. Pittsburgh has points in 17 of its last 22 games, including 13 wins. 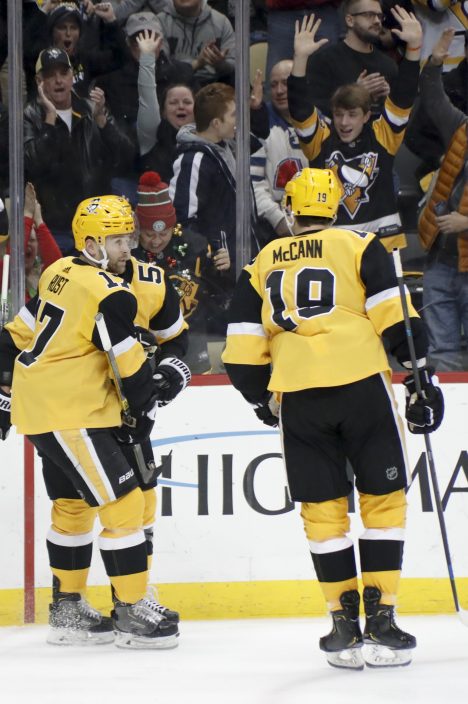 Fans and teammates celebrate with Pittsburgh Penguins' Bryan Rust, left, after he scored his first goal of the second period against the Los Angeles Kings in an NHL hockey game, Saturday, Dec. 14, 2019, in Pittsburgh. (AP PhotoKeith Srakocic)

Tristan Jarry, who entered the game with three shutouts in his last four appearances, made 38 saves for Pittsburgh.

Five of the last eight games between Pittsburgh and Los Angeles have needed overtime. 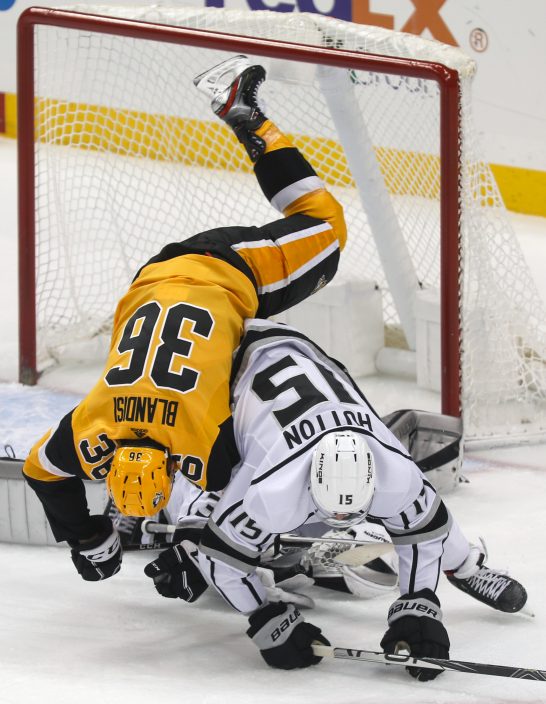 Blueger put Pittsburgh ahead 3-2 at 9:26 of the third period. Johnson gave Pittsburgh a two-goal lead 29 seconds after Jarry stopped Anze Kopitar on a breakaway, and then a penalty shot.

But the Kings tied the game with two late goals.

Clifford converted a rebound with 5 minutes left and Amadio scored 1:23 later after a net-mouth scramble in front of Jarry. 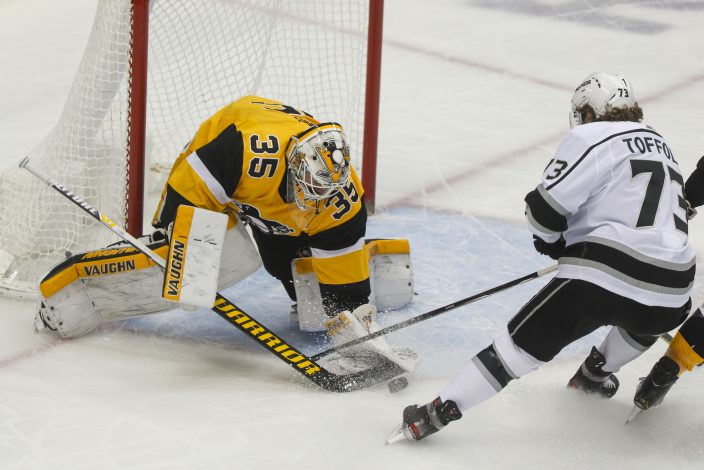 The Penguins played their second straight game without three of their top four centers.

Evgeni Malkin skated on his own Saturday morning, but he missed his second straight game with an illness. He’s one goal from becoming the fourth in franchise history and eighth active in the NHL to score 400 goals. Captain Sidney Crosby and center Nick Bjugstad have been out since November because of core muscle surgery. Pittsburgh is also without top defenseman Brian Dumoulin and forward Patric Hornqvist, who both missed their sixth straight games with lower-body injuries.

The Penguins have won 16 of their last 22 in the regular season without Crosby and Malkin, including eight of the last 10 at home. The Kings are in a stretch in which they play 12 of 16 games on the road, including their current season-long six-game trip.

Los Angeles ended an 11-game road winless streak with a win at Anaheim on Thursday. Before Thursday, the Kings were 0-10-1 on the road since a win against Winnipeg on Oct. 22.

Los Angeles plays 11 road games among its 15 total this month. 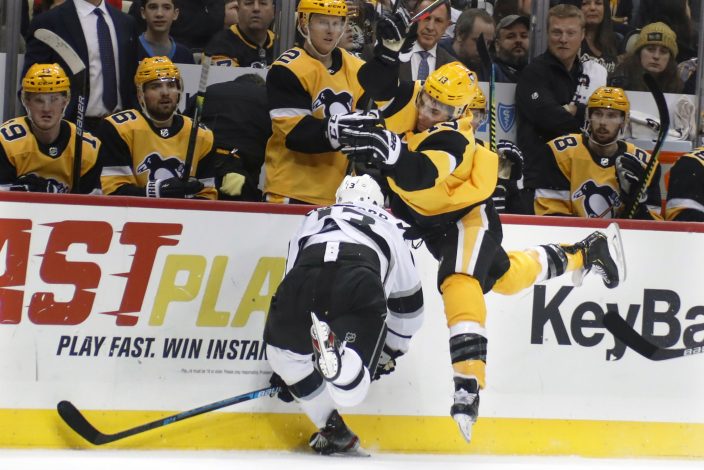 NOTES: Pittsburgh scored its first 5-on-3 power-play goal since Nov. 25, 2017. ... Rust has seven goals and 15 points in his last 11 games. ... Guentzel has nine goals and 22 points in his last 14 games. ... Toffoli and Rust both continued three-game point streaks. Guentzel is on a five-game point streak. ... Kings F Ilya Kovalchuk was scratched for the 17th straight game. ... Pittsburgh has 14 wins in its last 16 home games. ... Penguins F Joseph Blandisi was recalled on an emergency basis from Wilkes-Barre/Scranton of the American Hockey League for the second time in three days.

Southampton beats Palace 2-0, climbs into top half of E ...