This year's U.N. climate negotiations in Madrid, the longest in 25 nearly annual such gatherings, ended Sunday with major polluters resisting calls to ramp up efforts to keep global warming at bay.

Faced with the tough task of reconciling the demands of scientists, protesters on the streets and governments back home, the negotiators ended up disappointing many and leaving for next year's talks in Glasgow, Scotland, key issues such as the regulation of global carbon markets.

Here is a look at the main issues resolved, and the sticking points for future negotiations. 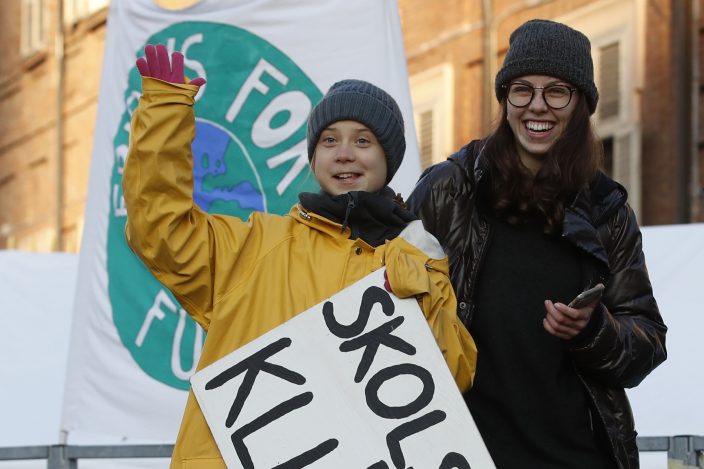 Swedish environmental activist Greta Thunberg holds a sign with writing reading in Swedish "School strike for the climate" as she attends a climate march, in Turin, Italy, Friday. Dec. 13, 2019. Thunberg was named this week Time's Person of the Year, despite becoming the figurehead of a global youth movement pressing governments for faster action on climate change. in Turin, Italy, Friday, Dec. 13, 2019. (AP PhotoAntonio Calanni)

While it wasn't officially on the agenda, most participants and observers agreed that the U.N. talks needed to send a strong signal that countries were willing to set bolder targets for cutting greenhouse gas emissions.

That was far more ambitious than the goal ultimately set by the so-called “Chile-Madrid Time for Action” declaration, which merely calls for the “urgent need” to cut planet-heating greenhouse gases in line with the goals of the landmark 2015 Paris climate accord.

A woman looks at a World globe at the COP25 climate talks congress in Madrid, Spain, Friday, Dec. 13, 2019. Officials from almost 200 countries are scrambling to reach an agreement at a United Nations climate meeting amid growing concerns that key issues may be postponed for another year. (AP PhotoPaul White)

Scientists say global emissions of carbon dioxide and other pollutants have to start falling rapidly as soon as possible to meet the Paris goal of keeping global warming by the end of the century well bellow 2 degrees Celsius (3.6 Fahrenheit), and ideally 1.5 degrees Celsius (2.7 F).

That accord allowed countries to set their own emissions-reduction targets — known as nationally determined contributions, or NDCs — which would be regularly reviewed and increased if necessary. With current emissions targets putting the world on course for a 3- to 4-degree Celsius temperature rise by 2100, scientists say sharper cuts are necessary and should be announced in advance of next year's climate conference in Glasgow. A Greenpeace activist displays a banner reading 'Our politics are pulled' outside the COP25 climate talks congress in Madrid, Spain, Friday, Dec. 13, 2019. The United Nations Secretary-General has warned that failure to tackle global warming could result in economic disaster. (AP PhotoPaul White)

“Achieving this is possible — with existing technologies and within our current economy,” said the revered climate scientist. "The window of opportunity is open, but barely.”

HOW TO REGULATE GLOBAL CARBON MARKETS?

Economists say market mechanisms can speed up the shift from fossil fuels to renewable energy sources. One way to do this is by putting a price on carbon dioxide, the most abundant man-made greenhouse gas, and gradually reducing the amount countries and companies are allowed to emit. A Greenpeace activist displays a banner reading 'The climate is not a business' outside the COP25 climate talks congress in Madrid, Spain, Friday, Dec. 13, 2019. The United Nations Secretary-General has warned that failure to tackle global warming could result in economic disaster. (AP PhotoPaul White)

The European Union and some other jurisdictions around the world already have limited emissions trading systems for buying and selling carbon credits.

The Paris accord was meant to establish the rules for carbon trading on a global scale.

But setting the rules for a robust and environmentally sound market and linking up existing systems is difficult. So, too, is the question of allocating a percentage of the revenue to help countries adapt to the effects of warming temperatures. A man looks up as police and fire personnel move in to remove climate activists after they climbed the Europa building during a demonstration outside an EU summit meeting in Brussels, Thursday, Dec. 12, 2019. Greenpeace activists on Thursday scaled the European Union's new headquarters, unfurling a huge banner warning of a climate emergency hours before the bloc's leaders gather for a summit focused on plans to combat global warming.(AP PhotoFrancisco Seco)

The main point of resistance lies in the existence of old carbon credits left over from a now-discredited system established under the 1997 Kyoto Protocol. Developing countries such as Brazil insisted during the past two weeks in Madrid on keeping those emissions credits, while also resisting strict accounting of future trades.

The argument that carbon markets that are not transparent enough and leave loopholes for double counting can undermine efforts to reduce emissions won at the end, postponing the decision on the issue for Glasgow.

AID FOR THE POOR

Demonstrators scuffle with UN security staff members during a protest at the COP25 summit in Madrid, Wednesday Dec. 11, 2019. World leaders agreed in Paris four years ago to keep global warming below 2 degrees Celsius (3.6 degrees Fahrenheit), ideally no more than 1.5 C (2.7 F) by the end of the century. Scientists say countries will miss both of those goals by a wide margin unless drastic steps are taken to begin cutting greenhouse gas emissions next year. Claiming that the message doesn't seem to be getting through to governments, over one hundred activists led by representatives of indigenous peoples from Latin and North America made their way to the talks' venue, blocking for some tense minutes the entrance to a plenary meeting where U.N. Secretary General António Guterres was about to speak. (AP PhotoBernat Armangue)

In summit lingo the issue is known as “loss and damage." In essence, it was recognized several years ago that developing nations are much more vulnerable to the negative effects of climate change, even though they contribute least to the problem.

A tentative agreement was reached in 2013 that rich countries would help them foot the bill.

But attributing specific weather disasters such as hurricanes and floods, or slow but irreversible changes like sea level rise and desertification, to climate change remains a delicate issue given the potential costs involved. FILE - In this Nov. 28, 2019 file photo, a coal storage facility is seen in Hejin in central China's Shanxi Province. Scientists say emissions worldwide need to start falling sharply from next year if there is to be any hope of achieving the Paris climate accord’s goal of capping global warming at 1.5 degrees Celsius (2.7 Fahrenheit). (AP PhotoSam McNeil, File)

The United States, in particular, had opposed any references to possible liability in the summit's conclusions, and scored a victory when a decision on it was also postponed for another year.

Developing countries also demand that compensation be kept a separate issue from funds to help the countries adapt and mitigate the effects of a warming planet. The Green Climate Fund, which was established to that end, is currently far from reaching the target of $100 billion a year in contributions.

HEAT ON THE STREET

FILE - In this March 19, 2019 file photo, the blades of wind turbines catch the breeze at the Saddleback Ridge wind farm in Carthage, Maine. Scientists say emissions worldwide need to start falling sharply from next year if there is to be any hope of achieving the Paris climate accord’s goal of capping global warming at 1.5 degrees Celsius (2.7 Fahrenheit). (AP PhotoRobert F. Bukaty, File)

Chile, which chaired the conference, chose to give it the slogan “Time for Action."

That echoed the blunt demands from protesters, who have been staging mass rallies around the world for the past year demanding leaders take what they call the “climate emergency” seriously.

European Union countries responded to public pressure this week by agreeing to a long-term goal of cutting the bloc's greenhouse gas emissions to net zero, meaning any that remain will be offset with carbon reduction measures.

Some observers and EU ministers had hoped this signal from Brussels would boost the talks in Madrid. If anything, it revealed the vast gap between what countries can agree at the regional level and what the U.N. process is capable of.

Australia works to recover bodies of 3 from air tanker ...

The American tanker plane that cra ...

Trump, a late convert to cause, to join anti-abortion r ...

It was just four years ago that a ...