Borussia Mönchengladbach is no longer top of the Bundesliga.

It conceded a late goal for the second successive game to lose 2-1 at Wolfsburg on Sunday. 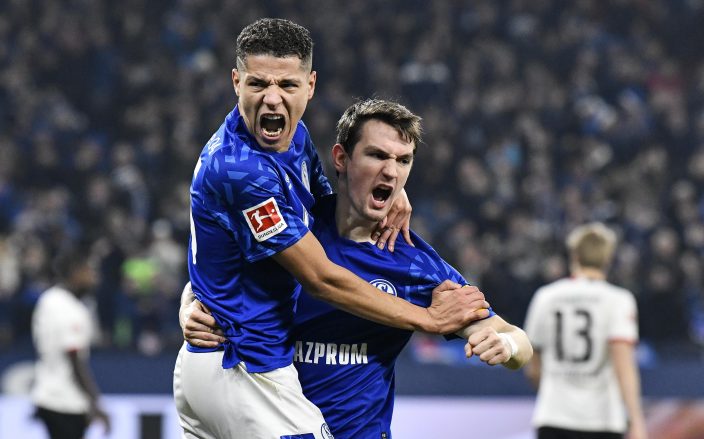 Leipzig moved top after 15 rounds on 33 points on Saturday with a 3-0 win at Fortuna Düsseldorf, the visitors' sixth consecutive win.

Gladbach had been leading since the seventh round and fueled talk of a title challenge with its 2-1 win over Bayern Munich last weekend, but Marco Rose's side has endured a frustrating week after its Europa League exit on Thursday.

Gladbach's European campaign ended in a 2-1 defeat at home to Istanbul Basaksehir, which scored in injury time to progress at the German side's expense.

Wolfsburg showed more initiative from the start and took a 15th-minute lead when Jerome Roussillon played the ball through Gladbach defender Stefan Lainer's legs, then cut it back for Xaver Schlager to rifle past Yann Sommer.

Alassane Plea produced a deep cross for the incoming Breel Embolo to volley in the equalizer within a minute, but Arnold's late strike left the visitors empty handed after a hard-fought game.

Schalke captain Alexander Nübel was sent off for a high dangerous challenge on Eintracht Frankfurt's Mijat Gacinovic but his side managed to hold on for a 1-0 win.

Nübel charged out of goal and leaped up to knock Gacinovic over, leaving the Frankfurt midfielder with a bloody mouth in the 66th minute. The Serbian was taken off and taken to the hospital for checks.

Schalke midfielder Weston McKennie was earlier hospitalized with a suspected dislocated shoulder after landing awkwardly from an aerial duel with Bas Dost. He was taken off the field on a stretcher.

Benito Raman's 53rd-minute strike was enough for the home side to stay fourth.

Bayern beats Hertha 4-0 away to move 2nd in Bundesliga