Nobody can accuse 32-year-old Abid Ali of not seizing his chances when given them.

Pakistan drew its first test at home in 10 years against Sri Lanka at the Pindi Cricket Stadium after rain washed out more than half of the match, but not before Abid had smashed a century on debut. He was batting at the same venue where Pakistan great Younis Khan scored a century on his test debut in 2000 -- also against Sri Lanka.

Abid completed a unique double, becoming the batsman in the history of the sport to score a century in both his ODI and test debuts. 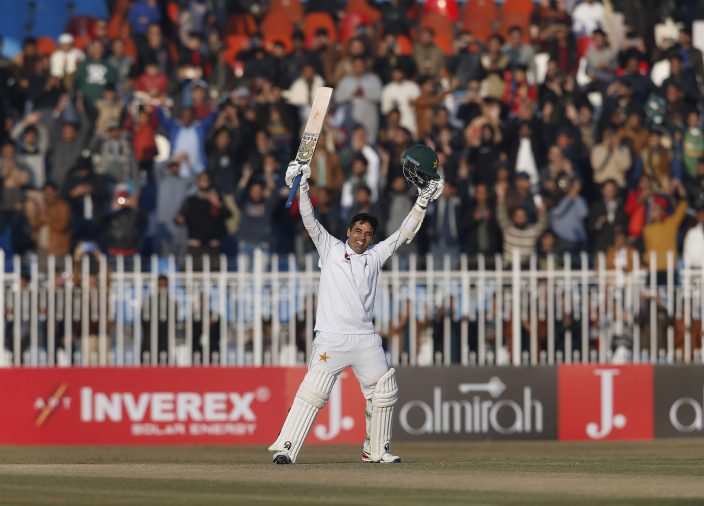 More than 12,000 cricket-starved fans -- popularly known as ‘The Pindi Boys’ -- enjoyed every moment of the opener's innings under bright sunshine. He hit an unbeaten 109, featuring 11 fours. Six of those boundaries were his favorite cut shots.

Abid has long been knocking at the doors of international cricket, but had to wait patiently until he got his chance in March this year during the limited-overs series.

A scintillating ODI century against Australia in the United Arab Emirates was not enough to convince the selectors that he was ready for the all-important World Cup in England. Pakistani batman Babar Azam, right, is congratulated by teammate Amid Ali after completing his century during the fifth-day of the 1st cricket test match between Pakistan and Sri Lanka, in Rawalpindi, Pakistan, Sunday, Dec. 15, 2019. (AP PhotoAnjum Naveed)

But Abid didn’t lose heart and continued to polish his skills at the National Cricket Academy in Lahore. He was among the 16-man squad which toured Australia for the recent two-test series, but couldn’t fit in new coach Misbah-ul-Haq’s plans. Pakistan returned home after heavy losses at Brisbane and Adelaide, where Abid watched from the sidelines.

Abid’s hopes were raised once again when he was selected for the home series against Sri Lanka, but there were still pundits who didn't believe he'd get a chance in Rawalpindi.

“I had never grumbled whenever I was ignored,” Abid said. “I have patience. I believed that my time will come ... Thankfully I got my chance and what else you could ask for than a hundred on debut. I waited a long for this very day and here I am.”

Only 5.2 overs could be bowled on the third day and the entire fourth day was washed out due to wet conditions.

Bright sunshine welcomed players on the last day and Abid seized the opportunity Sunday after Sri Lanka declared its first innings at 308-6 once Dhananjaya de Silva had scored his sixth test hundred.

Abid, now the oldest Pakistani player to score a century on debut, said he didn’t want to be compared with the greats of the game.

“I am an ordinary player and I can’t match great players,” he said. “I am Abid Ali and please see me as Abid Ali only."

But one of those greats has already acknowledged that a star is on the rise in the Pakistan team.