Hundreds of unaccompanied children are living in “inhuman and degrading” conditions in a migrant camp on the Greek island of Lesbos, putting their mental and physical well-being at risk, an international human rights organization said Wednesday.

Human Rights Watch researchers visited the Moria camp in mid-October and interviewed 22 of the 1,061 unaccompanied children who were registered there at the time. The children they interviewed, the youngest of whom were age 14, described having little or no access to care and specialized services.

The camp on the Aegean Sea island has a separate section for minors who arrived without adult guardians. Due to overcrowding, most of the children Human Rights Watch interviewed were living either among Moria's general population or just outside the camp in an olive grove where migrants and refugees have set up their own tents. 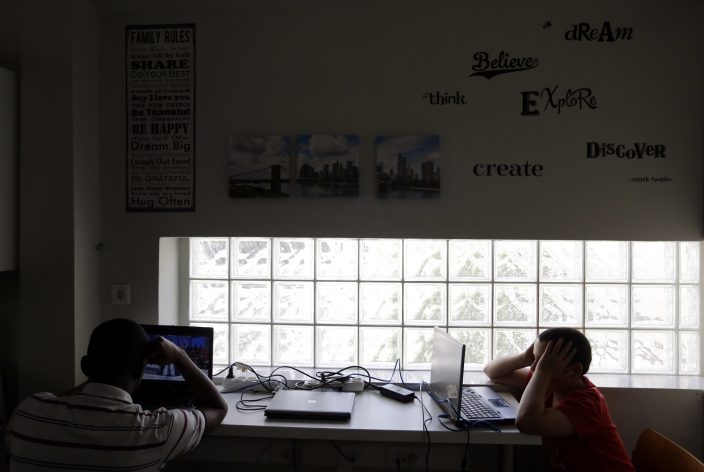 FILE - In this Thursday, May 26, 2016 file photo migrant boys use laptops at a facility housing unaccompanied children in Athens. An international human rights organization says on Wednesday, Dec. 18, 2019, that hundreds of unaccompanied children in a migrant camp on the eastern Aegean island of Lesbos are living in "inhuman and degrading" conditions that threaten their mental and physical wellbeing. (AP PhotoThanassis Stavrakis, File)

“Hundreds of lone children on Lesbos are left to fend for themselves, sleeping on mats and cardboard boxes, exposed to worsening and dangerous weather conditions,” Human Rights Watch quoted its Greece researcher, Eva Cosse, as saying in a statement. “The Greek authorities need to urgently make sure these children are safe and cared for.”

The organization said most of the children interviewed reported suffering from anxiety, depression, insomnia and headaches.

Under a deal between the European Union and Turkey to stop migrant flows into Europe, those who arrive on Greek islands from the nearby Turkish coast are held in island camps pending deportation unless they successfully apply for asylum in Greece. 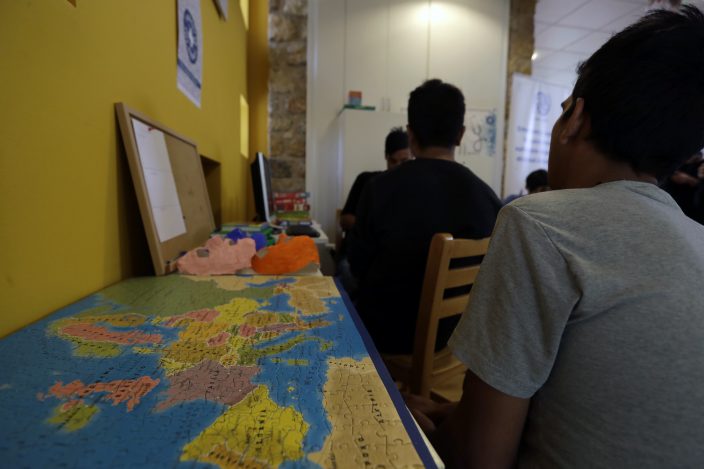 FILE - In this Tuesday, Oct. 11, 2016 file photo migrant children sit near a puzzle, depicting the map of Europe, at a new reception center for unaccompanied minors in Athens. An international human rights organization says on Wednesday, Dec. 18, 2019, that hundreds of unaccompanied children in a migrant camp on the eastern Aegean island of Lesbos are living in "inhuman and degrading" conditions that threaten their mental and physical wellbeing. (AP PhotoThanassis Stavrakis)

Only asylum-seekers considered to be in vulnerable groups are eligible to be moved to facilities on the mainland. Continued arrivals coupled with a backlog in asylum applications has led to dramatic overcrowding of the camps.

The 6-month-old Greek government has vowed to reduce the number of people in island camps by moving about 20,000 to the mainland by early next year, and to improve conditions for unaccompanied minors. But despite the transfer of several thousand from the islands, overcrowding persists, fueled by an increase in new arrivals.

On Lesbos, facilities designed for 2,840 people held 18,358 on Monday — more than six times over capacity, according to the most recent figures from the civil protection ministry. The situation is worse on the island of Samos, where the camp population is 11 times beyond capacity.

Runners still finding release on the road during corona ...