“Hong Kong's prosperity and stability is the wish of Hong Kong compatriots and the expectation for the people of the motherland," Xi said in the televised address. 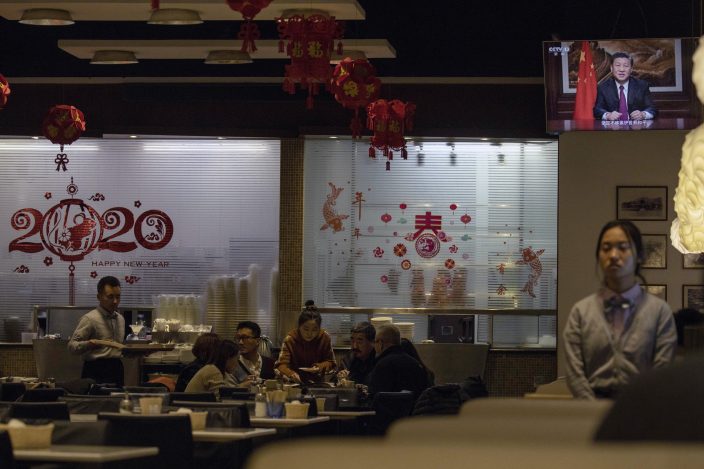 Chinese President Xi Jinping is seen on a televised New Year address on a television screen in a restaurant in Beijing on Tuesday, Dec. 31, 2019. In the New Year's address Tuesday evening, Xi called for Hong Kong to return to stability following months of pro-democracy protests. (AP PhotoNg Han Guan)

The protests broke out in June over proposed legislation that could have extradited suspects in Hong Kong to face trials in mainland China.

Though the legislation was withdrawn, the protests have continued with demands for democratic reforms and an investigation into alleged abuses by police against protesters. The often violent disturbances have sent Hong Kong's economy into recession and tarnished the city's reputation as one of the world's safest.

The former British colony was handed over to Chinese rule in 1997 with a promise it could retain its own capitalist economy, legal system and civil liberties, although many see those as eroding as Beijing tightens its grip.

Xi also reiterated China's rigid opposition to independence for Taiwan, the self-governing island republic that Beijing claims as its own territory. Taiwan holds elections for its president and legislature on Jan. 11, with independence-leaning leader Tsai Ing-wen expected to win a second term.

In his speech, Xi dwelt heavily on economic topics, saying that China's gross domestic product in 2019 was on track to near 100 trillion yuan ($14.37 trillion), while per capita GDP was likely to reach $10,000.

The coming year will be decisive in China's battle to alleviate poverty for rural residents, Xi said. In 2019, around 10 million people were lifted out of poverty, he said.