It’s always been a bit of a lingering question around the Seattle Seahawks when it came to Russell Wilson and the postseason.

If the Seahawks just let Wilson take over in the playoffs, how deep of a run could Seattle make? Is Wilson good enough to carry a solid team and make it championship worthy, like the Legion of Boom defense did en route to the Seahawks' Super Bowl victory following the 2013 season?

This could be the year that gets answered if Seattle’s playoff-opening win over Philadelphia is an indication. With Seattle’s already depleted run game shut down by the Eagles, Wilson and rookie DK Metcalf lifted the Seahawks into the divisional round of the playoffs with their 17-9 victory. 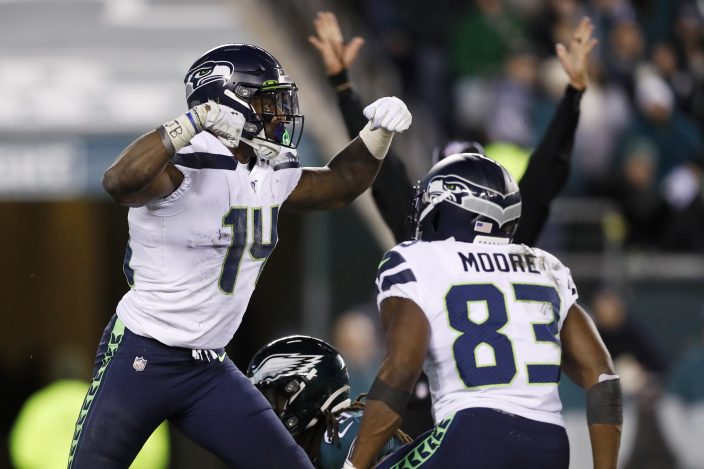 Wilson was tremendous, accounting for 325 yards passing and 45 yards rushing. Metcalf set an NFL postseason rookie record with 160 yards receiving on seven catches and a key 53-yard touchdown in the third quarter.

The reward is a date with Green Bay in the divisional round next Sunday.

“It was fun and it was scary at the same time. The way the season’s been going, this team, you know I didn’t want this to be our last time playing football,” Metcalf said. “So I’m just having fun out there with this team and just the group that we have.” 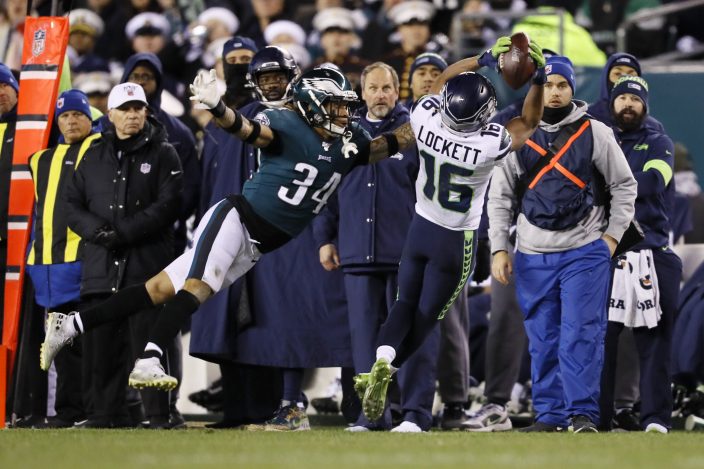 Wilson and Metcalf weren’t alone in their starring performances. Jadeveon Clowney had his best game in nearly two months but also became the target of anger in Philadelphia for his hit on Carson Wentz that knocked out the Eagles’ starting quarterback early on with a head injury. Clowney’s hit came late in the play and included helmet-to-helmet contact but was not flagged.

Clowney insisted after the game he was not trying to cause injury and Carroll defended Clowney on Monday.

“He hit him in the back of the head. He wasn’t trying to hurt him or anything. That just happened,” Carroll said. “It’s football and unfortunate that he got banged (up). Hate that he didn’t get to play the game. I don’t know why there is much discussion about it. The guy is chasing, and he dove on the guy and he hit him. It was unfortunate."

With the run game essentially shut down, Seattle made a smart adjustment to let Wilson go to work through the air. Wilson’s 325 yards passing were the fourth most in franchise history in a postseason game. While Metcalf made the headlines, Tyler Lockett and David Moore combining for six receptions for 119 yards was a major contribution.

In last year’s playoff opener against Dallas, Seattle failed to make an adjustment away from the run quickly enough and was unable to rally late. This time the balance in the game plan was smart. Seattle recognized its inability to run early and allowed Wilson to carry the offensive load.

“We felt like with the play action and stuff like that, me moving around a little bit, every once in a while would be a good thing,” Wilson said. “We knew that they are a very aggressive defense, they’ve always been."

Seattle must be better run blocking against Green Bay. Travis Homer and Marshawn Lynch combined for 19 yards rushing on 17 carries. As great as Wilson was, there needs to be some balance with the run.

Aside from the furor over his hit on Wentz, it was the best game by Clowney in two months. The core muscle/sports hernia injury he’s been dealing with since Week 10 has clearly limited the impact Clowney’s been able to have. But against the Eagles, he was as disruptive as he’s been since that November game against San Francisco. Clowney had five tackles and a sack, and the rest of Seattle’s pass rush seemed to feed off his presence. The Seahawks finished with a season-best seven sacks.

“Jadeveon Clowney was really a factor. Everybody worked, everybody contributed, but again his activity just adds to the factor and we’ve seen that before,” Carroll said.

Two of Philadelphia’s biggest plays were pass interference penalties against Tre Flowers. Carroll felt in both cases Flowers became careless late in the play and could have avoided the penalties. The first penalty was for 20 yards, the second for 39 yards. Philadelphia had just one other play longer than 18 yards — a 32-yard pass to Zach Ertz.

Carroll didn’t have updates on three key players: Ansah, guard Mike Iupati and left tackle Duane Brown. Ansah suffered a stinger when he collided with a teammate. Iupati (stinger) and Brown (knee) both did not play. Carroll said Iupati has been dealing with the injury for a few weeks and was not able to participate in practice last week. Brown is recovering from minor knee surgery two weeks ago.

Wide receiver Jaron Brown, who missed Sunday’s game for personal reasons, should be back and able to play this week, Carroll said.

9 — A win in Green Bay would be Seattle’s ninth road win of the season including the postseason. According to the Pro Football Reference database, only two teams have won nine road games in a season: the 2005 Steelers and 2007 Giants. Both went 3-0 away from home in the postseason and ended up winning the Super Bowl.

Green Bay has been a challenging trip for the Seahawks. Seattle has not won there since Nov. 1, 1999, losing its past eight visits. That includes a pair of playoff losses: Jan. 4, 2004, in the wild-card round and Jan. 12, 2008, in the divisional round.