Petr Mrazek stopped 32 shots for his third shutout of the season, and Lucas Wallmark and Martin Necas scored within 63 seconds of each other near the end of the second period to help the Carolina Hurricanes defeat the Arizona Coyotes 3-0 on Friday night.

It was the second straight night the Coyotes were shut out after they lost 4-0 at Tampa Bay on Thursday.

The Hurricanes were leading 1-0 when Wallmark’s tip of Dougie Hamilton's shot went off Antti Raanta’s glove and head before landing in the goal 1:13 before the second intermission. 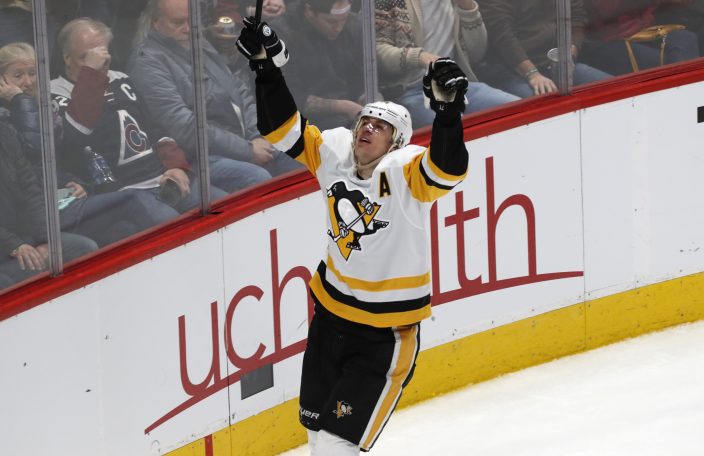 Necas increased the lead to 3-0 when he curled behind the net and lifted a backhander into the goal with 9.6 seconds remaining in the period.

Warren Foegele also scored for the Hurricanes, who won their second in a row and improved to 4-2-0 on their seven-game homestand.

Dylan Larkin scored the only goal in the shootout to give the Red Wings the win over the skidding Senators.

Tyler Bertuzzi had a goal and an assist, and Larkin also scored in regulation for Detroit. Red Wings defenseman Filip Hronek had two assists. Jonathan Bernier made 29 saves and thwarted Tyler Ennis, Anthony Duclair and Artem Anisimov in the tiebreaker.

It was the Red Wings’ third win in five games, the first time they’ve done that since Nov. 8-16.

Colin White had a goal and an assist and Brady Tkachuk also scored for Ottawa, which lost its season-high sixth straight. Marcus Hogberg stopped 26 shots.

Jared McCann scored at 3:19 of overtime and the Penguins beat the Avalanche for their fourth straight road win.

Evgeni Malkin and Bryan Rust each had a goal and an assist for Pittsburgh, which recovered from blowing a late lead to pick up the two points. Matt Murray made 28 saves, Teddy Blueger also scored and Dominik Kahun had three assists.

The Avalanche tied the game with 30.4 seconds left in regulation when Matt Calvert tipped in a shot by Cale Makar. Both teams had chances in overtime before McCann beat Pavel Francouz from the slot for his 12th goal of the season.

Gabriel Landeskog had a goal and an assist, and Nathan MacKinnon also scored for Colorado.

India had to put in some lengthy o ...

Zion Williamson had 25 points for ...

Acciari scores late to give Panthers 5-4 win over Wild