Kendrick Nunn scored 33 points, Goran Dragic added 17 and the Miami Heat held on to beat the San Antonio Spurs 106-100 on Wednesday night and move back into the No. 2 spot in the Eastern Conference.

Bam Adebayo — cut from USA Basketball’s national team by Spurs coach Gregg Popovich over the summer — had 14 points, 13 rebounds and seven assists for the Heat. Miami improved to 18-1 at home, one win shy of matching last season’s home win total. 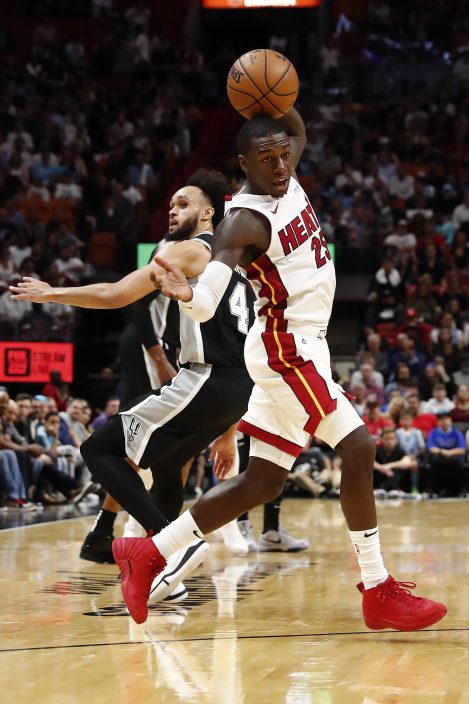 DeMar DeRozan scored 30 points on 12-of-14 shooting for San Antonio, while Patty Mills added 21 for the Spurs.

San Antonio had won three of its last four games, all those wins coming against top Eastern Conference teams Milwaukee, Boston and Toronto. But the Spurs missed 11 of their first 12 shots to start the fourth quarter and lost the lead for good during that drought.

Tobias Harris scored 34 points, including two big baskets in the final two minutes that proved to be the difference, as Philadelphia topped Brooklyn.

Brooklyn has lost nine of 11 overall and six straight away from home. The Nets were led by Spencer Dinwiddie’s 26 points and eight assists. Jarret Allen had 17 points.

Josh Richardson had 15 points and Furkan Korkmaz added 15 off the bench. Al Horford had 14 points and eight rebounds for the Sixers.

Sekou Doumbouya scored a season-high 24 points and Detroit snapped a three-game losing streak with a win over Boston.

Markieff Morris matched his season best with 23 points. Derrick Rose added 22 points and Sviatoslav Mykhailiuk had a season-high 21. The Pistons shot a season-best 60.3% from the field.

Andre Drummond added 13 points and 13 rebounds to post his 34th double-double of the season.

Gordon Hayward had 25 points and seven rebounds, Jaylen Brown finished with 24 points and 12 boards and Kemba Walker scored 19 points on 7-of-19 shooting and 2 for 11 from 3-point range.

Shares were mostly higher in Asia ...