Roger Federer, for one, figures questions about whether Rafael Nadal or Novak Djokovic — or both? — will surpass his men's record for most Grand Slam singles titles are moot.

That's because he's sure it's going to happen. And he's OK with that. Ending up in third place, Federer insists, would be just fine.

"I think the way it's going, obviously, Rafa and Novak will win more," Federer said matter-of-factly during a recent interview with The Associated Press in the city he uses as his preseason training base, "because they're that good. And the season they had (in 2019), again, shows that there is more to come for them." 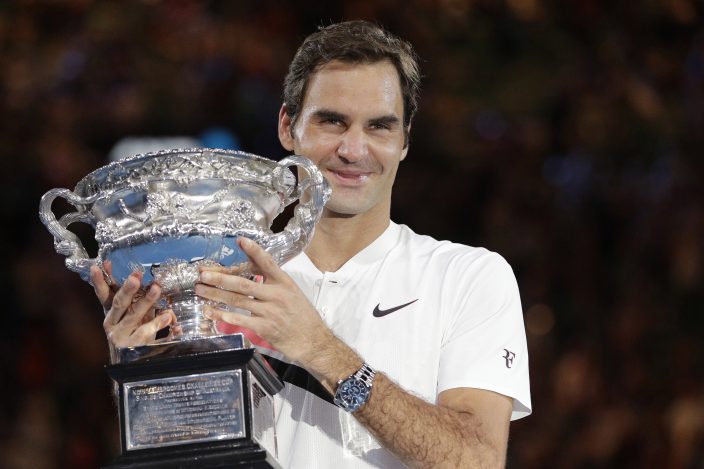 He didn't say this with a wistful sigh or a disappointed glance at the floor or a trace of regret. That's just the way he sees things at the moment. Entering the Australian Open, scheduled to begin Monday in Melbourne (Sunday EST), Federer leads the list with 20 majors, followed by Nadal with 19, then Djokovic with 16.

So as soon as the end of this tournament, Nadal could pull even with Federer for the first time. Whether or not it truly matters who comes out on top when all is said and done, everyone is going to be paying attention to how it shakes out.

Including Federer, who surpassed Pete Sampras' old standard of 14 a decade ago. 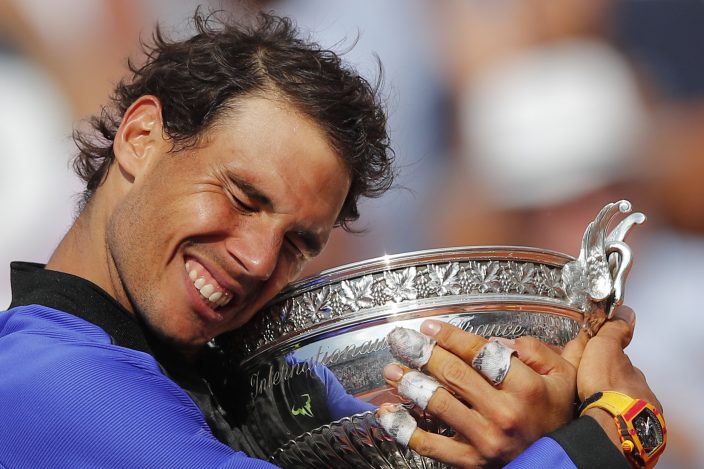 "I guess you do care, to some extent, just because it's normal," Federer said, then mentioned how much it meant to him that Sampras was sitting in the Centre Court stands for No. 15.

"I looked up to him so much that I felt, also, uncomfortable maybe, sometimes, breaking his records. It's not something I ever wanted to do. It just happened to be like this. But of course I knew it was a big, big-time moment in our sport. And I think those are the moments you will remember," Federer said. “Now, at the end, if somebody else would pass you, I mean, I guess it's OK, because that's what sports is all about. It's a lot about numbers. It's a lot about records. But I had my moment and I always said everything that comes after 15 was, anyway, a bonus. And especially after the knee injury (in 2016), everything that came after that was a bonus. I would have taken one more Slam, and I was able to get three more -- and three amazing ones.” 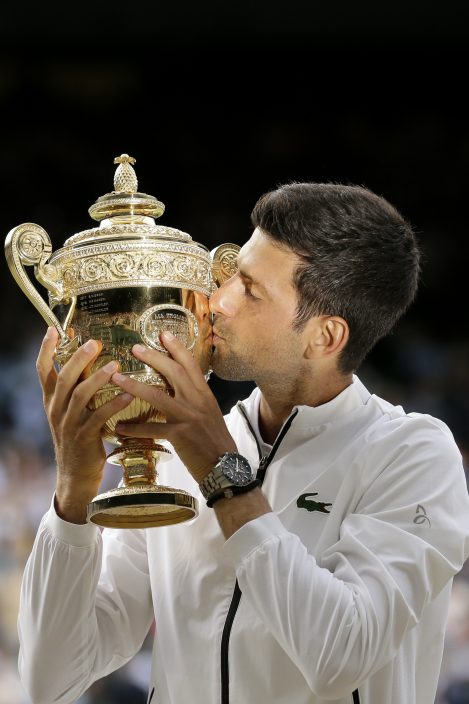 Nadal, currently No. 1 in the ATP rankings, and Djokovic, who is No. 2 ahead of Federer, each took home two major trophies last season.

Djokovic won the Australian Open (beating Nadal in the final) and Wimbledon (beating Federer in the final after saving two championship points).

Nadal won at Roland Garros (beating Federer in the semifinals) and the U.S. Open (facing neither of the other two). 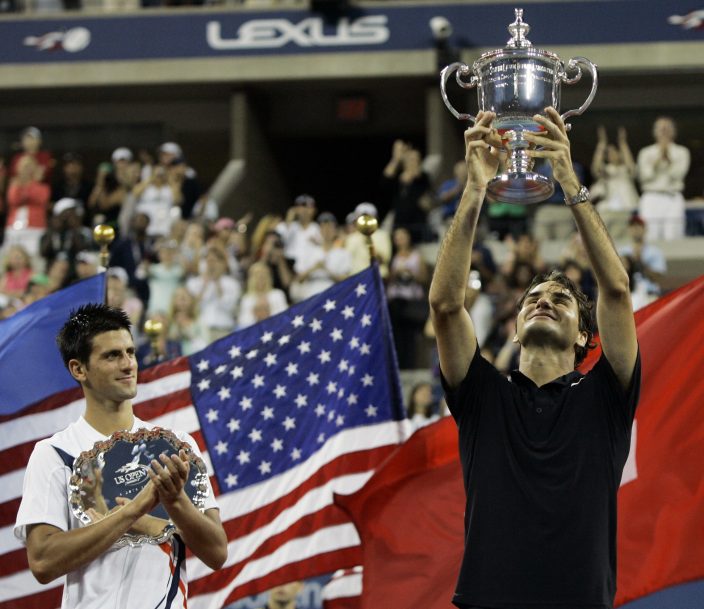 FILE - In this Sept. 9, 2007, file photo, Novak Djokovic, left, of Serbia applauds as Roger Federer of Switzerland holds up the championship trophy after winning the men's finals at the U.S. Open tennis tournament in New York. Federer is sure that Djokovic and Rafael Nadal will surpass his men's record for most Grand Slam titles, and he's ok with that. (AP PhotoElise Amendola, File)

“I always say the same: I would love to be the one who wins more,” Nadal said, "but I am not thinking (about it) and I'm not going to practice every day ... for it."

After his seventh championship in Australia a year ago, Djokovic said: “I do want to definitely focus myself on continuing to improve my game and maintaining the overall well-being that I have — mental, physical, emotional — so I would be able to compete at such a high level for the years to come, and have a shot at eventually getting closer to Roger's record.” 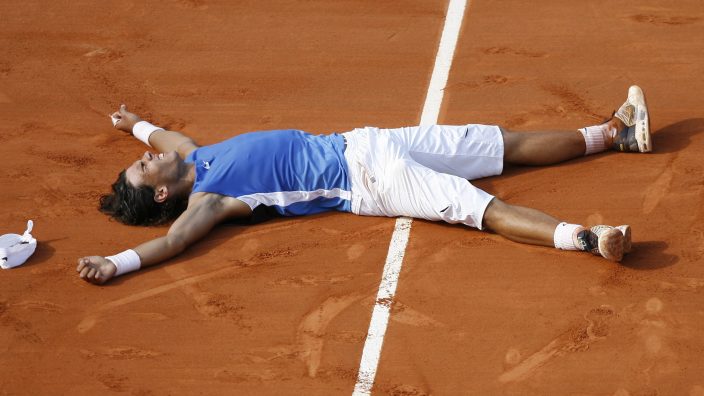 FILE - In this June 11, 2006, file photo, Spain's Rafael Nadal lays on the court after defeating Switzerland's Roger Federer in the men's final match of the the French Open tennis tournament at Roland Garros stadium in Paris. oger Federer tells The Associated Press that he figures Rafael Nadal and Novak Djokovic both will surpass his men's record for Grand Slam titles. (AP PhotoCapucine BaillyPool, File)

He is 38, an age at which no one has won a Slam title in the professional era; he doesn't feel compelled to quit anytime soon. Still, time is certainly on the side of Nadal, 33, and Djokovic, 32.

"I honestly think it's going to be quite exciting to see how much longer can they go. How much more can they win? They might have some more incredible years ahead of them. That's my assumption," Federer said. "It's a bit of a golden time for tennis right now, no doubt."

Also of particular interest, of course, is when a new face will emerge from the crop of 20-somethings who have been rising in the rankings. There hasn't been a first-time male champ at a major since 2014.

FILE - In this Aug. 27, 2019, file photo, Felix Auger-Aliassime, of Canada, pumps his fist after winning a point against Denis Shapovalov, of Canada, during the first round of the U.S. Open tennis tournament in New York. Of particular interest is when a new face will emerge from the crop of 20-somethings who have been rising in the rankings. (AP PhotoCharles Krupa, File)

Ask Federer to name names, and he offers several, calling them "that whole group of guys."

"It's an elite group of 10 now, which is nice. It's not just maybe one or two that we thought were pretty good," Federer said. "So I think it's changed a little bit in the last, sort of, 18 months. It's just really, really hard to predict who's going to win." 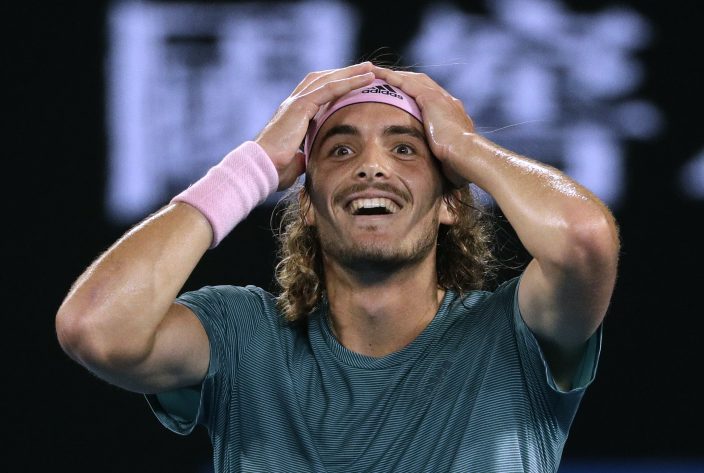 FILE - In this Jan. 20, 2019, file photo, Greece's Stefanos Tsitsipas celebrates after defeating Switzerland's Roger Federer in their fourth round match at the Australian Open tennis championships in Melbourne, Australia. Of particular interest is when a new face will emerge from the crop of 20-somethings who have been rising in the rankings. (AP PhotoMark Schiefelbein, File)

Here's something Federer is certain of, though: One day, someone will come along and accumulate majors the way no one ever had until he, Nadal and Djokovic rewrote the record book.

“It's going to happen, inevitably,” Federer said, shaking his head. “And it's almost not going to be that hard, maybe, anymore, later on, for some reason, I just feel like, because the players will have seen what we did. And they didn't see just one guy doing it, once every 30 years. They saw like three guys doing it, in the shortest period of time, right after 'Pistol' (Sampras). So I just think players are going to believe more. I think maybe the surfaces in some ways also allow you, maybe, if you're on a hot streak, just to run through more years of domination, like what Novak, Rafa and me, we've all done.”

Impossible to know who, though. Or when.

After all, Federer never saw the magnitude of his own success — or those of his rivals — coming.

"I didn't predict I was going to have this many majors. I was hoping to maybe have one, to be quite honest, at the very beginning of my career. When I played Novak, I thought, 'Yeah, he's good. He might win a major.' You know? 'Rafa, he's probably going to win the French. Maybe once. Or a few times.' But you don't go 12 times there. Or, you know, streaks of not having lost matches on hard or clay for, I don't know, nine months. It's just stuff that eventually builds,” he said. “So, hard to tell, but there's a ... group of guys that I see now probably winning at least, like, four or five majors -- which then can lead to 15 or more, of course.”

The comments could easily have com ...

German Carnival floats take aim at racism in wake of at ...

Biting commentary on racism in Ger ...