And with that Paris Fashion Week got into full swing Thursday. The start of one of the industry's main highlights for the next fall/winter season started with a swathe of houses — not just Vuitton — ramping up their theatrics to showcase their designs.

Here are some highlights of the day's fall-winter 2020-2021 menswear collections. 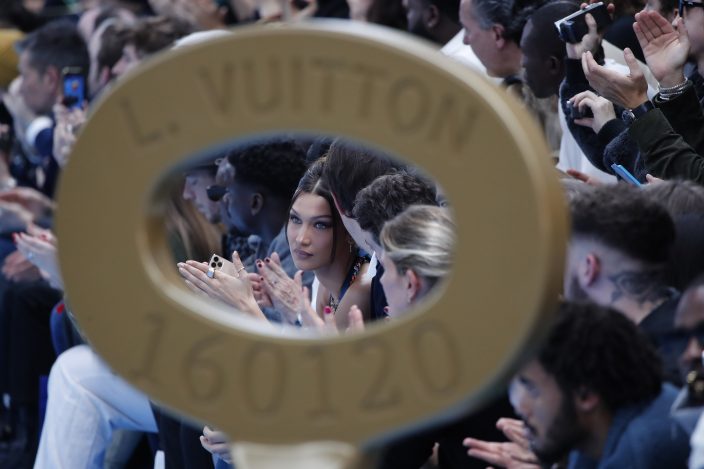 Some guests tripped on a 3-meter pencil and sharpener strewn surreally on the catwalk inside the Tuileries Gardens venue, while others nearly sliced themselves on a giant pair of scissors. 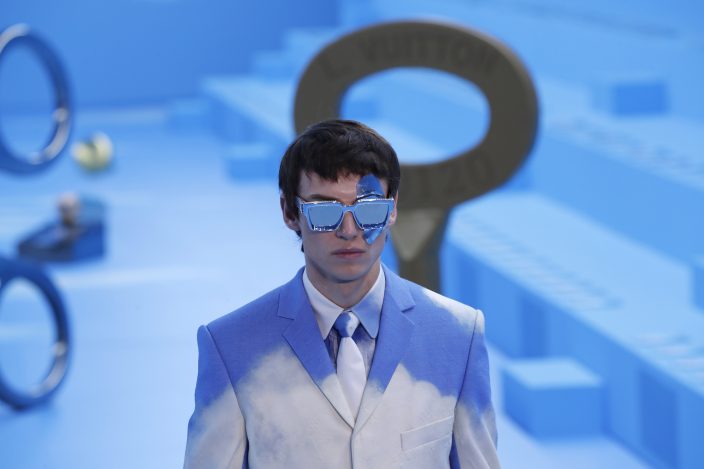 Designer Virgil Abloh, this season, continued his exploration of boyhood.

Styles were all about mixing and matching or day-dreaming — channelling how an adolescent boy might explore different ways of dressing as he grows up.

A taupe business suit was twinned with a boyish almond-colored duffel coat. Elsewhere, a tight shirt and suit design was accessorized with an enormous ombre leather bag. It created a humorous, off-kilter feel.

Abloh delivered the sense of day-dreaming very literally toward the end of the 55-look collection in a series of total-look “cloud” suits — and herein lay the problem.

There were plenty of great ideas on the catwalk, but — like the decor choices themselves — they at times lacked subtlety.

The delicate ruffles Abloh fitted onto suit jackets and coats could have made for a stylish design flourish, for instance, but they were overused to excess as they appeared all over the lapels, sleeves and hems.

Myriad baby's-breath flowers spray-painted silver were chosen by Givenchy as the show decor inside its illustrious couture salons.

This visual metaphor, of a classical bloom with a punk makeover, was key to understanding this accomplished fall-winter collection — one that subtly broke up classic menswear codes with touches of rebellion.

Safety pins, once the instrument used to pierce ears or noses, were blown up and reinterpreted as a fastening on a sophisticated dark four-buttoned coat. The look's shiny red dog-collar was both sartorial and kinky.

A flash of luxurious silky vermilion peeped out from underneath the lapel of a retro loose brown check suit on one emaciated male model with shaggy, unkempt hair.

This collection, at once playful and thoughtful, helps consolidate Clare Waight Keller's burgeoning reputation as one of the most talented hands in Paris menswear.

Rick Owens was in a philosophical mood. The American designer posed a question that is pertinent for the oft-pretentious fashion industry: How much of our daily persona is about performance, and how much is just natural behavior?

“At 58, I find myself, for better or worse, performing,” Owens said, admitting that sometimes this shows a "falseness.”

This starting point produced a fun and theatrical collection at the Palais de Tokyo that went from the show-off to the low-key, demonstrating both sides to human behavior.

These of course, represented the extrovert part of the 44-look show — styles that are the most closely associated with the exuberant designer.

In contrast to that, snug gray cashmeres that wrapped gently around the body, or were draped cleverly in different weights, later showed both a softer way to dress — and a rarely seen softer side to Owens himself.

“An outfit is improvisation, a jam session,” explained Japanese fashion house Issey Miyake of its mad-hat musical and theatrical fall-winter presentation inside the Pompidou Center.

Jazz was this season's catwalk show theme — if it could be called a catwalk show. For thirty minutes, acrobats spun on gyrating hoops, itinerant jazz musicians blasted out performances on brass instruments and actor-models broke the fourth wall by shaking hands with front-row guests.

All the performers were, of course, dressed in Homme Plisse Issey Miyake, to showcase this season's line of clothes with intricate pleating.

Vibrant color was an important theme. It appeared as jazzy 80s prints on loose pleated plants. or as color-blocking via some culottes in dandelion and a soft coat in true blue.

Though the creative envelope wasn't pushed too much this season, the theatrics really worked to show off the dynamic feel of the springy fabric.

Census hiccups in Alaska may offer preview for rest of ...

More than a month into the start o ...

Gaultier bids the runway adieu on final day of couture

Chanel delves into founder's orphanage past in couture show