Mikaela Shiffrin has yet to win a race in 2020 and actually recently recorded a rare "did not finish" in an event.

The two-time Olympic gold medalist knows what some might be thinking: What is going on?

Her response: Nothing that a little rest wouldn't fix. Only, there's no time. 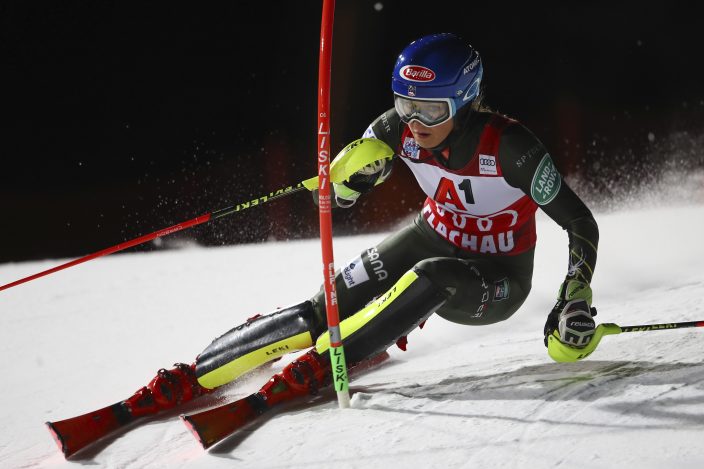 The American ski racer's quest for a fourth straight overall World Cup title seems tighter than usual at the midseason point. Shiffrin currently leads rival Petra Vlhova of Slovakia by 273 points, which is sizable but could be eclipsed in as little as a three-race span.

Shiffrin does find it amusing that something may be considered “off” with her skiing. She's b een on the podium in 10 of her 14 races this season — and three times as the winner.

"People are like, 'Oh, no, what's wrong?'" Shiffrin said Thursday. “I'm like, 'Is this what you consider an off year for me?' It's kind of hilarious, actually. It's really funny to think that this would be what most people would consider a bad season or poor results. I've been on most podiums and won multiple races. It's sort of like, 'OK, I'll take that.'” 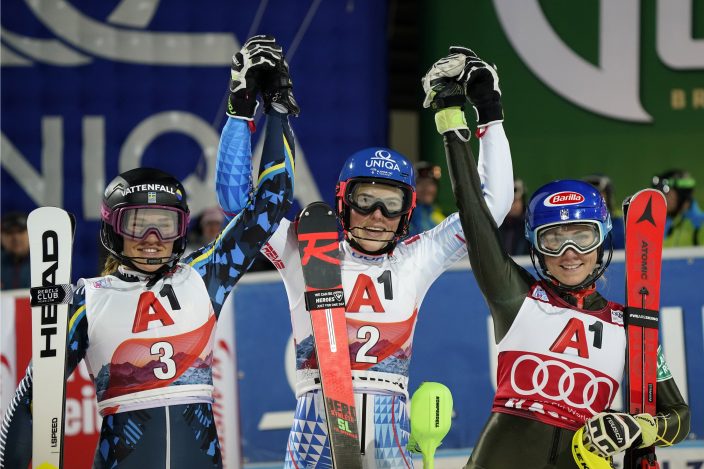 Shiffrin was so dominating in 2018-19 when she won 17 races and beat Vlhova by 849 points for the overall title.

“People said everything looked so easy," said Shiffrin, who's the rare all-discipline racer. "It's not easy."

"To me, it looks like Petra's gaining more and more confidence with her skiing," said Shiffrin, who has 64 career World Cup wins, which trails only Marcel Hirscher (67), Lindsey Vonn (82) and Swedish great Ingemar Stenmark (86). “She's always been an incredible and very disciplined skier. But she's really finding the perfect rhythm with that skiing style."

Sandwiched in between, Shiffrin turned in a “did not finish," when she slid out on her left hip during a sharp turn in her first run of an Alpine combined.

“When I go through something like these last couple of races, that makes it a little bit more obvious just how difficult it is to be on top and stay on top,” Shiffrin said. “Even last season, I was telling everybody, 'I don't expect this. This is unbelievable.' I'm constantly going back to work every single race, because I don't expect this."

Recently, a report came out about teams video taping training sessions and included Shiffrin's feelings on the subject since she's constantly being filmed. She and her team try to maintain a low profile in training, but there's only so much privacy on the slopes. One of her concerns is someone showing up with no athlete training on the hill that day simply to film. And while she didn't mention any names, some came away with the impression she was directing it toward Vlhova's team.

She wanted to clear that up.

This might be as well: A break. She said she could really use a few off days to recharge.

But the women's World Cup tour rolls on to Sestriere, Italy, this weekend for a giant slalom and parallel GS. That's followed by several weeks of speed racing beginning in Bansko, Bulgaria. The next technical events are scheduled for Maribor, Slovenia, in mid-February.

For the moment, she's unsure of her speed racing plans, only saying: “We're heading to Bansko with one day at a time from there.”

She's weighing the rewards of rest against racing.

“If I could get an actual day of rest that doesn't include driving six hours or having a strength session on top of in-season maintenance ... Just like a little bit of a reset, then the motivation comes back really quickly," Shiffrin said. "I feel like I'm going to be able to raise my level of skiing again. It's just going to take a little bit of time. It won't even take that much.”

Turkey on Friday raised the death ...