Bayern Munich fans fed up with the club’s longstanding links with Qatar are taking a stand against the club's lack of action in response to allegations of human rights abuses in the country.

Around 150 fans packed into a room in Munich’s EineWeltHaus (One World House) on Thursday to hear a panel including two migrant workers from Qatar discuss its treatment of foreign workers in the country before it hosts the 2022 World Cup.

They accused Bayern of turning a blind eye to horrific working conditions in the sovereign state while it accepts sponsorship deals and holds winter training camps in the country. 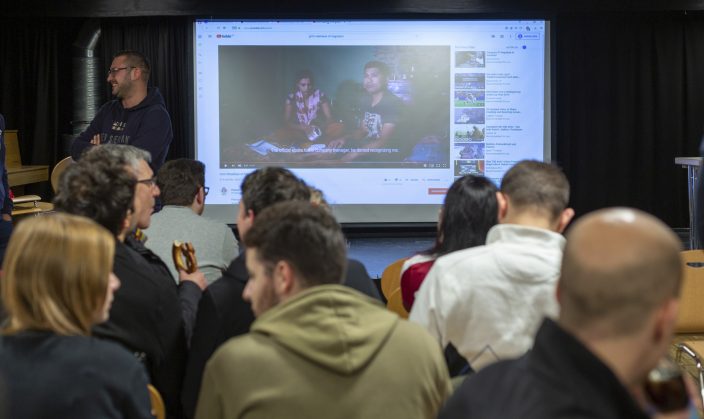 In this Thursday, Jan. 16, 2020 photo Bayern Munich fans gather for a panel discussion on the club’s sponsorship links with Qatar and its lack of response to alleged human rights abuses in the country at the EineWeltHaus (One World House) in Munich, Germany. (AP PhotoCiaran Fahey)

“It’s something a lot of Bayern fans see very critically,” said Robin, one of the meeting organizers. He asked that his surname not be revealed as he did not want to be identified by the club.

Qatar Airways is considered a “premier partner” by Bayern, which carries the state-owned airline’s logo on its sleeve. It signed a five-year sponsorship deal with Bayern in 2018, replacing the club’s previous deal with Doha Airport. Bayern is also linked to Qatar though Volkswagen subsidiary Audi, which has an 8.33% stake in the club. Qatar Holding LLC holds 14.6% of the shares in Volkswagen.

The team has been holding its winter training camp in Qatar since 2011. Former Bayern president Uli Hoeneß previously praised the training conditions in the country, saying the grass on the pitches there was “cut with a nail clipper.” 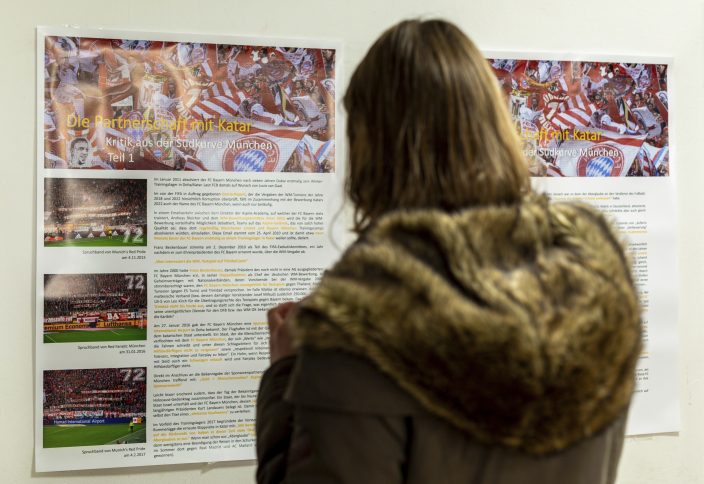 In this Thursday, Jan. 16, 2020 photo a Bayern Munich fan reads about the club’s sponsorship links with Qatar and its lack of response to alleged human rights abuses in the country during a meeting of supporters at the EineWeltHaus (One World House) in Munich, Germany. (AP PhotoCiaran Fahey)

The fans milled around a table filled with food and drinks before musing at the various informative placards placed around the room. All the proceeds from the catering were to go to an organization helping migrant workers in Qatar.

“We’re not here for ourselves. This is about basic human rights,” said Chris, a Bayern fan who declined to give his full name because he skipped work to attend the meeting.

Organizers showed a film from German broadcaster WDR in which journalist Benjamin Best and his team used hidden cameras to document migrant workers’ exploitation in Qatar and the arrival of their coffins back in Nepal. The team filmed one funeral pyre.

The two migrant workers -– who asked not to be named or photographed for fear of consequences from Qatar -– told their stories and collaborated the footage shown earlier in the WDR film. Organizers also asked for fans not to be identified in photographs.

Best led the podium discussion, though there was no representative from Bayern present, so a team jersey was ceremoniously placed on an empty chair for the club.

Nicholas McGeehan, who worked for Human Rights Watch (HRW) from 2012-17, said he advised Bayern when it was looking at sponsorship arrangements in the region and that he warned the club it should be careful. He criticized the club’s motivations and accused it of being “sneaky” in its approach.

“The approach to us wasn’t about resolving or helping the situation. It was about providing them with a public relations cover,” McGeehan said.

“The decision is another important step taken by the government of Qatar to create a modern labor system that strengthens Qatar’s employment laws and protects the rights of all expatriate workers,” the government said in a statement.

But the panel said such promises have been made before.

“You’re talking about a system that facilities slavery, basically, in its worst form,” McGeehan said.

“The situation on worker deaths is we don’t know how many are dying, but we have a rough idea how many of the deaths are unexplained. Seventy-five percent of the deaths are unexplained, we know that. We know that in 2012 about 400 unexplained deaths happened. We’ve had no data since then. None at all. They have refused to release any data at all,” McGeehan said. “So they won’t tell us how many workers are dying, or how they’re dying.”

McGeehan added: “Heat is killing workers in Qatar, and Qatar is doing nothing about it.”

Bayern earlier provided The Associated Press with a statement in which it defended its ties with Qatar and said it was committed to dialogue.

“Such talks do not take place in the open, but in a confidential atmosphere … if it were only a matter of making points in public through selected discussion partners against other positions, we would not participate,” the club said.

“The situation for workers in Qatar has changed for the better in the past 24 months. Many have made a contribution to this. Football has played its part,” Bayern said.

HRW on Monday issued a statement in which it said Qatar’s efforts at reform were insufficient, and that the kafala system that enabled the exploitation of workers hadn’t been fully scrapped.

“Qatar passes laws and regulations with great fanfare designed to protect labor and refugee rights on paper, but without effective implementation and strict enforcement, these laws aren’t worth the ink they are written with and people remain vulnerable to serious abuse,” HRW’s Michael Page said.

Jonas Hegemeier, a member of Bayern Fan Club No. 12 and one of the meeting’s organizers, outlined some of the frustrations being felt by members.

“We’re not seeing any results. We’re not seeing that conditions have improved at all," Hegemeier told the AP." "I am a little bit disappointed with the club for sure. They’re saying they prefer closed-door meetings, and that’s apparently what they have been doing for the last couple of years, but since there have been no results, we feel public events would be better. We’re encouraging them to try other ways, but apparently they disagree with that view and we have to live with it even though we don’t like it.”

Hot Pockets heir gets 5 months in prison for college sc ...

An heir to the Hot Pockets fortune ...