Iran's supreme leader says his nation is living through “days of God.”

The Islamic Republic has been reeling from one crisis to another, from the targeted killing by the United States of its top general to the Revolutionary Guard's accidental shootdown of a passenger plane carrying scores of young people, most of them Iranians. U.S. sanctions have crippled its economy as tensions with America have soared.

In a rare Friday sermon in Tehran, Ayatollah Ali Khamenei stuck to the playbook Iran has relied on since 1979, blaming the country's woes on the U.S. and other Western powers, and proclaiming that Iranians still support the Islamic Revolution. 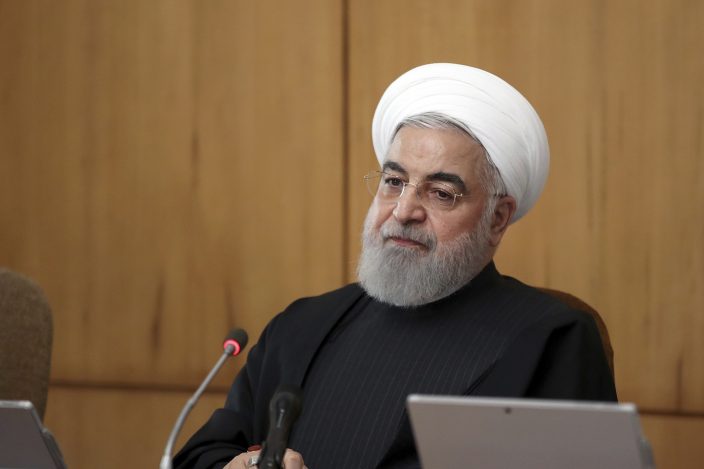 In this photo released by the official website of the Office of the Iranian Presidency, President Hassan Rouhani speaks in a cabinet meeting in Tehran, Iran, Wednesday, Jan. 15, 2020. Iran's president is warning that European soldiers deployed in the Mideast "may be in danger" after Britain, France and Germany challenged Tehran over breaking limits of its 2015 nuclear deal. (Office of the Iranian Presidency via AP)

He pointed to the outpouring of grief after Gen. Qassem Soleimani, Iran's top general, was killed in a U.S. airstrike in Baghdad. Hundreds of thousands of Iranians attended funeral services across the country for Soleimani, who was revered by many as a war hero. But the funeral itself was marred by tragedy when 56 people died in a stampede of mourners in Soleimani's hometown of Kerman.

The moment of national unity was shattered days later, when Iranian forces accidentally shot down a Ukrainian jetliner, killing all 176 people on board, and then concealed their responsibility until they were confronted with mounting evidence from Western leaders.

Here's a look at the various crises Iran faces: 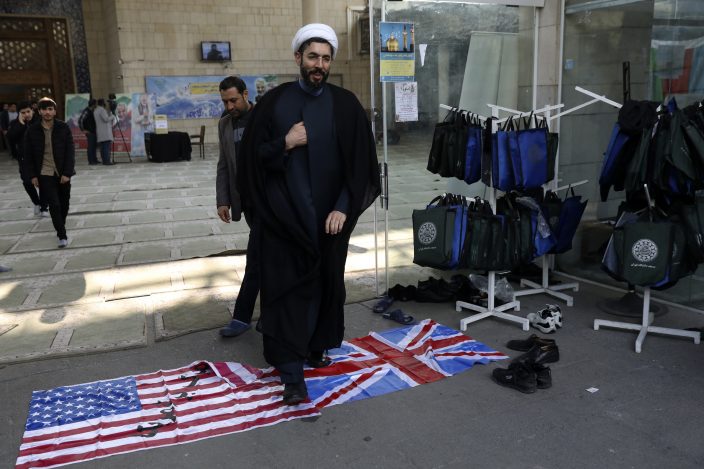 A cleric walks on the U.S. and British flags while leaving a gathering to commemorate the late Iranian Gen. Qassem Soleimani, who was killed in Iraq in a U.S. drone attack on Jan. 3, and victims of the Ukrainian plane that was mistakenly downed by the Revolutionary Guard last Wednesday, at the Tehran University campus in Tehran, Iran, Tuesday, Jan. 14, 2020. M (AP PhotoVahid Salemi)

After unilaterally withdrawing from Iran's 2015 nuclear agreement with world powers, President Donald Trump began ratcheting up sanctions. The sanctions have exacerbated an economic crisis, sending the local currency into a freefall and wiping away many people's life savings.

The Institute of International Finance, a global association of financial institutions, estimates that Iran’s economy will contract this fiscal year by more than 7%, mostly because of the drop in crude oil exports due to sanctions. The report found that as a result, Iran’s reserves are expected to dip to $73 billion by March, totaling nearly $40 billion in losses over two years. 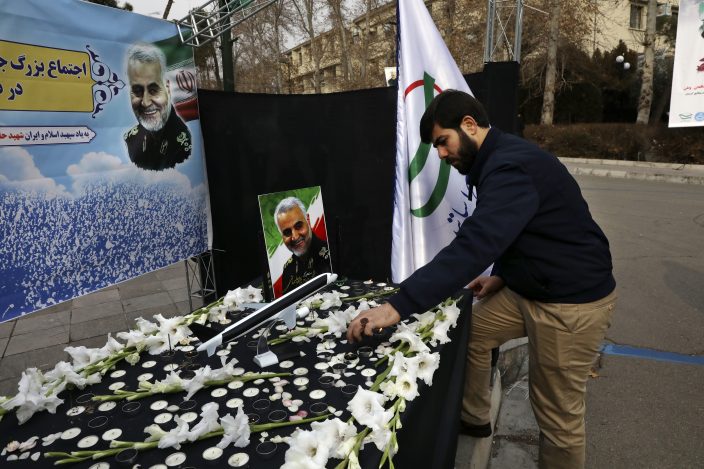 A man lights a candle at a gathering to commemorate the late Iranian Gen. Qassem Soleimani, shown in posters, who was killed in Iraq in a U.S. drone attack on Jan. 3, and victims of the Ukrainian plane that was mistakenly downed by the Revolutionary Guard last week, at the Tehran University campus in Tehran, Iran, Tuesday, Jan. 14, 2020. (AP PhotoVahid Salemi)

THE LOSS OF SOLEIMANI

As head of the Revolutionary Guard's elite Quds Force, Soleimani was the architect of Iran's regional military operations and its support for armed groups in Lebanon, Syria, Iraq and Yemen. He was blamed for the killing of hundreds of American soldiers by Iran-backed militias in the years after the 2003 U.S.-led invasion of Iraq. He also helped Syrian President Bashar Assad's forces battle rebels and Islamic extremists. In Iran, he was seen by many as a mythic figure who had defended the nation. Critics and supporters alike say he will be tough to replace. 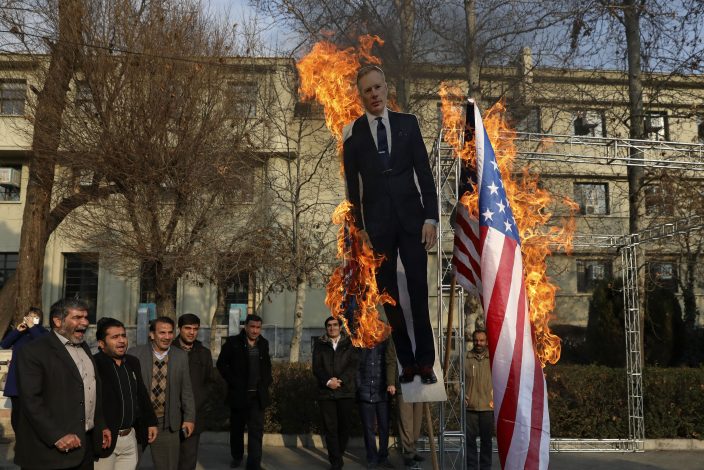 Pro-government protesters set fire to U.S. and British flags with a life size cut-out of Britain's ambassador to Tehran Rob Macaire, in a gathering to commemorate the late Iranian Gen. Qassem Soleimani, who was killed in Iraq in a U.S. drone attack on Jan. 3, and victims of last week's Ukrainian plane crash outside Tehran, at the Tehran University campus in Tehran, Iran, Tuesday, Jan. 14, 2020. (AP PhotoVahid Salemi)

In response to the killing of Soleimani, Iran launched a wave of ballistic missiles at U.S. bases in Iraq. No one was seriously wounded, though several soldiers were screened for concussions and sent to Germany for medical treatment. As Iran braced for a counterattack, the Revolutionary Guard shot down a passenger plane shortly after it took off from Tehran's international airport last week, mistaking it for a U.S. cruise missile. Most of those killed were Iranians.

Iranian authorities concealed their role for three days, initially blaming a technical failure, until Western leaders said they had mounting evidence that a surface-to-air missile had brought the plane down. Iranian officials have apologized and promised to punish those responsible, but have widespread criticism and international demands to pay compensation to victims' families. 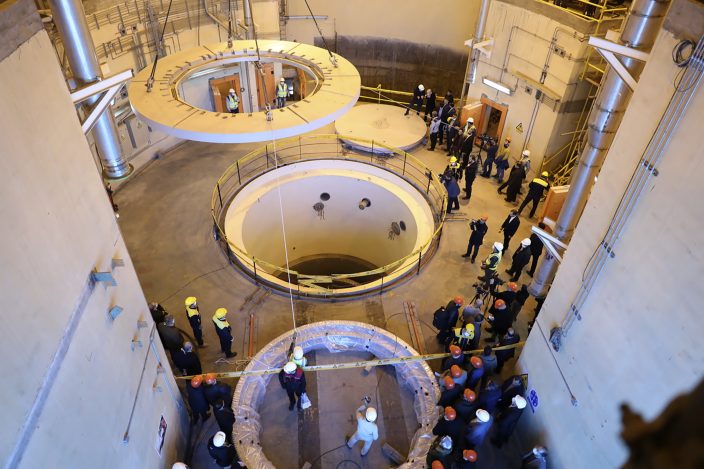 FILE - In this Dec. 23, 2019 file photo released by the Atomic Energy Organization of Iran, technicians work at the Arak heavy water reactor's secondary circuit, as officials and media visit the site, near Arak, Iran. Britain, France and Germany said Tuesday Jan. 14, 2020, they are triggering a dispute mechanism that is part of the nuclear deal with Iran over its failure to live up to terms of the pact. (Atomic Energy Organization of Iran via AP, File)

As the economic crisis has worsened, Iran has seen wave after wave of sporadic, leaderless protests. The protests are usually sparked by economic grievances but rapidly escalate into calls to overthrow the Islamic Republic. The demonstrations have often turned violent, and security forces have responded with force. Amnesty International says more than 300 people were killed in protests in November over a hike in gasoline prices, when authorities shut down the internet for several days.

The Revolutionary Guard's announcement on Saturday that it was responsible for shooting down the plane sparked days of protests in the streets and on university campuses. Security forces dispersed some of the crowds with tear gas and live ammunition. 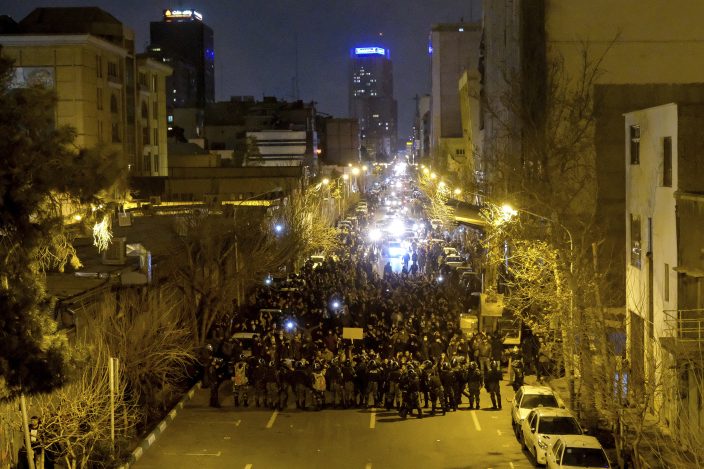 In this photograph taken Saturday, Jan. 11, 2020, Iranian police officers take position while protesters gather in front of Amir Kabir University in Tehran, Iran, to remember victims of a Ukrainian airplane shot down by an Iranian missile. On Monday, Jan. 13, 2020, online videos purported to show that Iranian security forces fired both live ammunition and tear gas to disperse demonstrators protesting against the Islamic Republic's initial denial that it shot down a Ukrainian jetliner. (AP Photo)

Iran continued to comply with the nuclear deal despite U.S. sanctions until last summer, when it said it would no longer fully abide with the agreement if it received no economic benefits. Iran began openly breaching certain limits set by the deal, and after the killing of Soleimani said it was no longer bound by any of the agreement's restrictions.

Britain, France and Germany, which also signed the deal along with China and Russia, have been trying to salvage it. They have searched for a mechanism that would allow them to keep trading with Iran but have been unable to find one that would protect their companies from U.S. sanctions.

Earlier this week, the European nations triggered a dispute mechanism in the nuclear deal in an attempt to bring Iran back into compliance. They say they are committed to saving the agreement, but the dispute process could potentially result in the snapback of international sanctions, further compounding Iran's woes. 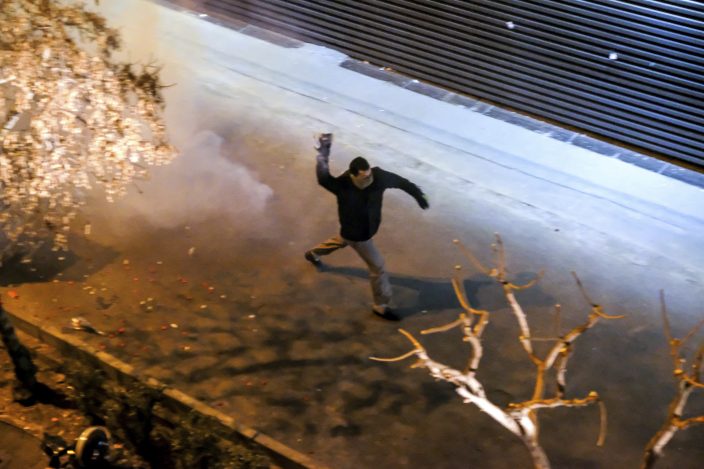 In this photograph taken Saturday, Jan. 11, 2020, an Iranian protester prepares to throw a tear gas canister back at police in front of Amir Kabir University in Tehran, Iran, during a demonstration to remember victims of a Ukrainian airplane shot down by an Iranian missile. On Monday, Jan. 13, 2020, online videos purported to show that Iranian security forces fired both live ammunition and tear gas to disperse demonstrators protesting against the Islamic Republic's initial denial that it shot down a Ukrainian jetliner. (AP Photo) 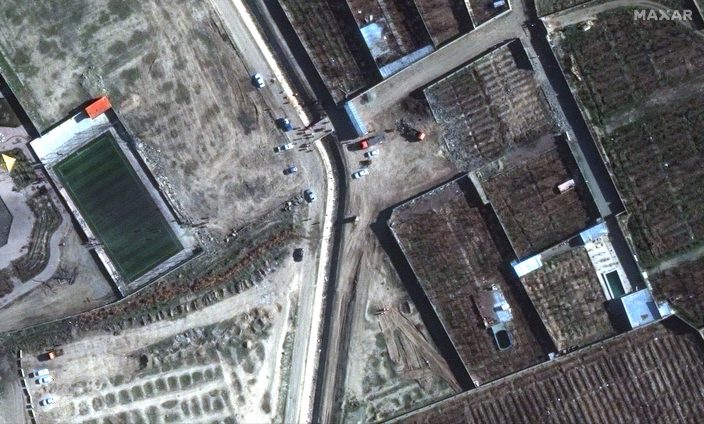 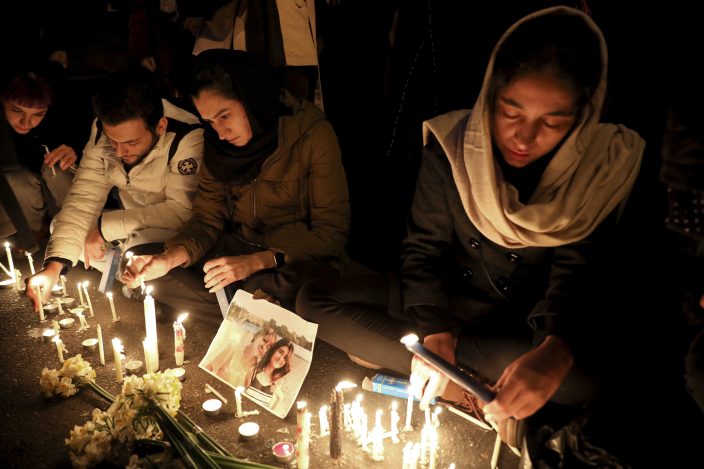 People gather for a candlelight vigil to remember the victims of the Ukraine plane crash, at the gate of Amri Kabir University that some of the victims of the crash were former students of, in Tehran, Iran, Saturday, Jan. 11, 2020. Iran on Saturday, Jan. 11, acknowledged that its armed forces "unintentionally" shot down the Ukrainian jetliner that crashed earlier this week, killing all 176 aboard, after the government had repeatedly denied Western accusations that it was responsible. (AP PhotoEbrahim Noroozi) 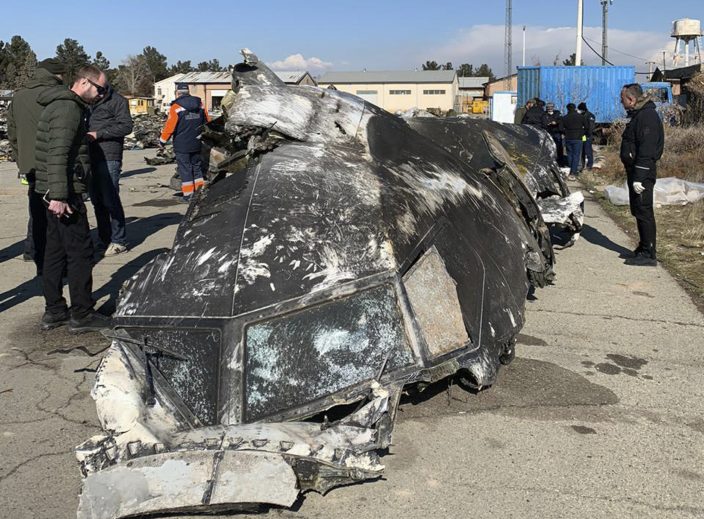 This undated photo provided by the Ukrainian Presidential Press Office, shows the wreckage of the Ukraine International Airlines Boeing 737-800 at the scene of the crash in Shahedshahr, southwest of the capital Tehran, Iran. Iran has acknowledged that its armed forces "unintentionally" shot down the Ukrainian jetliner that crashed earlier this week, killing all 176 aboard, after the government had repeatedly denied Western accusations that it was responsible. (Ukrainian Presidential Press Office via AP)

Fury wins in stunning stoppage of Wilder in heavyweight ...

Coby White is taking his game to n ...