Off-camera and during commercials, the stars at the Screen Actors Guild Awards got to rub shoulders, give congratulatory kisses, and meet for the first or the 50th time. Here are some of the more memorable moments from inside Sunday night's ceremony at the Shrine Auditorium in Los Angeles.

The “Parasite” table was one of the happier places in the Shrine ballroom — and that was before its cast won the night's biggest award. Song Kang Ho and the film's other stars got whoops, whistles and a standing ovation from much of the room of mostly American actors early in the show, when they took the stage to present their nominated film. That was followed by a full-blown ovation at the end, when theirs became the first foreign-language film to win the best ensemble SAG Award. In the two hours between, the gleeful cast and director Bong Joon Ho, savored their moment in the Hollywood spotlight, taking group selfies during every commercial break. They greeted a steady stream of fellow-actor fans, including Steve Buscemi. “I'm a little embarrassed,” cast member Lee Sun Kyun said after the show through a translator. “We're feeling a little like the parasites of Hollywood now." 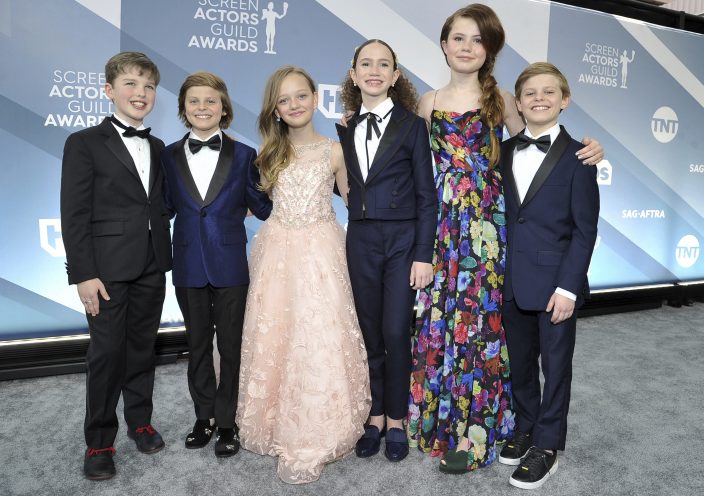 SOME SAG STARS LOOM LARGER THAN OTHERS

TV and movie screens tend to obscure actors' heights, but when they're all in a room together it's very clear who looms over whom. The winners of the show's first two awards for actresses, Phoebe Waller-Bridge and Laura Dern, both reportedly 5-foot-10, made it seem like the night was going to be dominated by the tallest nominees, but the trend ended there. The win of a much shorter Joaquin Phoenix — for “Joker” — over a reportedly 6-foot-3 Adam Driver for best actor in a film was more typical of the night. And the tallest actor and actress in the crowd, Stephen Merchant of “Jojo Rabbit," who stands about 6-foot-7, and Gwendoline Christie of “Game of Thrones,” who stands about 6-foot-3, never got to take the stage with their casts, over whom they towered when they stood up during commercial breaks. 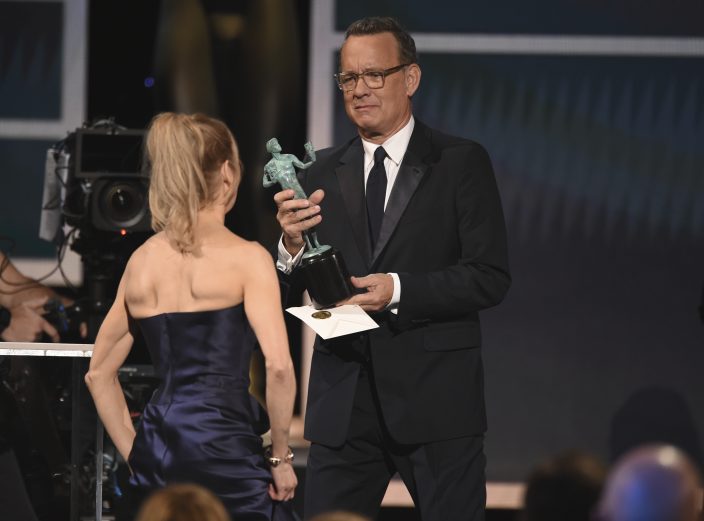 Renee Zellweger, left, accepts the award for outstanding performance by a female actor in a leading role for "Judy" from presenter Tom Hanks at the 26th annual Screen Actors Guild Awards at the Shrine Auditorium & Expo Hall on Sunday, Jan. 19, 2020, in Los Angeles. (PhotoChris Pizzello)

John Lithgow is even taller than Driver, and is nearly 40 years older, but it was Lithgow doing the looking up when the two met for the first time during a commercial break. Lithgow, nominated along with the rest of the cast of “Bombshell,” smiled and gushed to Driver, nominated for best actor for “Marriage Story,” expressing his admiration for Driver's run of recent performances. “Great to meet you Adam,” Lithgow said with enthusiasm as the SAG Awards telecast returned from commercial and Lithgow rejoined Charlize Theron, Margot Robbie and his other cast mates at the neighboring table.

You could be excused for thinking it was Take Our Daughters and Sons to Work day for the professional actors of the SAG Awards. Actually, the wee ones running around the ballroom were acting pros, too, on a night where children abounded among the nominees. The kid actors from “Big Little Lies," including brothers Cameron and Nicholas Crovetti, were all over the ballroom during commercial breaks, taking photos with stars including their cast mates Nicole Kidman and Reese Witherspoon. Twelve-year-old Roman Griffin Davis sat proudly at his table like he utterly belonged alongside his fellow “Jojo Rabbit” cast members, who include Scarlett Johansson. Leonardo DiCaprio politely spoke to a steady stream of people excited to meet him during commercial breaks, but he positively beamed when his 10-year-old “Once Upon a Time ... in Hollywood” co-star Julia Butters, in a shiny silver suit, brought three young friends to meet him. He greeted each of them with a huge grin just moments before he lost out on best actor to Phoenix. 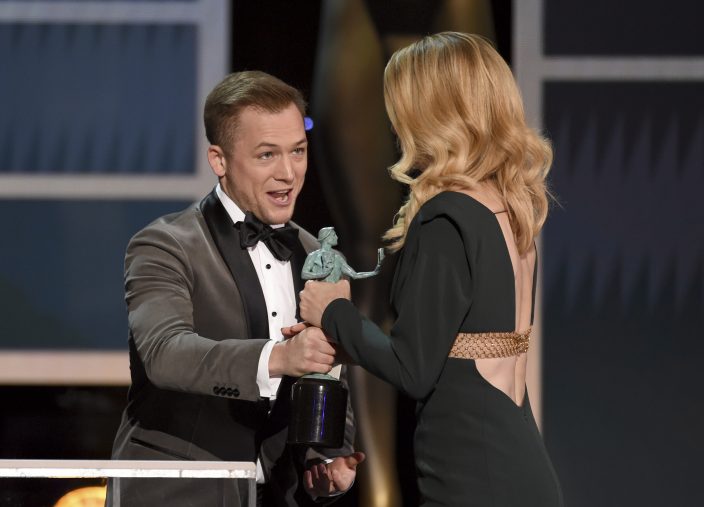 Taron Egerton, left, presents the award for outstanding performance by a female actor in a supporting role to Laura Dern at the 26th annual Screen Actors Guild Awards at the Shrine Auditorium & Expo Hall on Sunday, Jan. 19, 2020, in Los Angeles. (PhotoChris Pizzello)

If anyone inspired more awe in the ballroom than DiCaprio it was Robert De Niro, to whom DiCaprio presented the SAG Life Achievement Award during the ceremony. Many major stars came to pay tribute to De Niro as he sat at a table that included his “The Irishman” co-stars Al Pacino and Harvey Keitel. But when Meryl Streep — his co-star in “The Deer Hunter” more than 40 years ago — stopped by to exchange kisses and kudos, photographers descended in droves and phone cameras came out on all sides to capture the meetup of the pair that many regard as the greatest actor and actress of their generation. 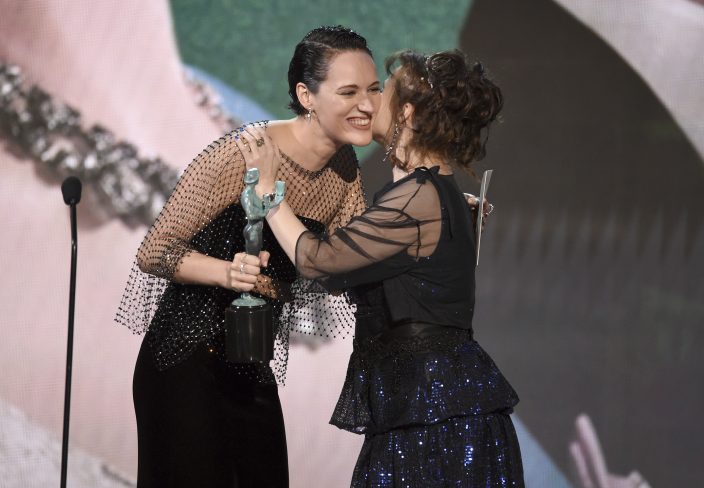 Phoebe Waller-Bridge, left, presents the award for outstanding performance by an ensemble in a drama series to Helena Bonham Carter at the 26th annual Screen Actors Guild Awards at the Shrine Auditorium & Expo Hall on Sunday, Jan. 19, 2020, in Los Angeles. (PhotoChris Pizzello)

Virtually the entire ballroom can see the SAG Awards telecast's teleprompters if they look over their shoulder, and can see who's going off-script. When Ray Romano said while introducing the best ensemble nomination for “The Irishman” that he still couldn't believe he played a mob lawyer opposite De Niro and Keitel, Keitel roasted him by responding “I can't believe it either.” Romano replied, “Hey, that's not up there," pointing at the teleprompter. Romano was right. It wasn't.

Actors usually sit with their cast mates at SAG Awards tables, but sometimes the seating chart yields more novel pairings, like the adjacent placement of Tom Hanks, nominated for “A Beautiful Day in the Neighborhood,” and Renée Zellweger, nominated for “Judy.” The pairing made theirs a popular table for fans and cameras, and it proved prescient. They met up again onstage late in the show, when Hanks handed Zellweger the trophy for best actress in a film. 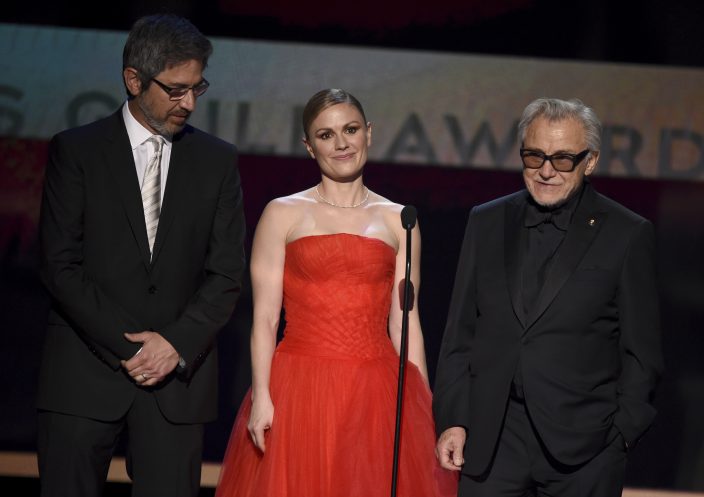 The Japanese economy shrank at an ...