A boy accused of killing four members of a Utah family surrendered peacefully following the Friday night slayings, but has since refused to speak with detectives trying to piece together a possible motive, police said Monday.

Police in the small town of Grantsville released the names of the victims, who ranged from 14 to 52 years old, and said the boy was related to them. But authorities declined to specify the suspect's age, his relation to the victims or release his name at the request of the district attorney until formal charges are filed.

The father of the family was released from the hospital after being treated for a gunshot wound and was talking with investigators, said Police Sgt. Rhonda Fields. She added that the killings were the first homicides in nearly 20 years in the town of 11,000 about 35 miles (55 kilometers) west of Salt Lake City. 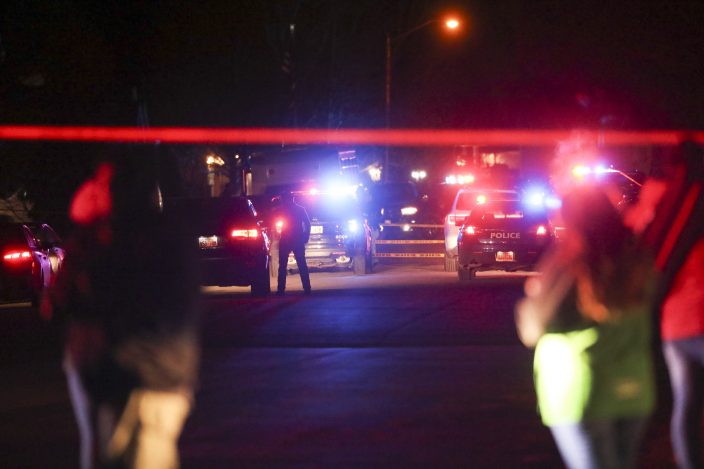 Police investigate after four people were killed and a fifth person was injured in a shooting at a Grantsville, Utah, home Friday, Jan. 17, 2020. The suspected shooter was taken into custody by Grantsville police, the Deseret News reported. Grantsville Mayor Brent Marshall said the victims and the shooter are all related, the newspaper reported. (Steve GriffinThe Deseret News via AP)

“The biggest question everybody has is 'why' and, while we may not be directly able to answer that, we hope to be able to gather some information to be able to help people in future to be able to prevent something like this or offer support to those who may need it," Fields said.

“We don't have a lot of crime," she added. “It's hard to accept that something like this has happened in our community

Investigators were trying to put together a timeline of the shooting to help figure out what happened, Fields said, adding that no other details were being released at this time.

A candlelight vigil for the victims was planned for Monday night at Grantsville City Park.

Relatives of the victims asked for privacy as they awaited results of the investigation. Patty Deakin-Daley, a realtor who started a fundraising campaign to help cover the victims' funeral expenses, said she had been in touch with a brother and a son of the injured father.

“They don't have answers at this point and they may never have the answers they hope to have,” she said.

Police responded to a call of shots fired inside the home at approximately 7 p.m. Friday. When officers arrived, they found the bodies of Consuelo Alejandra Haynie, 52, her daughters Alexis, 15, and Maylan, 14, and son Mathew, 14, Fields said.

The shooter and father Colin Haynie were gone, she said. Authorities later discovered that a person who arrived at the house after the shooting drove the suspect and the surviving victim to a nearby hospital, Fields said.

Authorities said they had not been called to the house in the past.

Officers arrested the boy at the hospital. He was being held at a youth detention facility pending a court appearance.

Officials said he is the only suspect. The person who drove them to the hospital was not involved in shooting, she said.

It appears to be the largest mass shooting in Utah since 2007, when a shotgun-wielding gunman killed five people and himself at Trolley Square mall in Salt Lake City.

Tooele County School District officials planned to offer counseling to students when they return to school on Tuesday. C ounselors will also be at the city library for anyone else in the community who needs to talk about the killings, Grantsville Mayor Brent Marshall said.

Teen accused in fatal family shooting to be charged as adult