Noel Acciari scored with 5.6 seconds left in the third period and the Florida Panthers beat the Minnesota Wild 5-4 Monday night for their fifth straight win.

Acciari tipped a shot from the point by Mark Pysyk that was first tipped by Aaron Ekblad. A video review upheld the goal and gave Florida its first regulation victory in Minnesota. Since a 2001 scoreless tie during the Wild’s inaugural season, Minnesota was 10-0-1 at home against Florida, including seven wins in a row.

Keith Yandle had a goal and three assists, and Aleksander Barkov added a goal and an assist for Florida. Evgenii Dadonov and Vincent Trocheck also scored. Sergei Bobrovsky made 29 saves in his second consecutive start. 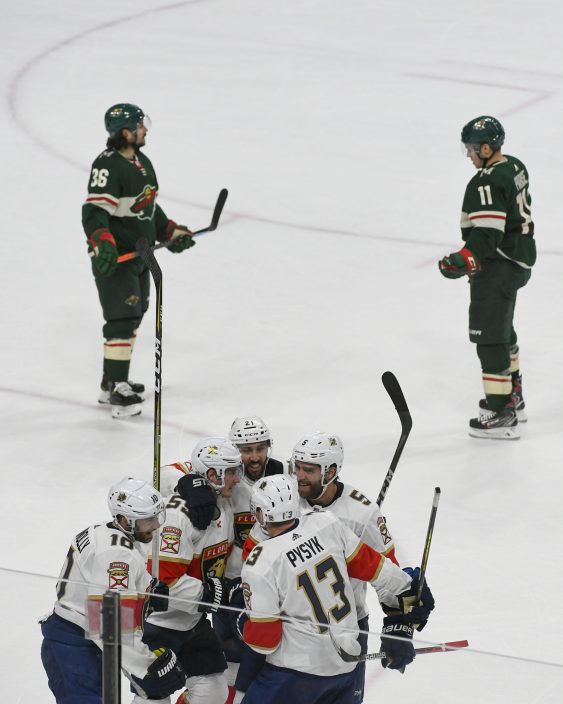 Tyler Bertuzzi, Dylan Larkin and Givani Smith scored for Detroit, which has dropped five in a row (0-4-1). Larkin also had two assists. Jimmy Howard made 40 saves in falling to 2-18-2.

Leading 2-1 early in the third, Kadri helped Colorado put the game out of reach when he and Nieto added goals 53 seconds apart.

After Smith pulled Detroit to 5-3 late in the third, MacKinnon added an empty-netter with 1:00 remaining to seal the win.

Kadri and MacKinnon scored 1:54 apart early in the second to give the Avalanche the lead after Bertizzo put Detroit ahead early in the first.