A retired Minnesota carpenter whom The Associated Press exposed as a former commander of a Nazi-led unit accused of war atrocities has died.

Michael Karkoc, whose family maintained that he was never a Nazi or committed any war crimes, lived quietly in Minneapolis for decades until AP's review of U.S. and Ukrainian records in 2013 uncovered his past and prompted investigations in Germany and Poland. Karkoc died Dec. 14, according to cemetery and public records. He was 100.

His son, Andriy Karkoc, hung up on an AP reporter without confirming his father's death. Officials at the Kozlak-Radulovich Funeral Chapel, which was listed on one website as having handled the funeral arrangements, declined to comment.

FILE - This undated file photo shows Michael Karkoc, which was part of his application for German citizenship filed with the Nazi SS-run immigration office on Feb. 14, 1940. Karkoc, a retired Minnesota carpenter whom The Associated Press exposed as a former commander of a Nazi-led unit accused of war atrocities, died Dec. 14, 2019, according to cemetery and public records. He was 100. His family maintained that he was never a Nazi or committed any war crimes. (U.S. National Archives via AP, File)

But records at Hillside Cemetery in Minneapolis show he was quietly buried there Dec. 19, next to his wife, Nadia Karkoc, who died in 2018. And Minnesota Department of Health records show that a Michael Karkoc with the correct birthday died Dec. 14. The family and funeral home did not publish a public obituary.

Karkoc's involvement in the war surfaced when a retiree who researched Nazi war crimes approached the AP after coming across Karkoc’s name. The AP investigation relied upon a broad range of interviews and documents, including Nazi military payroll information and company rosters, U.S. Army intelligence files, Ukrainian intelligence findings and Karkoc's self-published memoir.

The records established that Karkoc was a commander in the SS-led Ukrainian Self Defense Legion, which attacked a Polish village where dozens of women and children were killed in 1944, then lied to American authorities to get into the U.S. after World War II. 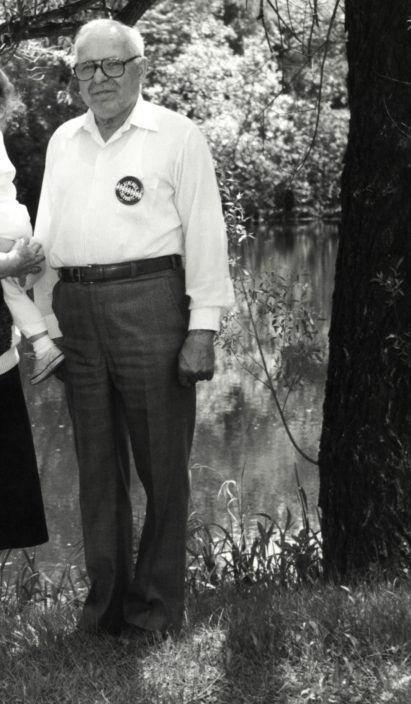 FILE- In this May 22, 1990, file photo, Michael Karkoc stands in Lauderdale, Minn. Karkoc, a retired Minnesota carpenter whom The Associated Press exposed as a former commander of a Nazi-led unit accused of war atrocities, died Dec. 14, 2019, according to cemetery and public records. He was 100. His family maintained that he was never a Nazi or committed any war crimes. .(Chris PolydoroffPioneer Press via AP)

His family denied he was ever at the scene of the attack, though a second AP report uncovered testimony from a former soldier in Karkoc’s unit who said Karkoc ordered his men to attack the village, Chlaniow, in retaliation for the slaying of an SS major.

Andriy Karkoc has said his father was never a Nazi and denied he was involved in any war crimes. He has also questioned the validity of AP’s sources and accused the AP of “defamatory and slanderous” allegations.

Dr. Efraim Zuroff, the top Nazi hunter for the Simon Wiesenthal Center, said he was in no doubt that Karkoc should have been extradited and he called it unfortunate that Poland and the U.S. didn't move more aggressively to do so.

“They seem to have handled this case with a lack of urgency,” Zuroff said in a telephone interview from Israel.

“This is a typical case of a person who joined forces with Nazi Germany and was involved in crimes against innocent civilians, and he didn't deserve the privilege of living in a great democracy like the United States,” he said.

The U.S. Department of Justice didn't immediately respond to an email from The Associated Press on Tuesday asking about the status of Karkoc's case.

An investigative file from the Ukrainian intelligence agency's archive revealed testimony from Pvt. Ivan Sharko, a Ukrainian soldier under Karkoc's command. Sharko testified in 1968 that the initial order to attack Chlaniow was given by another officer, but that Karkoc — who fought under the nom de guerre “Wolf” — told his unit to attack the village.

"The commander of our company, Wolf, also gave the command to cordon off the village and check all the houses, and to find and punish the partisans,” Sharko told authorities in Ukraine in 1967 and 1968, for an investigation they were conducting against the Self Defense Legion.

Sharko, who died in the 1980s, also said the legionaries surrounded homes, set them on fire and shot anyone found inside homes or in the streets, according to the Russian-language investigative file.

“How many people were killed in all, I don't know. I personally saw three corpses of peaceful inhabitants who had been killed,” Sharko was quoted as saying.

Stephen Paskey, who led Nazi investigations for nine years as a prosecutor at the U.S. Department of Justice's Office of Special Investigations, said Sharko’s testimony is highly credible. He noted that Sharko didn’t appear to be in custody or under investigation when questioned, and many of his statements were confirmed by historical documents.

Thomas Will, the deputy head of Germany’s special prosecutors' office that investigates Nazi crimes, concluded in 2013 that there was sufficient evidence that Karkoc was present. In 2017, Polish prosecutor Robert Janicki of the National Remembrance Institute, which investigates Nazi and Communist-era crimes against Poles, said years of investigation confirmed "100%" that he was a commander of the unit.

Karkoc, an ethnic Ukrainian, was born in the city of Lutsk in 1919, according to details he provided to American officials. At the time, the area was being fought over by Ukraine, Poland and others; it ended up part of Poland until World War II. Several wartime Nazi documents note the same birth date, but say he was born in Horodok, a town in the same region.

Karkoc didn’t tell U.S. authorities about his military service when he entered the country in 1949. But in a Ukrainian-language memoir published in 1995, Karkoc said he helped found the Ukrainian Self Defense Legion in 1943, in collaboration with the Nazis' feared SS intelligence agency, to fight on the side of Germany.

He also wrote that he served as a company commander in the unit, which received orders directly from the SS, through the end of the war. The memoir is available at the U.S. Library of Congress and the British Library, and the AP located it online in an electronic Ukrainian library. Karkoc became a U.S. citizen in 1959. He lived for decades in a heavily Eastern European neighborhood of Minneapolis and was a longtime member of the St. Michael's and St. George's Ukrainian Orthodox Church. He worked as a carpenter, and was a member and a secretary in the local branch of the fraternal Ukrainian National Association.

Antin Semeniuk, a friend of Karkoc in Minneapolis, said after the AP’s initial report that Karkoc told him he hadn't been a Nazi. Rather, Semeniuk said, Karkoc described himself as a Ukrainian patriot who wanted his country to be democratic and free of Nazi and Communist rule.