Derek Jeter came within one vote of being a unanimous pick for the Hall of Fame while Larry Walker also earned baseball's highest honor on Tuesday.

It was not immediately known which voter didn't choose Jeter, who was listed on all 219 ballots made public before the announcement. The BBWAA will release additional ballots on Feb. 4 of writers who chose a public listing. 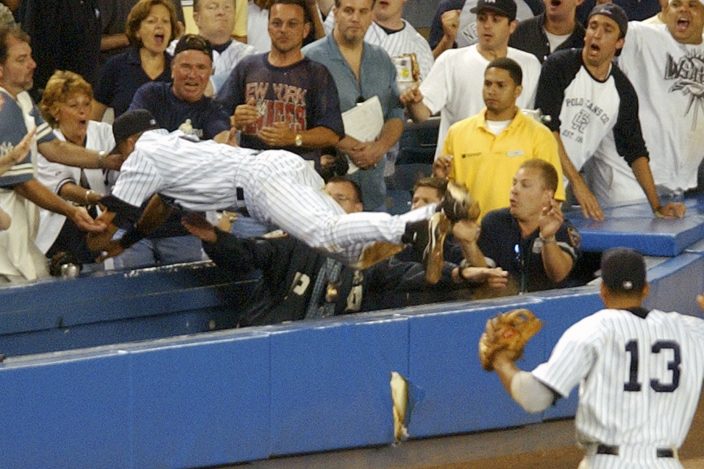 FILE - In this July 1, 2004, file photo, New York Yankees Derek Jeter dives to catch a fly foul ball in the 12th inning during a baseball against the Boston Red Sox at New York's Yankee Stadium. Jeter could be a unanimous pick when Baseball Hall of Fame voting is announced Tuesday, Jan. 21, 2020. (AP PhotoFrank Franklin II)

Jeter and Walker will be inducted on July 26 at the Hall in Cooperstown along with catcher Ted Simmons and former players’ association head Marvin Miller, who were voted in last month by the Hall’s Modern Era Committee. 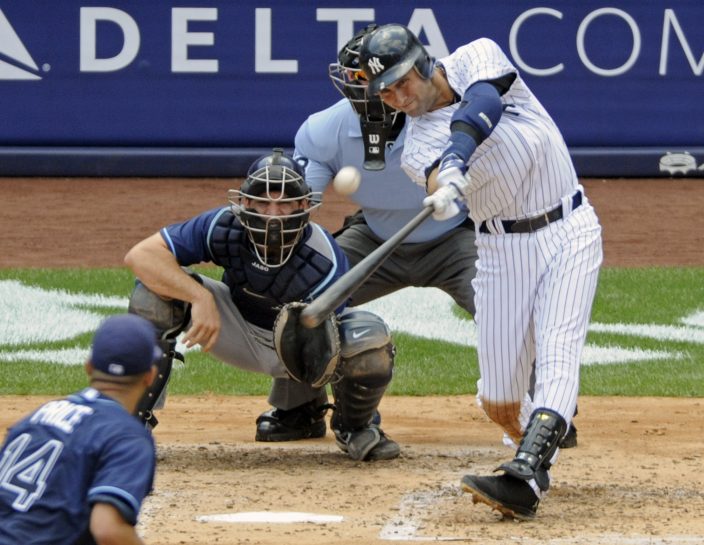 FILE - In this July 9, 2011, file photo, New York Yankees' Derek Jeter hits a home run for his 3,000th career hit during the third inning of a baseball game against the Tampa Bay Rays at Yankee Stadium in New York. Jeter could be a unanimous pick when Baseball Hall of Fame voting is announced Tuesday, Jan. 21, 2020. (AP PhotoBill Kostroun, File)

A five-time World Series champion, Jeter became a face of baseball as he starred in the nation's largest media market from 1995-2014. He was the AL Rookie of the Year award in 1996 as the Yankees won the World Series for the first time since 1978, then led New York to three straight titles from 1998-2000, the only team to accomplish the feat since the 1972-74 Oakland Athletics. A rebuilt Yankees added their 27th title in 2009.

Jeter defined himself by moments more than numbers: his unexpected backhand flip from foul territory to throw out Oakland's Jeremy Giambi in the 2001 AL Division Series; his Mr. November home run in the 10th inning that won Game 4 of the 2001 World Series; his face-first leap into the stands after catching a 12th-inning popup by Boston's Trot Nixon in 2004; a home run into the left-field bleachers for his 3,000th hit as part of a career-best 5-for-5 game in 2011; a ninth-inning walkoff single in his final home game in 2014; a single in his last at-bat three days later that lifted his career average to .310.

Drafted sixth overall in 1992 after he was spotted by Yankees scout Dick Grouch as a high school junior a year earlier, Jeter was bypassed by Houston (Phil Nevin), Cleveland (Paul Shuey), (Montreal (B.J. Wallace), Baltimore (Jeffrey Hammonds) and Cincinnati (Chad Mottola). He debuted for the Yankees on May 29, 1995, and was installed at shortstop the folliowing spring training by new manager Joe Torre. 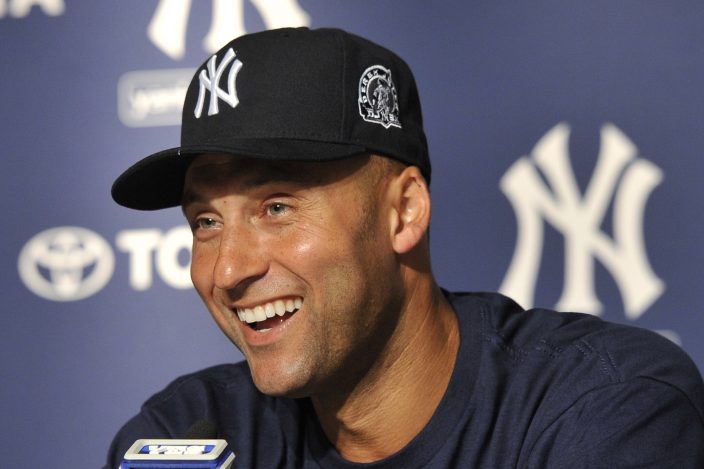 FILE - In this July 9, 2011, file photo, New York Yankees' Derek Jeter smiles as he speaks about his 3,000th career hit at a press conference after a baseball game against the Tampa Bay Rays, at Yankee Stadium in New York. Jeter could be a unanimous pick when Baseball Hall of Fame voting is announced Tuesday, Jan. 21, 2020. (AP PhotoKathy Kmonicek)

Jeter became a 14-time All-Star and five-time Gold Glove winner despite defensive metrics that were maligned. He was appointed captain by owner George Steinbrenner in June 2003, filling a position that had been open since Don Mattingly's retirement after the 1995 season. He finished with 3,465 hits, 260 homers, 358 stolen bases and 1,311 RBIs, earning $266 million from the Yankees.

Jeter used some of his savings to join the group purchasing the Miami Marlins in September 2017, becoming CEO. Jettisoning veterans and going with low-priced youth in a way the Yankees never did, Jeter endured a pair of last-place finishes and the lowest home attendance in the major leagues. 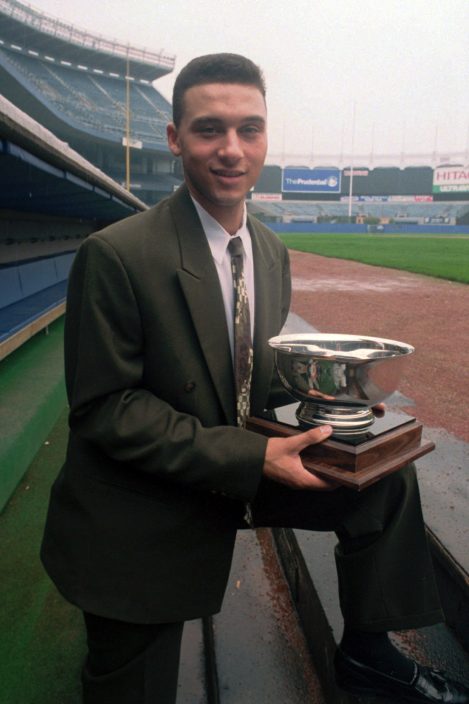 FILE - In this Sept. 14, 1994, file photo, New York Yankees prospect Derek Jeter poses on the dugout steps at Yankee Stadium in New York, where he was named Baseball America's minor league player of the year. Jeter could be a unanimous pick when Baseball Hall of Fame voting is announced Tuesday, Jan. 21, 2020. (AP PhotoMark Lennihan)

Evaluating his offensive performance gave some baseball writers difficulty because he spent 9 1/2 seasons hitting at home in the thin air of Denver's Coors Field. Walker batted .381 with an 1.172 OPS and 154 home runs in 597 games at Coors and .282 with 229 homers and an .873 OPS in 1,391 games elsewhere, according to the Elias Sports Bureau. 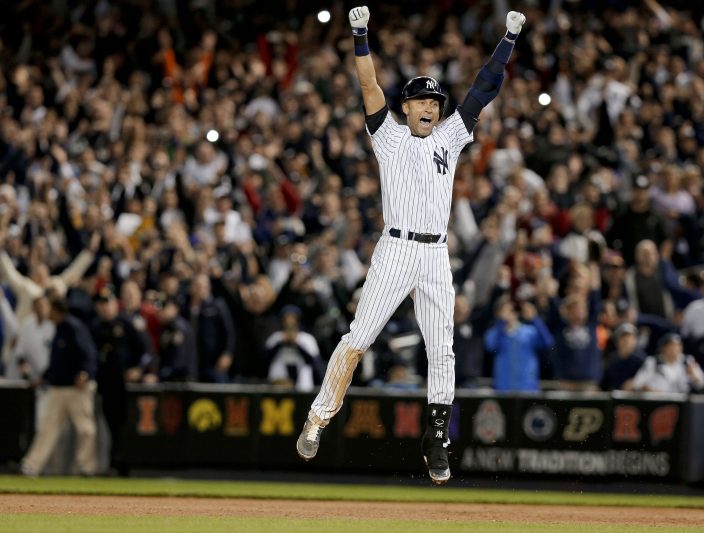 FILE - In this Sept. 25, 2014, file photo, New York Yankees' Derek Jeter jumps after hitting the game-winning single against the Baltimore Orioles in the ninth inning of a baseball game, in New York. Jeter is among 18 newcomers on the 2020 Hall of Fame ballot. On Tuesday, Jan. 21, the Baseball Writers' Association of America will announce the results of its 2020 Hall of Fame balloting. (AP PhotoJulie Jacobson, File)

Walker became the second Canadian-born player elected to the Hall after Ferguson Jenkins in 1991.

Ballot holdovers could benefit next year, when the most prominent players eligible for the first time are Torii Hunter and Mark Buehrle. The 2022 ballot will include David Ortiz and Alex Rodriguez, who served a season-long suspension in 2014 for violations of the drug program and baseball's collective bargaining agreement. 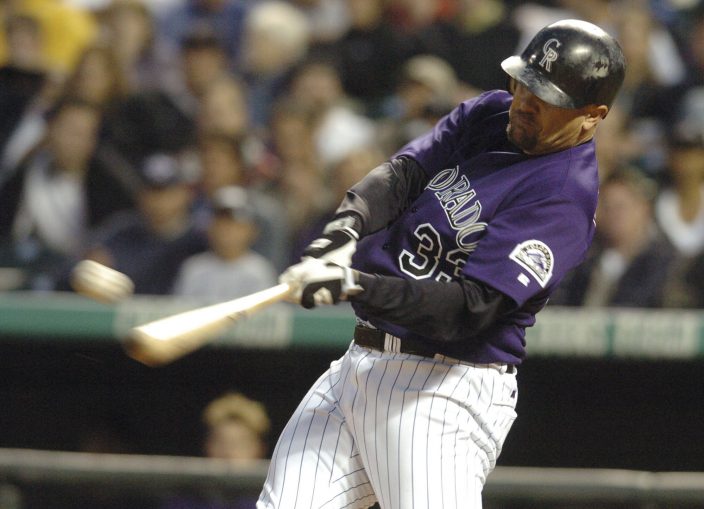 FILE - In this Wednesday, June 30, 2004 file photo, Colorado Rockies' Larry Walker connects for a double on a pitch from Milwaukee Brewers starting pitcher Ben Sheets in the fourth inning in Denver. Derek Jeter came within one vote of being a unanimous pick for the Hall of Fame while Larry Walker also earned baseball's highest honor on Tuesday, Jan. 21, 2020. (AP PhotoDavid Zalubowski, File)

When it comes to unanimous Hall picks, Jeter could be No. 2.

Divac leads Class of 2019 into Basketball Hall of Fame

Divac, Sikma are centers of attention at Hall of Fame

Goosen, Stephenson among 5 new members of golf Hall of Fame