Highlights of Tuesday's session and what's ahead as senators conduct just the third impeachment trial of a president: 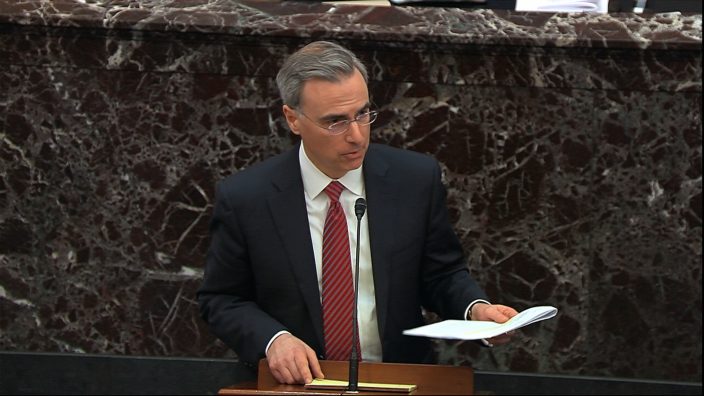 In this image from video, White House counsel Pat Cipollone speaks against a amendment offered by Senate Minority Leader Chuck Schumer, D-N.Y., during the impeachment trial against President Donald Trump in the Senate at the U.S. Capitol in Washington, Tuesday, Jan. 21, 2020. (Senate Television via AP)

A proposal by Senate Majority Leader Mitch McConnell would have imposed a tight two-day schedule for opening arguments by each side. The plan, an apparent bid by McConnell to get the trial moving quickly, also would have forced senators to vote affirmatively to consider evidence compiled by the House during its impeachment proceedings.

The proposal drew immediate protests from Democrats, and some Republicans made their concerns known in private during a GOP lunch. The initial plan, they argued, would have helped Democrats cast Republicans as squeezing testimony through in the dead of night.

McConnell quickly added an extra day for opening arguments and stipulated that evidence from the House proceedings be included in the record. 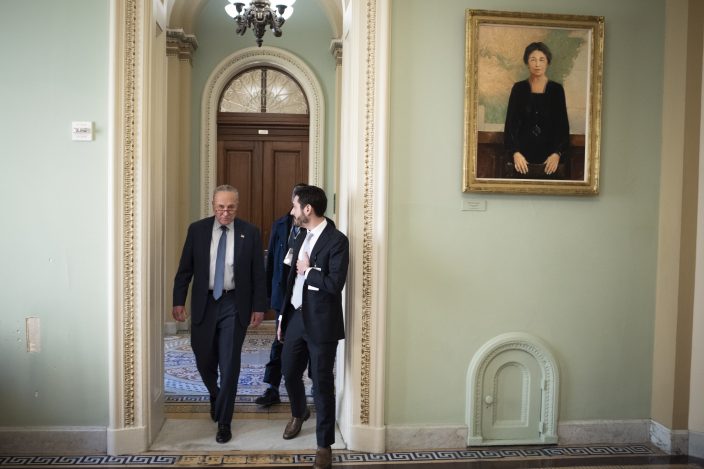 Trump, attending a global leaders conference in Davos, Switzerland, made his feelings about impeachment clear. “READ THE TRANSCRIPTS!” he tweeted from overseas. The tweet referred to a rough transcript of Trump's phone call in which he asked new Ukrainian President Volodymyr Zelenskiy for “a favor.”

Senate Democratic leader Chuck Schumer of New York offered the first amendment to the rules — a proposal to issue a subpoena to the White House for “all documents, communications and other records” relating to the Ukraine matter. In a likely prelude to other Democratic requests, Republicans promptly rejected Schumer's amendment on a 53-47, party-line vote.

Amid the partisan back and forth, House prosecutors and White House lawyers offered initial arguments. Rep. Adam Schiff, D-Calif., the chairman of the House Intelligence Committee and lead prosecutor, said the rules package proposed by McConnell was “a process for a rigged trial” and a ”cover-up.”

Schiff and other Democrats cite the White House transcript as evidence of Trump's political pressure campaign on Ukraine, although the president repeatedly describes the call as “perfect.”

NO CRIME, NO IMPEACHABLE OFFENSE

Trump's legal team does not dispute his actions in the July 25 call. But White House Counsel Pat Cipollone, the president's lead lawyer, said the charges against the president don't amount to impeachable offenses and that Trump committed no crime. They also say there's no evidence that aid to Ukraine was tied to a request for an investigation of Biden and his son Hunter, a former board member of a Ukrainian gas company.

"Just because the House proceedings were a circus that doesn’t mean the Senate’s trial needs to be,” tweeted Sen. Lamar Alexander, R-Tenn. He supports holding a vote after hearing arguments on both sides to determine whether additional witnesses or documents should be considered by the Senate.

More legal skirmishes are expected Wednesday, and White House lawyers may move to call for the case to be dismissed, although it was not clear if they planned to pursue that option. Some Republicans have said they would oppose a dismissal vote.

Absent another unexpected delay, opening arguments by both sides are likely to resume.

Tewkesbury family uses boat to get to and from home ami ...

Bounce back: MLB veterans to watch in spring games

A lawyer for the captain of a carg ...