A man with a sledgehammer pounded at the bust of his country's former leader adorning a huge sports stadium that his government had built and named after the then long-reigning president. Ministers from the current government applauded as the head came down.

It was a scene reminiscent of some nations after the fall of the Soviet Union, but it was taking place in the Bolivian city of Cochabamba and the object of the battering was former President Evo Morales.

Morales fled Bolivia in November after losing the support of the military and police amid widespread protests over a disputed election. His supporters called it a coup. Opponents say he was forced from power after manipulating the constitution to run for a fourth term in office then seeking to win that vote with electoral fraud. 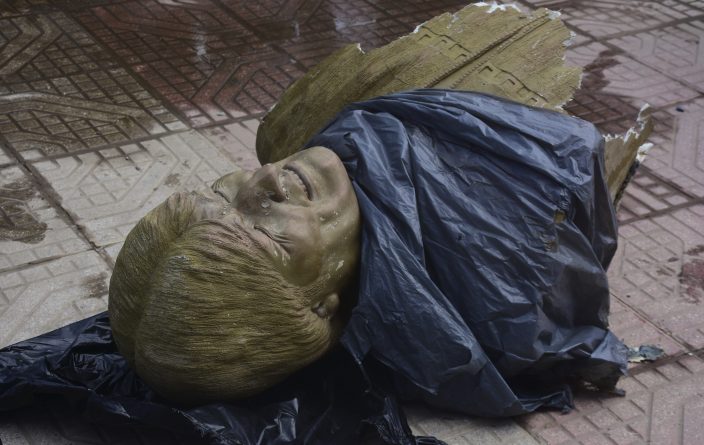 In this Jan. 13, 2020 photo, the destroyed bust of Bolivia's former President Evo Morales, lies on the ground after it was knocked down on the orders of Bolivia's sports minister, outside a sports center in Cochabamba, Bolivia. The sports center, which used to be named after the former president but the new government has changed its name to Quillacollo after its location. (Daniel JamesLos Tiempos via AP)

Across Bolivia, the government of interim President Jeanine Áñez is taking down statues, painting over murals, renaming soccer fields and stadiums, and trying to erase the legacy of Morales, who governed this Andean country for more than 14 years as its first indigenous president.

Áñez accuses Morales and his party of creating a “personality cult” around him, even building a museum dedicated to the then leader's life and presidency.

But while the toppling of the statues of former leaders has often been greeted by broad social consensus in other countries, it is facing backlash in Bolivia, where Morales still has supporters, especially among the indigenous. They say his removal is a bid to wrest power from Bolivia's indigenous majority and return it to the traditional elite. 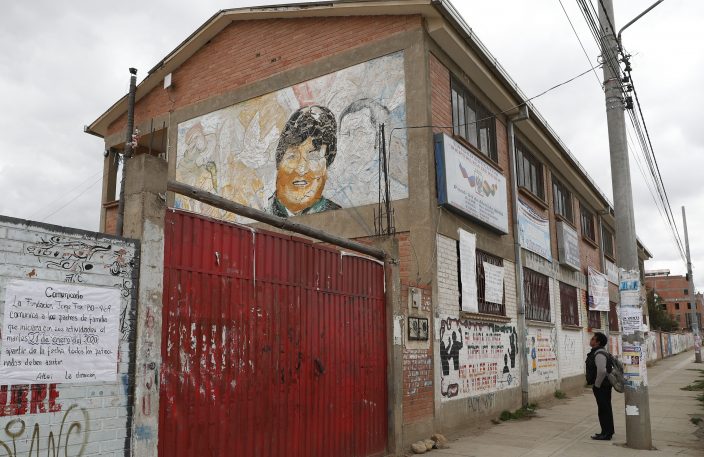 In this Jan. 18, 2020 photo, a man looks at a mural of Bolivia's former President Evo Morales painted on a wall of the Republic of Russia school in El Alto, Bolivia. While attempting to erase the images and statues of hated former leaders is often greeted by broad social consensus in other countries, it is facing backlash in Bolivia where Morales still has supporters, especially among indigenous peoples. (AP PhotoJuan Karita)

"I do not agree with the name change because in the end the name does not harm anyone," said Robin Higueras, expressing her opposition to removing “Evo Morales” from the name of the sports venue where she coaches young soccer players in La Paz's neighboring city of El Alto.

María Teresa Zegada, a sociologist and political analyst, said this is the first time such a dismantling of a former leader's image has occurred in Bolivia, because “we had never had anything so structured” before. No president in Bolivia's history governed for as long as Morales did.

“The images of Morales weren't accidental. They were focused on sustaining the strongman regime promoted by his ruling party," Zegada said of the omnipresence of his image in Bolivia. “History has shown us at the world level that this happens with authoritarian governments, be they populism from the left or right. They end badly.” 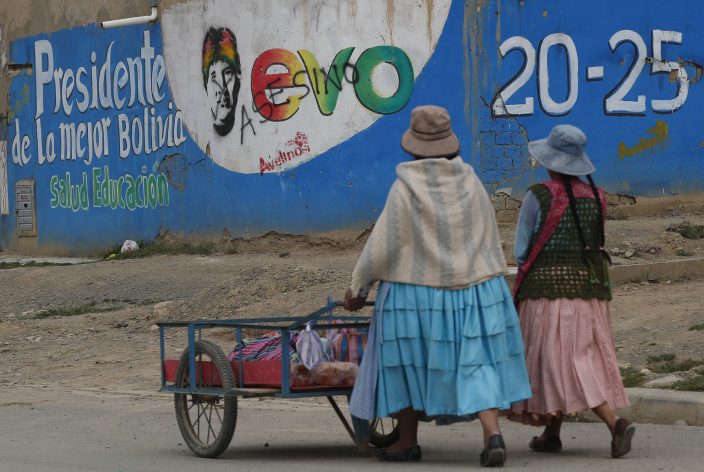 In this Jan. 18, 2020 photo, women walk past a mural promoting the re-election of Bolivia's former President Evo Morales, in El Alto, Bolivia. "The images of Morales weren't accidental; they were focused on sustaining the strongman regime promoted by his ruling party," sociologist and political analyst Maria Teresa Zegada said of the omnipresence of the ex-leader's image in Bolivia. (AP PhotoJuan Karita)

In Cochabamba, the bust at the entrance to the ”Evo Morales" sports venue was destroyed last week. The venue's name will be changed to “Quillacollo,” after its location.

Sports Minister Milton Navarro was among those who helped topple the statue of Morales. Several people stepped on the fallen bust with their feet as it lay the ground.

"We want to go against the idolatry of Morales," said Navarro. “He was corrupt, a dictator. Sports fields cannot bear the name of someone like that.” 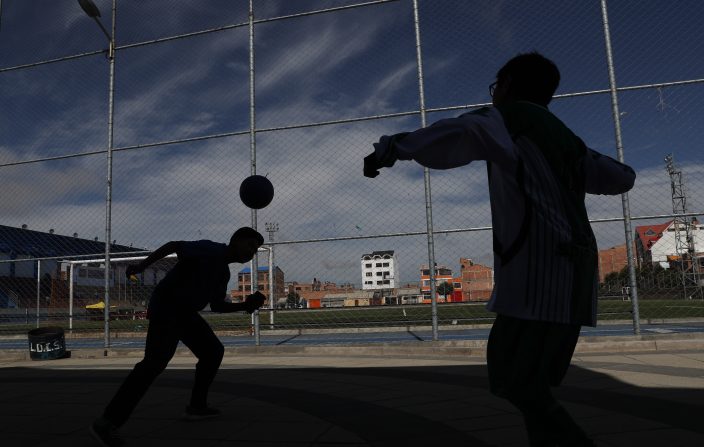 In this Jan. 18, 2020 photo, youths are silhouetted as they play with soccer ball at a sports complex in El Alto, Bolivia. In 2007, former President Evo Morales launched a program called "Bolivia Changes, Evo Comes Through," which was initially financed by donations from then-Venezuelan President Hugo Chavez and later maintained with state resources. Morales - who is a soccer player and fan - used the money to build soccer fields, sports centers, schools and hospitals. (AP PhotoJuan Karita)

Following a decree signed Monday by Bolivia's current president, the stadium is just one of many venues that will stop bearing the name of the former president. Navarro said they will no longer be used for political events or speeches.

Áñez argues that Morales used sports as a way to campaign continuously.

In 2007, Morales launched a program known as “Bolivia Changes, Evo Comes Through,” which was initially financed by donations from then-Venezuelan President Hugo Chávez and later maintained with Bolivian state resources. 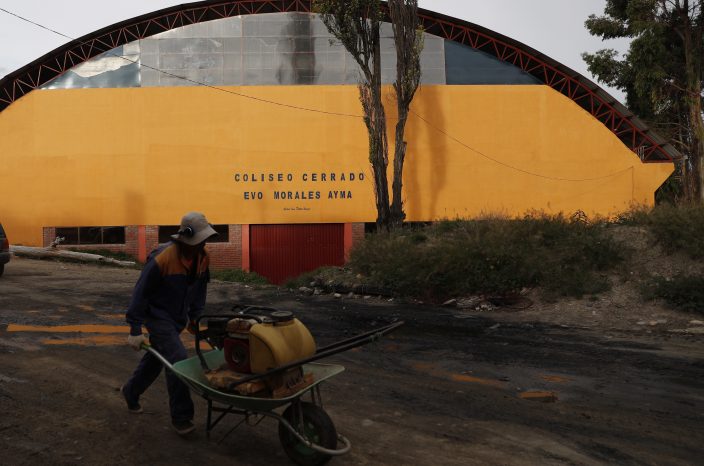 In this Jan. 20, 2020 photo, a man pushes his wheelbarrow in front of a sports coliseum named after Bolivia's former President Evo Morales, in Achocalla, Bolivia. During his administration Morales would often personally inaugurate the fields and venues, playing a soccer game against local officials. (AP PhotoJuan Karita)

Morales, a soccer player and a fan, used the money to build soccer fields, sports centers, schools and hospitals. He even created youth soccer programs bearing his name. In his 2018 presidential report, Morales said that 1,763 sports field had been built in 10 years under the program.

Morales would often personally inaugurate the fields by playing soccer against local officials. In 2008, he played with Argentine star Diego Maradona at the Hernando Siles stadium in La Paz.

Upon hearing what was happening at the Cochabamba stadium, Morales tweeted from his self-exile in Argentina: “When they destroy the bust with my image, they will be trying to make the popular indigenous movement disappear.” 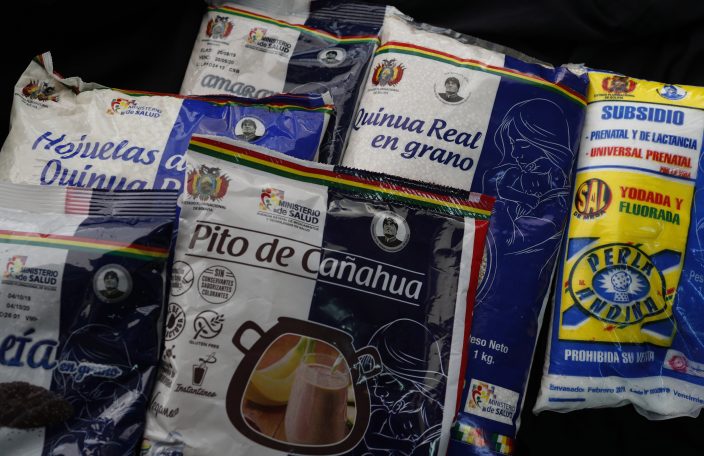 In this Jan. 21, 2020 photo, packages of government subsidized food emblazoned with an image of Bolivia's former President Evo Morales, are displayed in La Paz, Bolivia. With the same fire that his successor now tries to erase his name, Morales did everything to put his image and name into the most unexpected corners of Bolivian homes. Like these food packages that still bear his image. (AP PhotoJuan Karita)

Bertha Quispe's poor neighborhood in El Alto has a soccer field with synthetic turf that was built under Morales. She doesn't like the government moving to erase his image.

Morales resigned the presidency when the police and army withdrew support after several weeks of demonstrations that erupted over allegations of fraud in the Oct. 20 election that Morales claimed to have won. The Organization of American States said its audit found serious irregularities in the vote count. An interim government took over and annulled the October election, scheduling new national elections for May.

With the same fire that his successor now tries to erase his name, Morales did everything to put his image and name into the most unexpected corners of Bolivian homes. Some salt packages still bear his image as well as products that mothers receive free in state handouts.

Navarro, the sports minister, said this is why Bolivia's interim president extended her campaign beyond sports stadiums. Morales'' image has also been ordered removed from computers given to teachers and from youth soccer jerseys. Its use by high government officials for public works is also prohibited.

“The followers of Evo Morales have to worship him, tie the laces of his shoes, find him diversion in his free time, write songs and hymns for his rejoicing,” said Áñez. “I am certain that with this decree we are go to stop this personality cult.”

Mired in a run of one playoff appe ...