Tennys Sandgren was looking in great shape for a big upset at the Australian Open after building a massive lead against No. 8 seed Matteo Berrettini on Wednesday.

And then, suddenly, he wasn't.

“Two-sets-to-love up, I was feeling pretty good about myself,” the 100th-ranked Sandgren, who is from Tennessee, said about the second-round match, “but playing such a great player, that can get erased pretty quick — and I guess it did.” 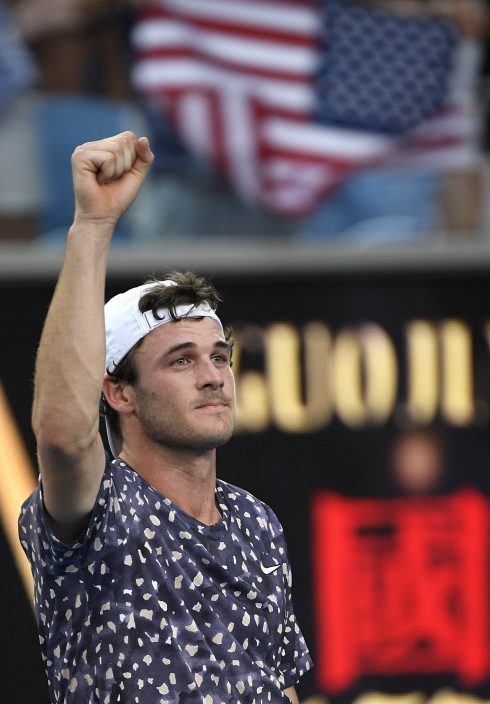 Tommy Paul of the U.S. celebrates his win over Bulgaria's Grigor Dimitrov in their second round singles match at the Australian Open tennis championship in Melbourne, Australia, Wednesday, Jan. 22, 2020. (AP PhotoAndy Brownbill)

Sure did. Same thing happened to another American: The 80th-ranked Tommy Paul, who was born in New Jersey and now is based in Florida, took the opening two sets against No. 18 seed Grigor Dimitrov before seeing that lead vanish, too.

In the end, though, the two Americans managed to finish the job and produce five-set upsets of opponents who were semifinalists at last year's U.S. Open. 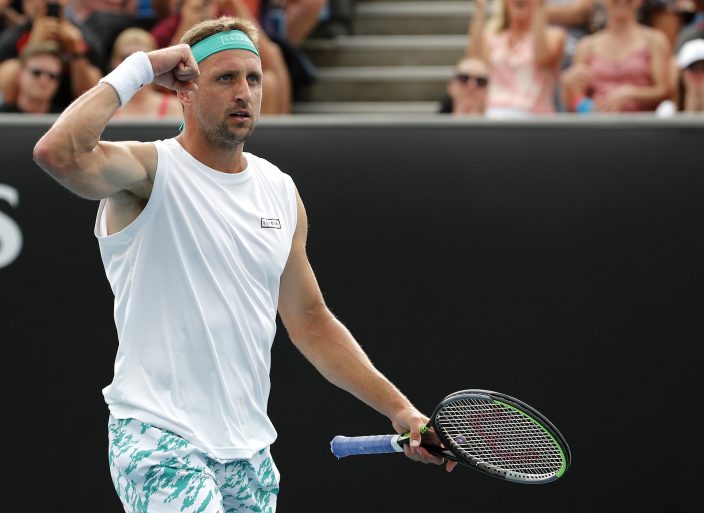 Paul seemed to be fading, after playing four sets in a rain-delayed match Tuesday. But the 22-year-old who won a French Open junior title picked up his first five-set victory; he hadn't won a Grand Slam match of any length until this week.

When the sleeveless Sandgren completed his win, he flexed his right biceps. 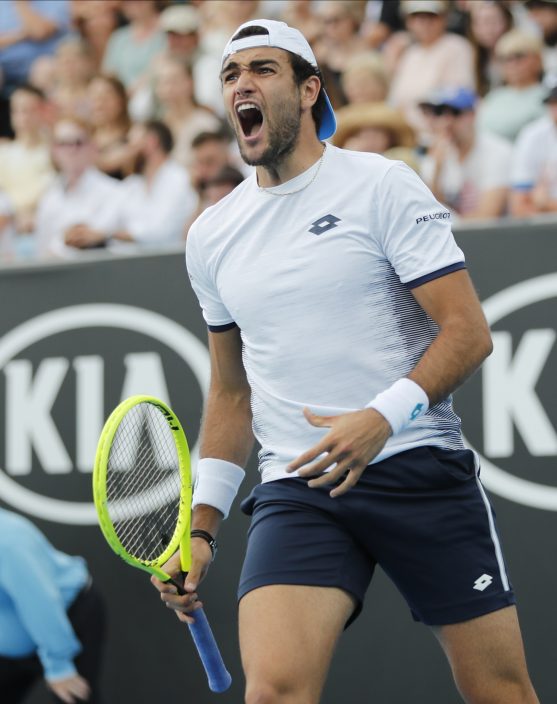 Italy's Matteo Berrettini reacts after winning a set against Tennys Sandgren of the U.S. during their second round singles match at the Australian Open tennis championship in Melbourne, Australia, Wednesday, Jan. 22, 2020. (AP PhotoAndy Wong)

Sandgren improved to 4-0 in five-setters. It was also the fourth top-10 win of his career; two of the others also came at Melbourne Park, back in 2018, when Sandgren reached the quarterfinals for his best showing at a major tournament.

Up next for him is an all-American matchup against Sam Querrey, with a berth in Week 2 on the line. They played in the fourth round at Wimbledon last year, with Querrey coming out on top.

“It's great when an American, for sure, will get through,” Sandgren said. 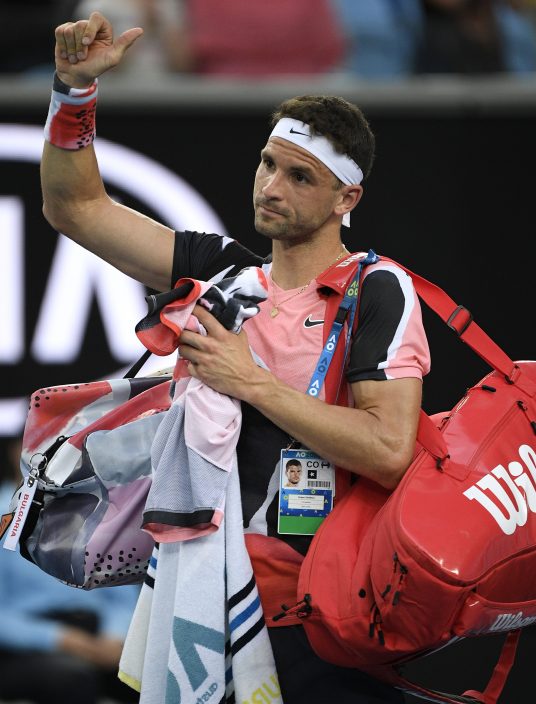 Bulgaria's Grigor Dimitrov gestures to the crowd as he leaves the court following his second round loss to Tommy Paul of the U.S. at the Australian Open tennis championship in Melbourne, Australia, Wednesday, Jan. 22, 2020. (AP PhotoAndy Brownbill)

Caroline Wozniacki surmised that she knew exactly what her second-round opponent was up to with a late-match medical timeout: The interruption was more about gamesmanship than a need for treatment from a trainer.

“Obviously,” Wozniacki said afterward, “she tried to break my rhythm. ... I don't think there (was) anything wrong. She was running just fine. So that's a trick that she's done before, and I knew that it was coming.” 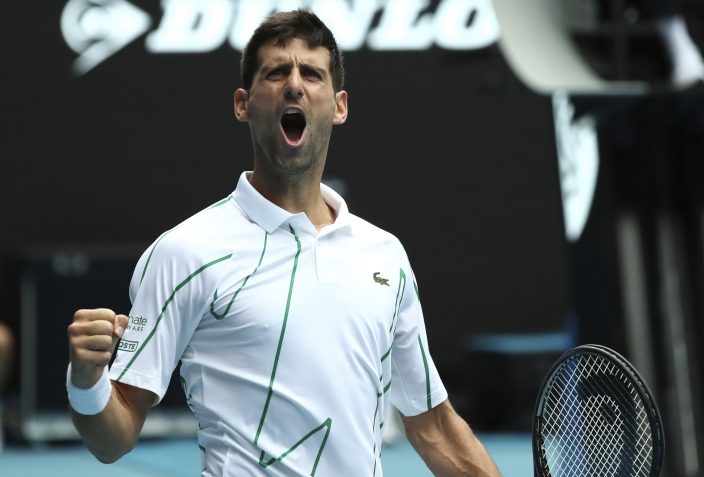 If Wozniacki was right — not surprisingly, the 23rd-seeded Dayana Yastremska denied that's what was going on, saying she had hip problems — the tactic only delayed, but did not alter, the end result.

Wozniacki needed six match points to finish it, but she did finish it, beating Yastremska 7-5, 7-5 to prolong a career she said will be done as soon as her run in the Australian Open is.

Wozniacki, the 2018 champion at Melbourne Park and a former No. 1, started about as poorly as possible Wednesday, falling behind 5-1. 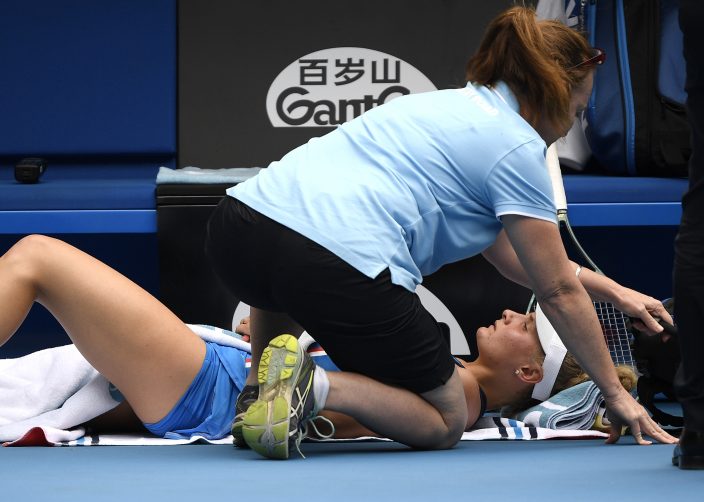 Dayana Yastremska of Ukraine receives treatment from a trainer during her second round singles match against Denmark's Caroline Wozniacki at the Australian Open tennis championship in Melbourne, Australia, Wednesday, Jan. 22, 2020. (AP PhotoAndy Brownbill)

“She came out swinging ... and everything was going in, even balls that I don't think she knew were possible to hit it that way,” Wozniacki said. “I was just thinking to myself, 'It surely can't continue. If it's going to continue, then there is not much I can do out there.' But, you know, then she started making errors.”

Something similar played out in the second set, which Yastremska led 3-0 before faltering.

Novak Djokovic has never been a big fan of playing tennis with wind whipping around. It messes with his ball control. Still, a heavy breeze Wednesday was no trouble at all for the Australian Open's defending champion Wednesday.

“I don't think players enjoy these kind of conditions, to be honest. It is what it is. You have to accept them and embrace the fact that you're going to ... be challenged on different levels, not just by your opponent, but also the conditions," said Djokovic, who's eyeing a record eighth championship in Melbourne and 17th major title overall. “That's OK. I accepted it.”

Carla Suarez Navarro is still waiting for a ruling on her appeal of the $40,000 fine she was handed at the U.S. Open for what was called a lack of effort.

In the meantime, competing in what she has said is her final season, the 31-year-old Suarez Navarro certainly showed off her best during a 7-6 (6), 7-6 (6) first-round win over 11th-seeded Aryna Sabalenka at the Australian Open.

The Spaniard, a three-time quarterfinalist in Melbourne, said she tried her best against Timea Babos in the first round at Flushing Meadows last year while seeded 28th. Suarez Navarro said Wednesday that she was “ready to win, but I had to retire” in New York, citing a lower back injury, after dropping the initial set.

U.S. Open tournament referee Soeren Friemel said at the time that Suarez Navarro "did not perform to the required professional standards" and so was punished for violating the first-round performance rule intended to deter players who enter tournaments while injured from quitting during matches.

Suarez Navarro also had retired from a match at a hard-court tournament in Toronto earlier that month.

Germany sweeps medals at home at men's skeleton wo ...

The landmark Jewish museum in Pola ...

Australian Open heats up, right in in time for semifinals

Navratilova sorry for protocol breach, not for Court protest

It's Barty time at Australian Open; local hope is into semis

First for Jabeur as she reaches quarterfinals in Australia