Egypt, Ethiopia and Sudan started U.S.-monitored talks on Wednesday in the Sudanese capital to try hammer out a draft deal to resolve their dispute over a Nile dam that Ethiopia is constructing, an Egyptian spokesman said.

The $4.6 billion Grand Ethiopian Renaissance Dam project on the Blue Nile, which promises to provide much-needed electricity to Ethiopia’s 100 million people, has been a contentious point among the three main Nile Basin countries.

The issue is critical for Cairo as Egypt seeks to protect its main source of freshwater for its large and growing population, also about 100 million. 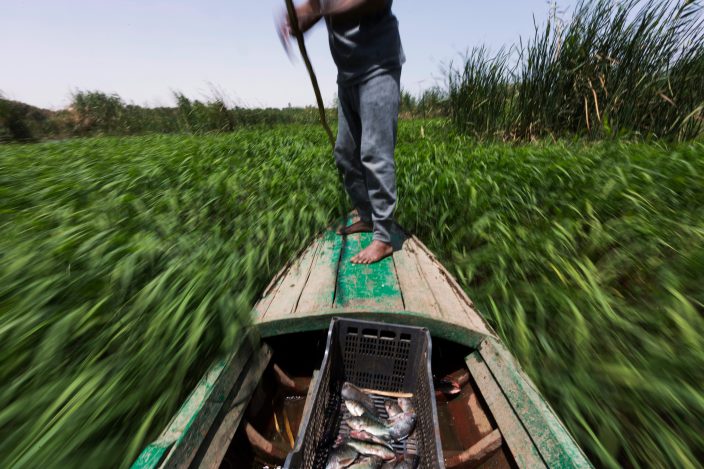 FILE - In this April 12, 2015 file photo, Sayed Ahmed Abdoh poles his boat to check his fish traps in the Nile River, near Abu al-Nasr village, about 770 kilometers (480 miles) south of Cairo, in Egypt. Two days of negotiations between top officials from Ethiopia, Egypt and Sudan were hoped to reach agreements on technical issues related to the $4.6 billion dam Ethiopia is building on the Nile River, but the talks concluded Thursday, Jan. 9, 2020 without an agreement. (AP PhotoHiro Komae, File)

The Blue Nile flows from Ethiopia into Sudan where it joins the White Nile near Khartoum, to form the Nile River. Eighty-five percent of Nile waters originate in Ethiopia from the Blue Nile, which is one of the Nile’s two main tributaries.

According to Muhamed el-Sebai, a spokesman for Egypt’s irrigation ministry, technical and legal teams from the three countries are to “prepare a draft deal" on how the dam's reservoir would be filled and how the dam itself would operate.

The meeting in Khartoum would last two days, he said. There was no immediate indication on whether it would succeed after several previous rounds of talks failed. But at the talks in Washington last week, the three countries said they had reached a preliminary agreement.

The U.S. and World Bank are acting as observers at the Khartoum talks after Egypt’s President Abdel Fattah el-Sissi last year pleaded with Washington and the international community to mediate a solution for the years-long dispute.

Egypt claims that filling the dam’s reservoir too quickly could significantly reduce its share of the Nile water. A joint statement after the Washington meeting said the filling should occur in stages during the rainy season, which generally runs from July to August, thought it did not give details on how long it would take to be completed.

Another two-day meeting in Khartoum is planned for next week, with the goal of reaching a final agreement.

The mega-dam, now about 70% complete, will generate about 6,400 megawatts once it's finished, more than doubling Ethiopia’s current production of 4,000 megawatts. Ethiopia said the dam will not be completed until 2022, more than four years behind schedule, because of faulty parts in the hydro-electrical plant’s equipment.

The highway that links the Syrian ...