López Obrador, a leftist who throughout his campaign talked about protecting human rights and more respectful treatment of migrants, has taken some criticism from the left, even from within his own party, for Mexico’s more militarized reception of migrants who arrived at the Guatemala-Mexico border last weekend.

But in a two-hour news conference Thursday he was not asked once about the caravan or the government’s response even as news emerged that hundreds of migrants had crossed the border and were walking up a Mexican highway. 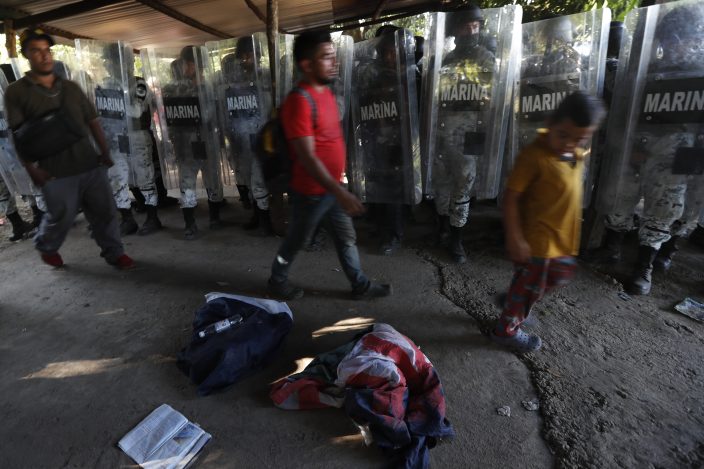 López Obrador has been criticized for carrying out U.S. President Donald Trump’s bidding by more aggressively trying to stop migrant caravans. The pressure applied on Mexico's government to do more to contain immigration comes more from the U.S. government than anyone within Mexico.

On Wednesday, federal lawmaker Porfirio Muñoz Ledo, a member of López Obrador’s party, was kept from speaking in Mexico’s Chamber of Deputies about the National Guard’s clash with migrants at the border Monday. Members of his own party blocked him from showing video of the confrontation during a hearing.

Via Twitter, Muñoz Ledo termed Mexican authorities’ actions “savage aggression” and said it violated the country's constitution and international treaties it had signed.

Last year, López Obrador's first head of the National Immigration Institute — an academic and specialist in immigration — stepped down after Mexico bent to Washington's pressure.

Coming from a country with a long history of emigration, Mexicans generally have a great deal of empathy for the Central American migrants passing through the country. During the first caravans in 2018, townspeople turned out along the caravan’s path to provide food and water. But as more caravans came the attitude began to change, especially in places that had few resources to begin with.

For many Mexicans, migration had been a quiet reality. Small groups of people were always passing on their way north. People who lived along the train tracks the migrants walked on talk about providing a plate of food or assistance in an emergency.

But the caravans are different. Thousands of people suddenly descend on a sleepy town and set up camp in the town square. When there were complaints about the garbage left behind, caravans organized and designated people to clean up, chiding members to be considerate of their hosts.

Claudia Zamora, 46, who operates a small roadside stand near Frontera Hidalgo, reflected the mixed attitude. She described the caravans’ passing as “chaos,” and on Thursday was pulling her racks of chips inside ahead of the caravan’s arrival. But she quickly added, “there must be a very strong motivation to emigrate. They don’t bother me. If they come with good intention to work then God Bless Them.”

They had never stolen anything from her and often stopped to buy water or cigarettes and rest in the rare shade offered by a couple trees next to her stand.

In Ciudad Hidalgo, the caravans have drawn a security response. Many in Ciudad Hidalgo, like any border town, live from cross-border commerce. Many residents expressed frustration in recent days with the caravan, because it prompted Mexican authorities to shut down the international bridge, preventing people from crossing. Plenty of informal raft crossings of commerce continued, but many Guatemalan locals from Tecun Uman accustomed to crossing at will for work, to shop or see family were stopped by immigration officials on the riverbank and told to go back.

“Yes, I see it as bad, but it's the result of bad decisions from previous governments,” Serrato said. He sees the actions as a necessary evil. “Yes, there are good people who want to work, but people with bad intentions also come.”