Mississippi's new governor says he and the i nterim corrections commissioner toured a troubled state prison to see conditions and to try to understand what led to an outburst of deadly violence in recent weeks.

Gov. Tate Reeves said Thursday that he and the commissioner, Tommy Taylor, also toured an empty prison that the state owns. The Republican governor, who took office Jan. 14, said it's possible that the state could move some inmates into the empty prison in the central Mississippi town of Walnut Grove.

That prison was previously managed by a private company, and Reeves said it could be again. But he said no plans have been made to move prisoners and no timeline is set. 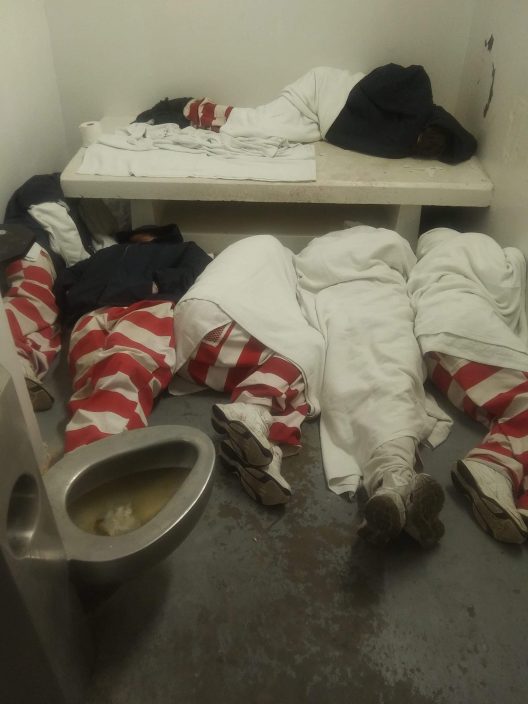 This undated photo taken by an inmate at Mississippi State Penitentiary at Parchman and provided to The Associated Press shows inmates seen lying on the floor next to a full toilet. After violence at the prison on Jan. 2, 2020, guards and state troopers marched some prisoners at Parchman into Unit 32, a cell block closed in 2011 as part of a settlement; the inmate says the unit has no running water or mattresses, and is plagued by mold and issues. (Courtesy photo via AP)

“We know that there are problems in the system,” Reeves said. “We don't want to hide them. We want to fix them.”

At least 10 inmates have died in Mississippi prisons since late December, most of them in violent confrontations at the Mississippi State Penitentiary at Parchman — one of the prisons Reeves and Taylor toured. Prison officials have attributed some of the violence to clashes between gangs.

Two inmates died by hanging, and prison officials said one of those was alone in a cell with the lock jammed from the inside. A Department of Corrections statement said the other hanging appeared to be a suicide.

Reeves said the state is taking immediate steps to try to improve living conditions at Parchman, which he described as “terrible.” Multiple health department inspections have shown problems there, such as broken sinks and toilets, holes in cell walls and widespread mold and mildew in showers.

Reeves said inmates have found ways to jam the locks on some cells at Parchman, contributing to security problems.

All wardens and deputy wardens have been put on 12-hour shifts to ensure leaders are always present at Parchman, Reeves said. He said prison guards are being screened for indications that they might be involved in gangs. A Mississippi Bureau of Investigation agent has been assigned to work at Parchman to uncover criminal activity among inmates or employees that might have contributed to the violence, Reeves said.

“A lot of these things will seem like common sense,” Reeves said. “That's because they are. They've been needed for a long time, but we are starting from where we are."

Reeves said that during his tour of Parchman, he was near prisoners but did not speak with them. He said he was accompanied by security officers.

Department of Corrections officials have repeatedly told lawmakers in recent years that prison guards are underpaid and it's difficult to fill the jobs. They also requested more money to improve some of the buildings at Parchman. Budget writers turned down those requests. Reeves was lieutenant governor the past eight years and was one of the top budget writers.

Asked Thursday about his role in setting prison budgets, Reeves said he's not looking back but is focusing on fixing problems going forward.

“I've been appalled by things that I've learned in the last week, but proud of the potential that I've seen from many of the people working to rebuild,” Reeves said. “We've got a long way to go, but I can tell you with confidence that everyone in our administration is taking this very, very seriously. I'm not here to make empty promises. The issues within the department didn't happen overnight, and they won't be fixed overnight.”

Mississippi inmate with broken arm waits weeks for a cast

Mississippi inmate tries to hang self in cell, attorney says

'Shut it down,' protesters chant about Mississippi prison