Collins penned a note after House Judiciary Committee Chairman Jerry Nadler's comment about a “cover-up” by Senate Republicans for Trump, her spokeswoman confirmed. Senate rules ban senators from impugning each other.

Collins told WCSH-TV in Maine that the partisan debate had become “too personal” and went beyond simply arguing the facts. 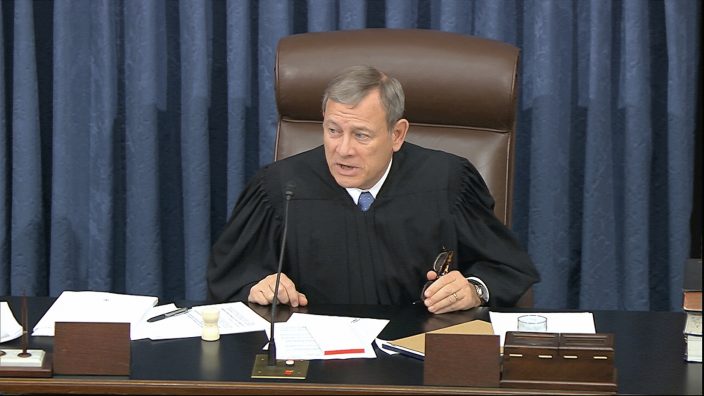 In this image from video, presiding officer Supreme Court Chief Justice John Roberts speaks during the impeachment trial against President Donald Trump in the Senate at the U.S. Capitol in Washington, Thursday, Jan. 23, 2020. (Senate Television via AP)

"I had heard both sides impugn the integrity of one another and also cast aspersions on the Senate," she said. “That is just not appropriate.”

After receiving the note, Roberts admonished both sides around 1 a.m. Wednesday.

“I think it is appropriate at this point for me to admonish both the House managers and the president's counsel, in equal terms, to remember that they are addressing the world's greatest deliberative body," Roberts said. He asked them to “avoid speaking in a manner and using language that is not conducive to civil discourse.”

Collins indicated afterward that she'll make her decision on impeachment on the facts that are presented, and said Nadler's comments won't affect her decision.